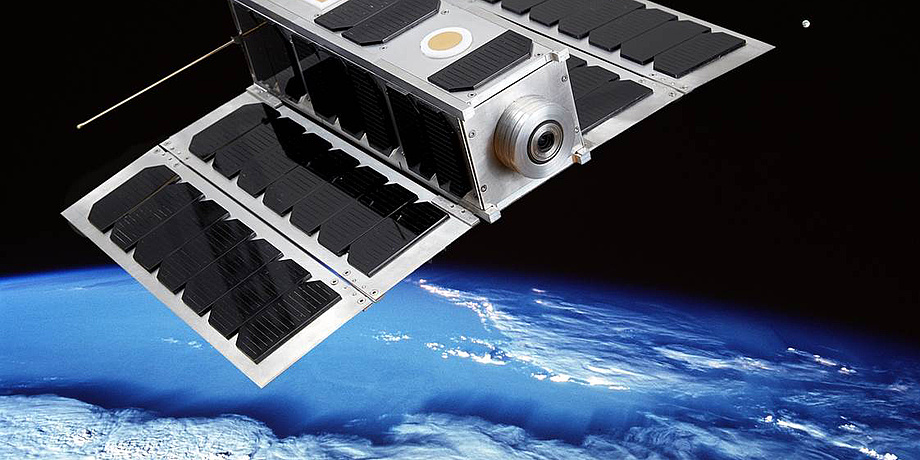 Flying space-laboratory: The ESA-satellite OPS-SAT is about to launch into space in 2017. TU Graz is primarily responsible for ESA's first nanosatellite mission.
On 4 October 1991, in a classical Austrian way, the Vienna Philharmonic Orchestra played the Blue Danube by Johann Strauss as Franz Viehböck, the one and only Austrian cosmonaut to go into space, glided into the Soviet space station “Mir”. Willi Boskovsky, the longtime conductor of the Vienna Philharmonic Orchestra, would have definitely been proud of his nephew. But not of Franz Viehböck, but rather Willibald Riedler. Proud of the man who had overall scientific responsibility for the Austrian-Soviet mission, and had earned the sobriquet “the pope of space”. A name he doesn’t like. He prefers to be called the “space professor”.

In autumn 2015 the next space success for TU Graz was bagged. As partner in the ESA-mission JUICE, TU Graz is involved in an exploratory tour to the outer limits of the solar system – to Europa, Ganymede and Callisto, the three ice moons of Jupiter. Under the icy surface of the Jupiter moons, giant oceans of water are suspected. Eleven scientific measuring instruments are being developed worldwide for this mission. Together with the Space Research Institute (IWF) of the Austrian Academy of Sciences, a team led by Roland Lammegger of the Institute of Experimental Physics of TU Graz is responsible for the novel quantum interference magnometer on board JUICE. The group from TU Graz is developing the optical sensor system of the magnometer, and the Space Research Institute will contribute to the space-compatible electronics. By means of the magnetic field measurement, researchers will be able to proverbially see into the moon. Where electrical fields flow, magnetic fields stand out – provided there are electrically conductive layers, such as water. The conductivity of the layers can lead to conclusions about the internal structure of the heavenly body. Some eight years after the launch from the spaceport in French Guiana, the JUICE probe will reach the gas giant Jupiter in 2030. From the point of view of ESA, the JUICE mission has the same status as the successful Rosetta mission. And from the point of view of TU Graz, every space mission in which persons from TU Graz are involved are moments of magic and proof that reaching for the stars is also possible from Styria.
TU Graz space research is mostly grounded in the Field of Expertise „Information, Communication & Computing“.
Susanne EIGNER
Communications and Marketing
Rechbauerstraße 12
8010 Graz, Austria
Phone: +43 316 873 6066
Mobile: +43 664 60 873 6066
susanne.eigner@tugraz.at