TU Graz highlights new features in the Smart City project “STELA”. Instead of relying on high tech for the thermal refurbishment of existing multi-storey buildings, social compatibility returns to the centre stage of the project. 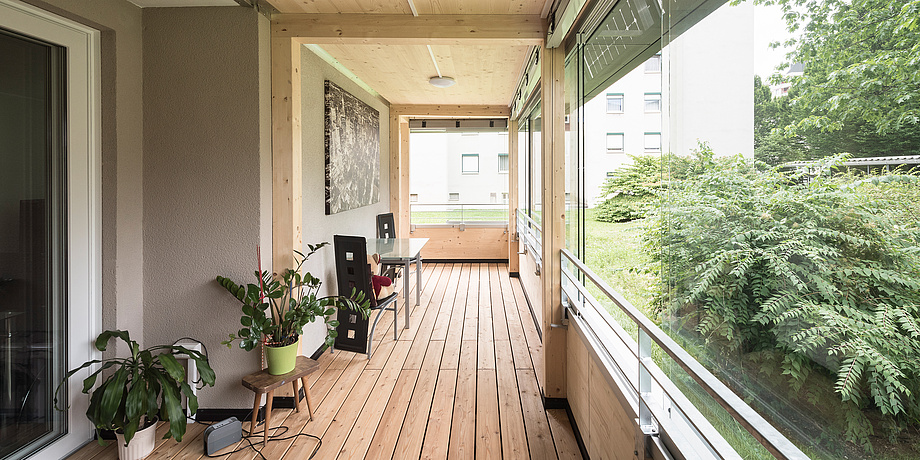 Inside the new, luminescent room.
Anna has now got more room. A wheelchair user, she lives on the ground floor of an 11-storey house in Leoben. In the framework of the Smart City “STELA” project, the prototype of a thermal shell was installed on Anna’s apartment in March 2017: a habitable steel-wooden shell with glass and photovoltaic elements. In summer the new 30-m² space serves as a terrace; in winter as a conservatory. Due to this envelope, thermal energy demand has been lowered by three quarters, and as a consequence CO2 emissions reduced by almost 60%. And the wonderful thing is, the construction by which old, multi-storey buildings can be upgraded is as efficient as and only marginally more expensive than conventional insulation using composite sheets which implement no added living space..

STELA stands for “Smart Tower Enhancement Leoben Austria”. The project was started in 2013 in a housing estate near the centre of Leoben, with the brief to find an innovative solution for the thermal refurbishment of houses which would in turn upgrade the district and attract new tenants. Here you are only five minutes away from the main square of Leoben without having to jump into a car – keyword “soft mobility”. The housing development consists of ten apartment houses, each of five to eleven storeys, which contain more than 300 dwellings, every one with a uniform layout of 75 m² designed for the two-child family of the 1970s. The task of the project team of TU Graz was to find ways of responding to today’s changed living space demands. This aspect was quite easy. A variety of layouts were developed which can be implemented at relatively little cost for the flexible adaptation of the dwelling size. But the project team had to go down a much longer route to find a suitable answer to the question of appropriate thermal refurbishment. 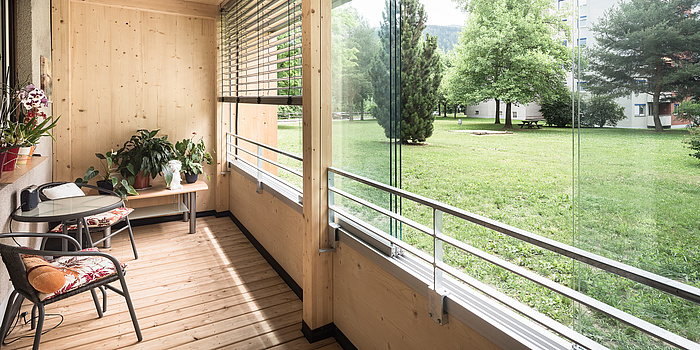 The bright 30-m² space may be used as a terrace in the summer and as a conservatory in the winter.
“Our first idea was to create a new shell for the houses which would yield the same savings as conventional refurbishment using heat installation composite plates,” explains project leader Hans Gangoly, head of the Institute of Design and Building Typology. “Originally, we wanted to combine current developments in materials in this approach, such as high-performance concrete, and also draw on possibilities for digital control. But the technical solutions were not affordable for the residents of the housing development,” says Gangoly. During consultations with the tenants it became clear very quickly that the affordability of such a concept was key for it to be accepted. The aspect of social compatibility thus became the focus of our efforts. A hotline and a dialogue office was set up in the housing development in 2014 to inform people about progress in the project and also to receive any suggestions. As a crowning initiative, in early 2017 an “e-lobby” was opened in one of the houses where tenants could borrow e-bikes free of charge. 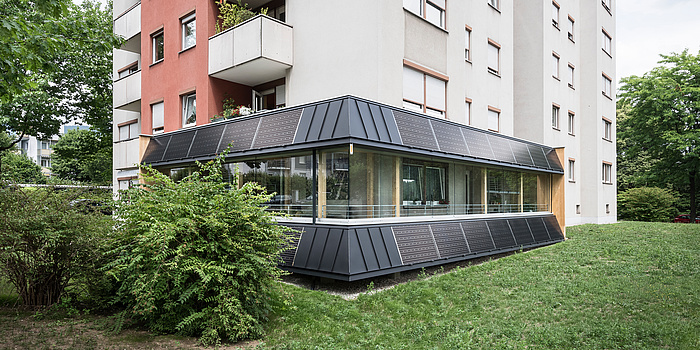 The thermal shell: a steelwooden shell with glass and photovoltaic elements was installed on the surface of the building, which drastically lowered the energy demand.

On the design side, we gave top priority to the issue of costs. The architectural team developed conventional steel-wooden constructions for the thermal buffer zone which would enlarge the living space outwards. In the model, these modules go round the residential floors like glazed, divided running balconies and form a new facade. Single glass panels which reach up to the ceiling allow sun and thus heat into the created space. Two thirds of the glass surfaces are moveable and thus provide the necessary fresh air supply and heat equilibrium. And if this were not enough, the house produces enough electricity for its own use by means of photovoltaic elements attached to the glazing on the east, south and west sides of the building. “One realisation we gained from the project was that not every objective can be achieved through technical solutions alone,” sums up Hans Gangoly. “Innovative building solutions only achieve added value for society when people can afford them.” This was achieved with STELA. If you calculate costs against savings in the pilot project – for the thermal shell with its additional 30 m2 surface area, the rent increases in the cheapest case by 24 euros per month. In comparison, a conventional thermal refurbishment increases the rent by 13 euros but brings with it no added value apart from increased energy efficiency. 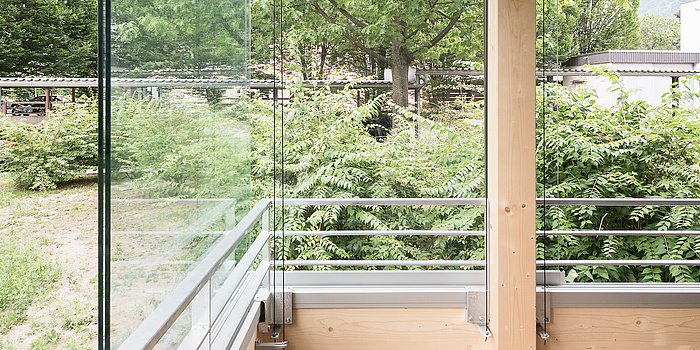 The view from the new space onto a little park is breathtaking.
However, and this is the bitter pill which STELA has to swallow, the residents of the housing development in Leoben voted against taking up this innovative refurbishment of their apartment houses. The municipality of Leoben as housing developer of the estate has therefore shelved the project. However, other residential housing developers have shown interest in the thermal modules which were developed in the framework of STELA. “Housing estates like this one, very well situated but no longer up to contemporary standards, can be found in every Austrian town,” says Hans Gangoly. “Our model could be of interest for very many councils and housing developers. If we make our approach even more systematic, the module can be produced even more cheaply. It can be built on quickly even now.” For example, Anna only had to move out for two days while the prototype of the thermal shell was built onto her apartment. Now she’s got more space and is the only person on the estate to have a bright additional room where she is very happy to spend time.