Lia Gruber: “Find the woman in the lecture hall”

Lia Gruber studied Electrical Engineering at TU Graz. In the lecture hall, she was one of only a few women. Why she no longer wants to hear any questions about it and how she is doing in research today. 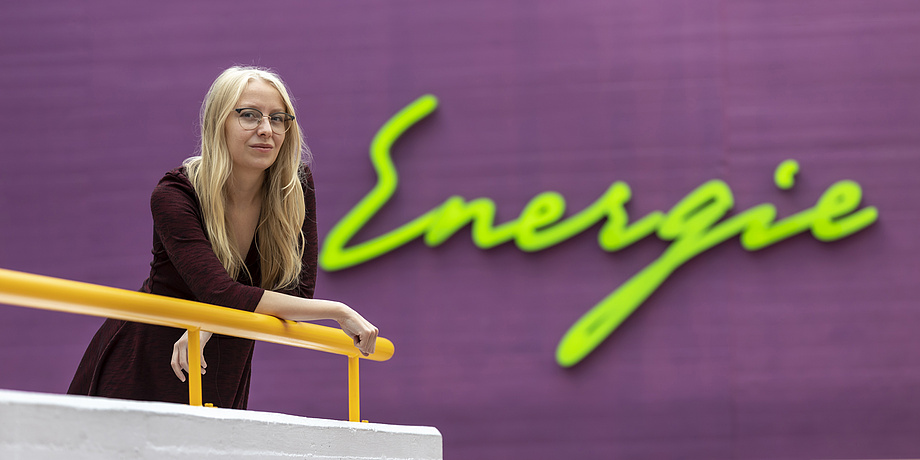 Lia Gruber is a university assistant at the Institute for Electricity Economics and Energy Innovation at TU Graz. © Lunghammer – TU Graz

News+Stories: Lia Gruber, what exactly bothered you when people asked you why you chose to study here?

Lia Gruber: I never got the feeling in the lecture hall from my colleagues and also from the teaching staff that my gender was an issue. Of course, there was the occasional stereotypical nerd who hadn’t had a woman in his class for years and was overwhelmed by the situation. But no one ever gave me a bad feeling.

Outside the university it was a bit different, and there were one or two incidents. The question is whether I wouldn’t have heard similarly stupid statements if I had been studying to become a teacher, which is what I had actually planned to do. There were the “no-offence-intended” type of questions. The first one was always: “Are you studying electrical engineering? That’s really hard, isn’t it?” This is a question that my male colleagues have never been asked. And the next one was always: “But there aren’t many women there, are there?” No, really? Of course, these questions are not meant in a bad way, but there is always a bias behind them. Towards the end of my studies, I just couldn’t hear them anymore.

The first question was always: “Are you studying electrical engineering? That’s really hard, isn’t it?” This is a question that my male colleagues have never been asked.

You have already mentioned briefly that your path to electrical engineering was not a straight one. You didn’t graduate from an HTL (note by editor: higher technical college), but from a BORG (note by editor: a type of grammar school) with a focus on theatre and you actually wanted to become a teacher. Even if you don’t want to hear it any more, why did you choose to study Electrical Engineering?

Gruber: It was not as far away as many people think. When I decided on a school, I was very close to going to a HTL with a focus on computer science. But I ended up going to a BORG. And my dream was originally to become a teacher, to teach mathematics and history.

In a series of interviews starting on March 8, Graz University of Technology will focus on the career opportunities and challenges of women in studies, research, teaching and business. Women at different career points talk about their personal experiences. Click here for the interviews with computer scientist Johanna Pirker, experimental physicist Birgitta Schultze-Bernhardt and TU Graz graduate Esther Lind.

How did your change of mind come about?

Gruber: I like to be prepared and do a lot of research – maybe that’s why I ended up in research (laughs). That’s why I attended lectures via “Studieren probieren” (note by editor: Try out studying) to find out more. A chemistry student I knew tried to convince me for a long time about technology and TU Graz, because he thought I would be in very good hands there. And because you even got time off for the lectures at school, I simply sat in on an electrical engineering lecture. Professor Renhart held the course and I still think it’s very presentable. It is motivating, has a nice whiteboard representation and a certain blarney. And that made me think. Because environmental protection and climate change are also very important to me. In the 8th class semester, I decided against the teaching profession and in favour of electrical engineering.

You should be prepared that everyone will know you – other students, as well as professors. Female students and researchers should use this attention for themselves.

Women are still in the minority in electrical engineering studies. Did you have any problems being one of the few women in the lecture hall?

Gruber: No, not at all. But you should be prepared that everyone will know you – other students, as well as professors. Female students and researchers should use this attention for themselves. For example, when I’m at a conference and I speak up, I get a very different kind of attention than my colleagues. That’s just a fact and I’ve learned to make it work for me if I can’t change it.

Apart from the increased attention, do you feel treated equally?

Gruber: I think a lot about how colleagues treat me. Whether it is assumed that I write minutes, whether I am allowed to finish speaking or whether a colleague says something that I have just explained. And I have to say that I analyse a lot, but as a rule such things hardly happen at all. And I am very happy about that. I think it’s very important to network with other women while you’re still studying – and afterwards, too. To find like-minded people. “Find the woman in the lecture hall,” so to speak, (laughs).

Did you feel that there were advantages or obstacles for you as a woman that your male colleagues did not have?

Gruber: I didn’t feel that during my studies. But I did notice the difference between my colleagues from an HTL with a focus on electrical engineering and my AHS education. For example, they had simply heard about the topic of transistors before, and it took me longer to understand it this one time. But it got exciting when I was looking for a job. I quickly went from being a fellow student to a competitor.

How did you experience this male competitive behaviour in concrete terms?

Gruber: It was said very quickly that I would get the jobs at the university I was applying for as a woman anyway because the university wants to boast about it. I even heard this from colleagues who had not even applied for my job. It’s quite fascinating how quickly some men feel intimidated by a woman. And I always think to myself: I’m at the beginning – you don’t have to be envious quite yet. Just wait a few years first, then you can!

I am more concerned about looking ahead, more in a structural sense. It’s already difficult enough as it is to make a career in research. There are many temporary contracts and project work. As a woman, you think twice about whether you want to do that if you have a child. Or whether you can then afford to be off for maternity leave. Many women give up research for this reason.

It’s quite fascinating how quickly some men feel intimidated by a woman. And I always think to myself: I’m at the beginning – you don’t have to be envious quite yet. Just wait a few years first, then you can!

You have always had female managers at TU Graz. What does that mean to you?

Gruber: After my matriculation I was looking for an internship in technology. But with my AHS school-leaving certificate I couldn’t find one. Then indirectly I came across the FiT internships (at that time “FiT – Women in Technology”, today “T³UG - Teens meet Technology”) at TU Graz. At the time, I was working at the Electric Drives and Machines Institute, which Annette Mütze heads. As a 17-year-old, it was incredibly impressive to see this woman at the head of an institute. And she always gave me the feeling that I was in exactly the right place here. I then worked for her for five years during my studies. And today I have another impressive boss in Sonja Wogrin.”

Role models are incredibly important. It’s always good to see that there are people doing these great things who are just like me. It is also important to network with women. If only to share experiences and discuss what problems might be related to gender.

At the time, I was working at the Electric Drives and Machines Institute, which Annette Mütze heads. As a 17-year-old, it was incredibly impressive to see this woman at the head of an institute. And she always gave me the feeling that I was in exactly the right place here.

Can you estimate what has already improved for women in technology?

Gruber: What is very impressive today is the self-confidence of the female university entrants. We recently had a networking evening with first-semester students and professors. And a young student just went up to Sonja (Wogrin) quite naturally and started chatting with her. The whole room was amazed at how casually and naturally she did that. But that’s exactly how it should be.

Lia Gruber talks about her research.

Lia Gruber is a university assistant at the Institute of Electricity Economics and Energy Innovation at TU Graz. She graduated from a BORG secondary school with a focus on theatre and then studied Electrical Engineering at TU Graz. Today, her doctoral thesis focuses on energy communities and citizen participation in energy production.