She was on the Forbes list of the most interesting “30 under 30” and wants to give technology a female face. TU Graz researcher Johanna Pirker on rational decisions, women’s quotas and careers. 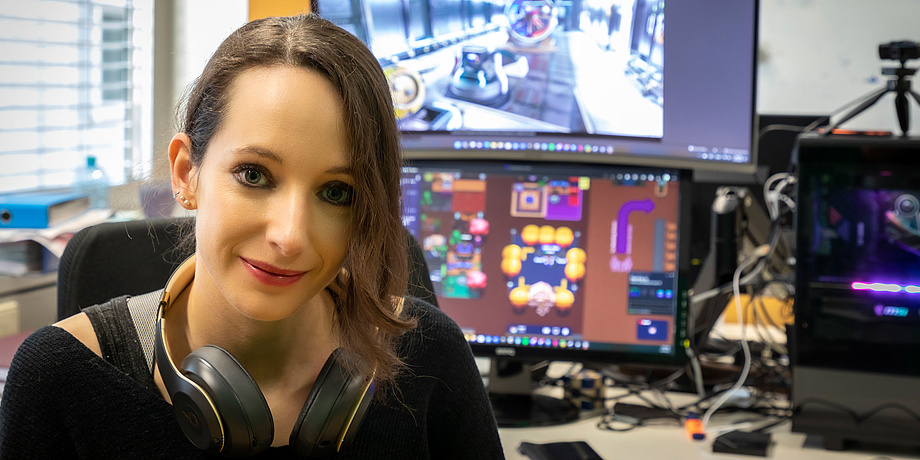 Johanna Pirker is an assistant professor at the Institute for Interactive Systems and Data Science at TU Graz, where she heads the Game Lab Graz and conducts research in the field of computer games. © Lunghammer - TU Graz

Johanna, you are one of the best-known personalities currently teaching and doing research at Graz University of Technology (TU Graz). Did you have a career in computer science in mind right from the beginning?

Johanna Pirker: It was always clear to me that I would study at university after I left school. In retrospect, it was a sensible decision to choose computer science rather than psychology, music or chemistry. I didn’t know what to expect – so the field was like a big surprise box that contained everything I’ve always liked to do: from art to collaboration with psychology and sociology to mathematics. Working on and with these interfaces is simply immense fun.

Although I read somewhere that mathematics was not one of your favourite subjects at school...

Pirker: I was not particularly talented in maths and struggled with some topics. So my jump from grammar school to TU Graz was not the most obvious one for many.

How did people in your circle react to this?

Pirker: No one knew what computer science was exactly. But my family was behind me. Nevertheless, there also remained a lot of scepticism. I knew some of my fellow students from before; they all came from the HTL (higher technical college). Compared to them, I struggled at the beginning. Especially in the first year, I had to catch up a lot.

In a series of interviews, Graz University of Technology focus on the career opportunities and challenges of women in studies, research, teaching and business. Women at different career points talk about their personal experiences. Click here for the interviews with computer scientist Johanna Pirker, experimental physicist Birgitta Schultze-Bernhardt and TU Graz graduate and president of “WomenUniverse” Esther Lind.

One hears again and again that the path to a technical subject is easier with an HTL certificate than with an AHS school-leaving certificate, and that boys have an easier time studying technical subjects than girls. Is there more than a grain of truth behind these statements?

Pirker: Honestly, it’s rubbish. I think it is precisely because of such prejudices that many people don’t choose technical studies. What is obvious is that we simply need more women in technology.

What would that change?

Pirker: Our world would become more diverse and thus fairer. I am convinced that sexism is not always intentional, but is supported by narratives. To give an example from the gaming scene: diverse characters are often missing, the heroes are mostly male, the story often revolves around women in distress waiting for the male hero to finally save them. In diverse teams it is quickly pointed out that some role models are inappropriate and such images of women would not be encouraged.

I am convinced that sexism is not always intentional, but is supported by narratives.

Do you see any other ways to eliminate such gender stereotypes?

Pirker: We have to start at an early age. It’s too late at school or university. I myself also grew up with many clichés, especially in computer games that I was allowed to play at a very early age. I saved princesses as the Prince of Persia or the plumber Super Mario and was presented with these traditional role models of the “strong man” and the “helpless woman”.

A lot has happened in the last few years...

Pirker: In the gaming scene, absolutely. Today princesses save the prince or other princesses. The old gender roles are losing more and more relevance here. We’ve reached the point today where it’s okay for girls to play with cars or laser swords...

Pirker: There’s still a lot of room for improvement. Everyone should be allowed to play with the toys they enjoy and also wear what they like. Conversely, why is a man not allowed to wear a dress, for example? I can’t understand how in our modern world we still hold onto such role models, and that such a thing is so absolutely frowned upon socially. We have to eliminate such prejudices from people’s minds and that is why the fight for equality is so important to me..

Keyword “alone”: female students are still a minority at universities of technology. How was that for you? Did you have any difficulties with it?

Pirker: Not during my studies. Certainly, you stood out more if you were one of the ten female students among the 100 students in the lecture hall. But I never really felt treated differently or made to feel that gender made a difference. And that’s where we need to get to as a society. That no one is preferred or disadvantaged because of their gender, and that it is only the quality of the work counts.

How do you see the quota system in this context?

Pirker: I know I’m repeating myself, but for a fairer, more diverse world, we need more women in male-dominated occupations. The quota system is absolutely important and necessary at the moment. But it is equally important to recognize the achievements of successful women. Because the women’s quota does not mean that you get something just because of your gender, but mainly because you are good at what you do.

The women’s quota does not mean that you get something just because of your gender, but mainly because you are good at what you do.

Finally, as a female role model, do you have any tips on how girls and young women can make a career in technology?

Pirker: Don’t be guided by prejudices, but try it out, get a taste of it, be brave. Or as Aloy (protagonist of the computer game Horizon Zero Dawn) would say: “Comforts are weakness.”

"WomenUniverse", the alumni women's network of TU Graz, is a forum for graduates, students and all women interested in the connection between science and business. Regular activities (live and online) offer women at different stages of development in their professional and career planning the opportunity to exchange ideas in a protected environment, to make contacts and to stay a bit closer to TU Graz.
If you are interested, please register via frauennoSpam@alumni.tugraz.at. More information on the network and current dates can be found on the WomenUniverse website (German only).

In an interview with University-Podcast AirCampus, Vice Rector Claudia von der Linden and WomenUniverse President Esther Lind talk about the goals of the initiative: Run the world (girls) (Audio Clip in German)

Johanna Pirker is an Austrian computer scientist and an assistant professor of games engineering at TU Graz and conducts research in the field of computer games with a focus on artificial intelligence, human-computer interaction, data analysis and virtual reality technologies. In 2018, Forbes magazine listed her as one of the most interesting “30 under 30” in science and healthcare. In 2019 she won the “Women in Tech” award and in 2019 the Hedy Lamarr Prize of the City of Vienna.