She was “a wild one” as a child, loves the smell of metal and uses challenges as open doors. TU Graz graduate Esther Lind on technical studies, prejudices and her career in a male domain. 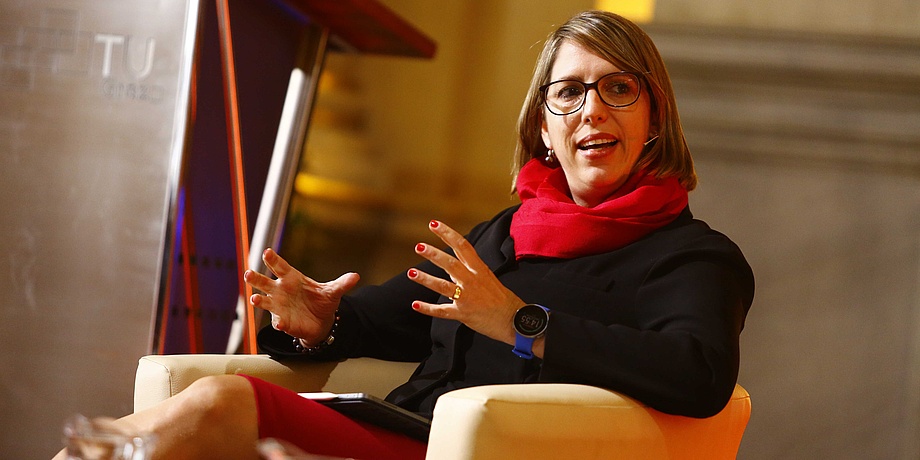 Esther Lind, TU Graz graduate and president of “WomenUniverse”, a forum for women in the alumni network of TU Graz, advises women who want to be successful to seize opportunities when and where they arise – especially when it is difficult. © ClemensNestroy – alumniTUGraz1887

News+Stories: You hold a management position in the Salzburg Aluminium Group (SAG). Had you always planned to have a career?

Esther Lind: Yes, that was already very present in my childhood, this aspiration to lead people and later to do well in professional life. I had already set my sights on it in my studies, in my training and then also in my professional life.

In a series of interviews starting on March 8, Graz University of Technology will focus on the career opportunities and challenges of women in studies, research, teaching and business. Women at different career points talk about their personal experiences. Click here for the interviews with electrical engineer Lia Gruber, computer scientist Johanna Pirker, student Christina Fior and experimental physicist Birgitta Schultze-Bernhardt.

Were there any role models in your youth?

Esther Lind: Few, at least I had no female role models. What always fascinated me was the world of Formula 1. That was a major impetus why I ended up studying mechanical engineering. And there were perhaps even fewer role models regarding mechanical engineering, but there were some supporters, or simply people in my environment, at home, but also at school. Some who were very supportive of my choice of studies – Mechanical and Business Economics, and others who were very questioning of that choice.

Under these circumstances, how did you decide to study Mechanical Engineering and Business Economics?

I have always listened to people who were supportive and tried to block out those who sowed doubts.

Esther Lind: I hardly had any “girlie interests” as a child. I liked to take apart everything that could be taken apart in any way, I played with cars, I was in the forest, I was simply a wild one – and also very sporty. Nevertheless, I actually wanted to become a lawyer. Because there are already many of them, a lawyer friend recommended that I look at MINT studies, that is, mathematics, computer science (informatics), natural sciences and technology. My father finally suggested mechanical engineering. And I thought to myself, if he trusts me to do this, then it will work out. I have always listened to people who were supportive and tried to block out those who sowed doubts.

And was it the right choice for you?

Esther Lind: Absolutely. I still get excited when I go into Production, smell metal, see the machines, learn to understand how new technologies work. That is still something I love.

Offers for girls who want to find out about technical or scientific studies at Graz University of Technology (TU Graz), get a taste of university life in summer internships or master their first programming steps on the computer can be found on the TU Graz website "For Young Women and Girls".

Did you encounter doubts or prejudices as a student in mechanical engineering?

Esther Lind: Not so much – which surprised me when I started studying in 1998. Except for one or two lecturers, I experienced the opposite – a lot of joy, also from the professors, about female students in mechanical engineering. And one advantage of that, of course, was that when I was in the lectures, I was also more easily recognized in the exams. I thought at the time that there was actually no equality issue at all.

And later at work, as a woman in a leadership position?

In order to be perceived on the same par, women have to build up a lot of competence.

Esther Lind: Different rules apply in professional life compared to university. My experience was that qualities that are considered masculine are perceived differently in women – such as self-confidence or leadership. They often get a different attribute and are not valued as positively as they are in young men. Women are judged much more on performance and not so much on impact. More is expected. In order to be perceived on the same par, women have to build up a lot of competence.

How did you react to the fact that characteristics or behaviours are valued differently for women than for men?

Esther Lind: I was socialized in a male-dominated environment and recognized certain behaviours, including a certain toughness, also in the metal industry. I acquired these behaviours in order to push through certain concerns – only to realize that if I behave like this, it will be misunderstood. But if I show my feminine side, it is valued less. I reflected on this and talked to my coach about it. And I realized that I had to come back more to myself and to my own leadership style, independent of the environment. Getting there was a process. People often slip into behavioural patterns without being aware of it.

You sought out a coach for your career?

Esther Lind: Yes, after a certain career level or after starting a career at a certain age, I would recommend to everyone to find somebody for exchange and reflection. I work with different people on different goals. For me, this is a way of permanently having my finger on the pulse of the right perception.

After a certain career level or after starting a career at a certain age, I would recommend to everyone to find somebody for exchange and reflection.

Were you able to access existing support, advice or funding services or did you have to seek this support yourself?

Esther Lind: Support during my studies – that didn’t really exist then – or I didn’t find it. Back then, I actually entered professional life a bit naively and went to the company for which I had written my thesis right after graduating. With the delayed effect of the Lehman Brothers crisis in 2010, there was the possibility of a sabbatical. I was new to a management role at the time and spent the sabbatical learning about team leadership. I used the opportunities to further my education from within the company to build up an advice and coaching network for myself.

Have you experienced differences in your career between your opportunities and hurdles as a woman and those of male colleagues?

Esther Lind: I think there are hurdles for both. They may be different for women than for men in the development of their careers. I have learned not to be deterred, and to deal with hurdles as they come. Everyone has a certain burden to carry. It is better to look for creative solutions than to remain stuck in front of an obstacle. And as soon as a door or window opens, just walk through.

It is better to look for creative solutions than to remain stuck in front of an obstacle. And as soon as a door or window opens, just walk through.

You are the president of “WomenUniverse”, a forum for women in the alumni network of TU Graz. Why are you committed to this?

Esther Lind: I would like to give something back to my university, TU Graz, from which I benefited through my education. And there is a great energy to achieve something for women together with the other women proponents. In WomenUniverse, we pursue three major goals: supporting students during their studies, increasing the number of female students at TU Graz, and providing mutual support for female graduates through the idea of networking.

What significance do such networks have for women’s careers?

Esther Lind: In the growing WomenUniverse we have meanwhile learned that there is a need for it. There are issues that affect us as women differently than perhaps our male colleagues. In the network, female graduates support each other with such issues. Especially in the female context, it is often not only career planning that is at stake, but above all life planning, which has to integrate career planning.

WomenUniverse, the alumni women’s network of TU Graz, is a forum for graduates, students and all women interested in the connection between science and business. Regular activities (live and online) offer women at different stages of development in their professional and career planning the opportunity to exchange ideas in a protected environment, to make contacts and to stay a bit closer to TU Graz.
If you are interested, please register via frauennoSpam@alumni.tugraz.at. More information on the network and current events can be found on the WomenUniverse website.

What do you think needs to change so that more women take the path towards technology and science?

Esther Lind: There needs to be more visible role models; women who speak out publicly. And it is up to the parents, the families, to arouse their children’s interest in technical tasks, to show girls a diverse spectrum as well – for example, through toys that are not bought according to gender – and to explain as many different topics as possible. This already starts at kindergarten and primary school age.

What does it take for women to then also embark on a successful career path?

Esther Lind: I believe that we need much more flexible job-sharing models. There are, for example, very good and reality-tested models in Sweden. Some sectors, such as information technology, are also moving in this direction in Austria, while industry is still lagging behind. And there always needs to be dialogue. And there need to be visionary men who want to create change, just as there need to be visionary women. Of course, politics is also called upon to create the legal framework.

Is there anything you want to pass on to young women?

Esther Lind: Seize your opportunities when and where they arise – especially when it is difficult. These are precisely the open doors to the next career level when others are shy of a challenge. Success is not a question of special intelligence, but of special interest.

Seize your opportunities when and where they arise – especially when it is difficult. (...) Success is not a question of special intelligence, but of special interest.

Born in Upper Austria, she studied Mechanical Engineering and Business Economics at TU Graz and started her career at Böhler Schmiedetechnik. After moving to Voestalpine High Performance Metals, she first managed corporate strategy and business development and later business transformation. Since 2022, Esther Lind has been in charge of worldwide sales and new business at the Salzburg Aluminium Group (SAG), a global player with 12 locations in 9 countries. In addition, she is developing new fields of ideas based on customer focal points and problems through corporate innovation. As president, she has been helping to set up the “WomenUniverse” alumni network at TU Graz since 2020.