Christina Fior is studying Biomedical Engineering at TU Graz. In an interview, she explains why role models are so important for young women. 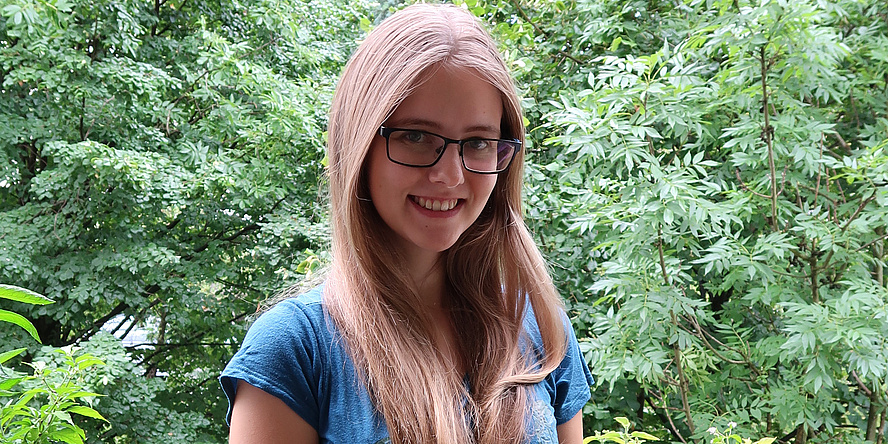 News+Stories: You work at the Women's Policy and Equality Unit at the Students’ Union of TU Graz. Does this enable you to make a good assessment of how things stand regarding equality at Graz University of Technology (TU Graz)?

Christian Fior: Our main task is to make sure that no female students are discriminated against at TU Graz. And although this is our main task, it is actually also one of the tasks we have to perform least often. In most cases, this works very well at TU Graz.

The younger you are, the more important role models are.

How exactly do you advocate for women at TU Graz?

Fior: For example, we have an anonymous suggestion box. Students can send in their problems with tutors, teaching staff and other students. They can also indicate whether they want us to actively pursue the problem and seek a solution or whether they just want to tell someone about it. In some cases – for example, when there were stupid comments from other students – there is unfortunately little we can do as an office of the Students’ Union. But for further talks or activities, it is important that we know what problems there are basically in the lecture hall.

I personally also write articles on equal treatment issues and on women's policy concerns of the unit in the blog on the TU Graz website – such as interviews with female professors.

In a series of interviews starting on March 8, Graz University of Technology will focus on the career opportunities and challenges of women in studies, research, teaching and business. Women at different career points talk about their personal experiences. Click here for the interviews with electrical engineer Lia Gruber, computer scientist Johanna Pirker, TU Graz graduate Esther Lind and experimental physicist Birgitta Schultze-Bernhardt.

Reading about successful female professors can motivate young women on their journey into technology. How do you assess the impact of role models?

Fior: It’s very high. The younger you are, the more important it is. Every child has role models. In the beginning, these are parents or siblings. Later, people who appear in the media also take on this role. And that's where it's important to see people who have successfully taken the path you want to take yourself. The unknown is always a bit scary.

The unknown is always a bit scary.

Did you have role models yourself?

Fior: Yes, relatives who had already completed their studies – so I saw that studying was an option and possible in principle. But I never had just one role model, I picked up things from different people that were important for my overall image.

At TU Graz, the proportion of women is lower than at other universities. How did that work out for you?

Fior: I study Biomedical Engineering. This field of study has a special place at TU Graz because the proportion of women in it is very high. I would say it’s around 40 per cent. So I quickly had female and male friends.

I struggle more with the fact that there are a lot of tall people at TU Graz and I am very short. This always leads to visual problems in the lecture hall (laughs).

Do you feel that you are treated differently to your male colleagues?

Fior: I found it more of an advantage. In so far as there seemed to be more understanding that as a woman I had zero prior knowledge. I graduated from an AHS (translator’s note: a type of secondary school) and therefore had little technical background. Male colleagues who also graduated from an AHS were shown less understanding. Although they had never learned it, teaching staff somehow assumed that they had a better knowledge of electrical engineering.

You mentioned that you didn’t attend a technically oriented secondary school. So how did you find your way to TU Graz?

Fior: I did several summer jobs at TU Graz through the "Women in Technology” project. I had a lot of fun and the supervisors were very nice. It turns out that this is exactly the direction I want to go in.

How did your circle react to your decision?

Fior: They were very supportive. Only my grandparents thought that a technical degree was terribly difficult and still feel incredibly sorry for me when I have an exam (laughs).

In your opinion, what has to change for more women to pursue technical studies?

Fior: The attitude of society. It should be quite natural that young girls are also given a screwdriver and a hammer and help to build a tree house. Or that they get an electrical engineering kit as a gift. It’s not only boys who are interested in such activities. Many adults still have very gender-stereotypical ideas, especially with regard to presents. This then has a big influence on someone’s further course of life. At a young age, children don’t yet know by themselves what interests them. And then they are presented with gender-stereotypical things that they are supposed to be interested in.

Christina Fior is studying Biomedical Engineering at TU Graz; she is currently doing her Bachelor's degree, but soon her Master's. She is involved in the Women's Policy and Equality Unit at the Students’ Union of TU Graz.