Hunger at Campus Inffeld? Meals are freshly prepared on weekdays at the Inffeld Canteen Trudl’s Noodle Truck also relies on freshness with regional noodle variations to go and seats in the open. 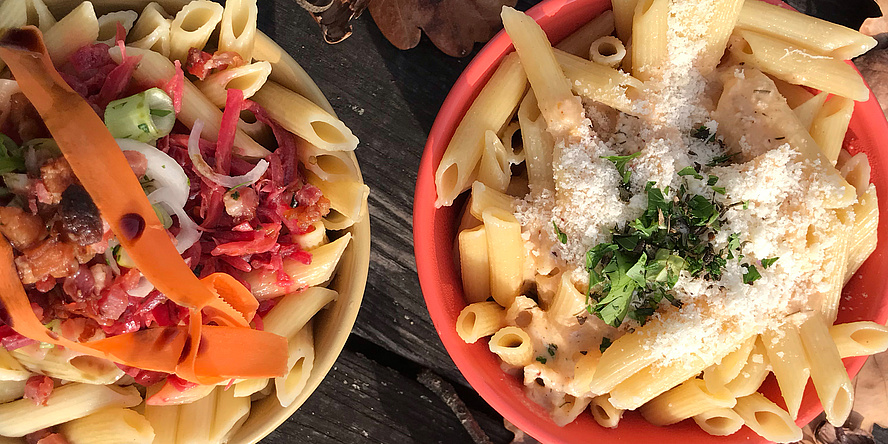 Campus Inffeldgasse is the fastest growing campus at TU Graz. The culinary choice is not quite increasing at the same pace as the campus building development, but Trudl’s Noodle Truck has been growing for several months. It’s worth a visit.

Don’t praise the noodles before tasting the sauce...

... is the slogan of Trudl’s Noodle Truck. The varied sauce compositions – each with a choice of a Styrian and several vegetarian variants – more than justifies the truck’s slogan. Reinhold and Eva Rodler spoil their customers with international pasta dishes in Styrian style for 5.90 euros, and for a supplement of 1 euro, you can have an XL portion. You can find them at ’Blue’ square (Blauer Platz) between Inffeldgasse 11 and 13 from Monday to Thursday. If you want to save on waste, you can order your meal in a ceramic bowl and pay a deposit. 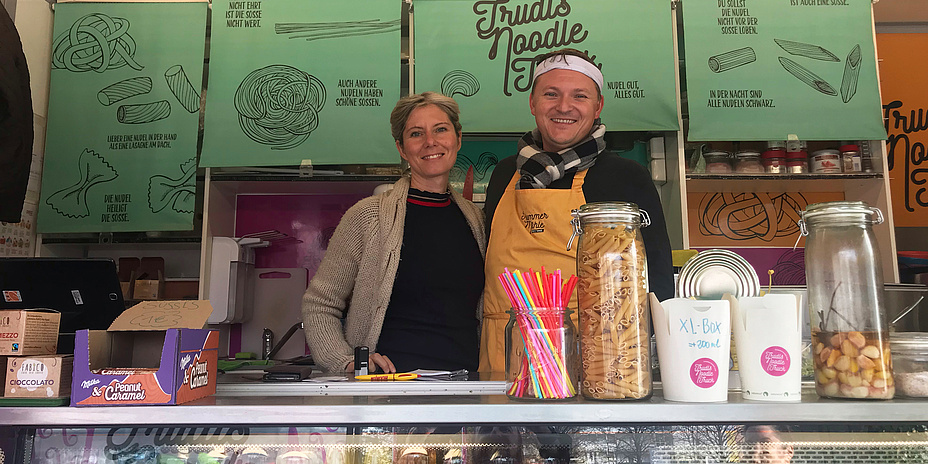 A warm welcome to Trudl’s Noodle Truck. The name doesn’t come from the proprietor but the Trummer Mill near Ilz, where the noodles come from.

When tasting the Styrian pasta with giant runner beans, beetroot and (optionally also without) bacon, it becomes immediately clear that these aren’t your usual ‘bog-standard’ noodles. The pasta products made of durum wheat or whole-grain spelt come from the traditional Trummer Mill near Ilz. The successful combination of Trummer and ‘Nudl’ lends its name to Trudl’s Noodle Truck.

Wide selection at the Inffeldgasse canteen

Traditional cuisine with meat or fish, vegetarian, curries and wok dishes. Nobody is sent away hungry from the Inffeldgasse canteen to the Study Centre at Inffeldgasse 10. Here, Chef Livio Gandolf and his team conjures up 700 to 800 meals onto the table on weekdays. Prices for a main meal are between 4.60 and 8.60 with soup and dessert extra. 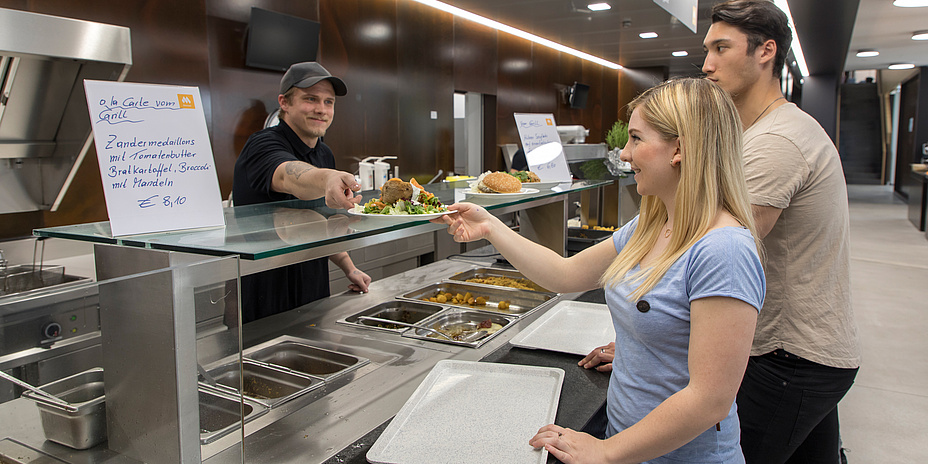 Openness and freshness is the concept of the canteen at Inffeldgasse. Dishes are prepared from regional products.

The weekly offer, prices and opening times of the TU Graz canteens and M-Café Inffeldgasse are on the website of Austrian canteens. Here is detailed information about the new canteen bonus club system.

You can find drinks and – in some cases – snacks in ten buildings at the Inffeldgasse location. Drinks vending machines from the provider ‘For 4 you’ quench your thirst with chilled drinks – from Coca Cola and iced tea to Cappy spritzz and Emotion. The Dallmayr automatic dispensers for hot drinks offer an astonishingly wide selection of sustainable take-away coffee and cocoa drinks. The milk-drinks vending machine from Veit Milch stops that between-meals hunger gap with mild and yoghurt drinks of different tastes. And there’s almost everything for in-between meals from the For 4 you drinks and snacks vending machines: from mineral waters, fruit juices, energy and soft drinks, chocolate and muesli bars, jelly babies, Manner Schnitten (Austrian wafers) and Zotter chocolate to peanuts and chewing gum.

Here is a list of all the vending machines in the Inffeldgasse: