By Karin Pichler and Christian Haintz

Christian Haintz and Karin Pichler have founded a start-up based on their master’s theses. They talk about their experiences, successes and everything they’ve learned as founders. 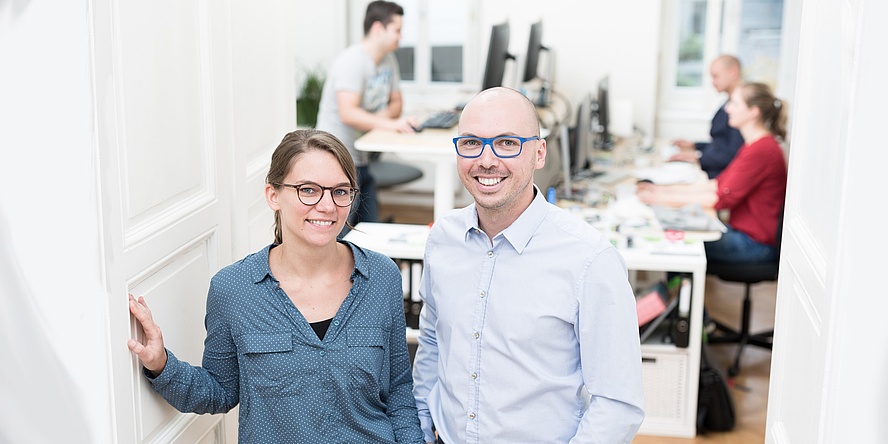 Founders of feedbackr: TU Graz Alumni Karin Pichler and Christian Haintz
When we developed the first prototype of our app, we had no idea that one day it would lead to a company. In 2011 TU Graz was looking for a tool which could make mass interactions possible in the lecture room. Our supervisor and mentor, Martin Ebner, who leads the TU Graz Educational Technology Unit, was at the time looking at the effects of interposed questions on learning results. This basic idea is founded on the ancient Greek teaching method of Socrates, in which the content is discussed to make it understandable to students over time. Since smart phones had just become universally popular, we decided together to bridge the hardware and ask the question: could we develop an application which every student could run on their own mobile? And our assumption was: yes we can! Accordingly, Karin began work on the first prototype of what today is feedbackr, while Christian developed a kind of orientation ticker for lectures. After we had done our master’s theses, we noticed that there was a need for such a product, not only in the teaching sector, but beyond. So we decided to continue to develop our mobile app and to offer it in a larger radius. The step to self-employment was never up for discussion. We knew we could still look for jobs if our enterprise should fail. And anyway, how high are your living standards just after you’ve finished university? On top of this, we had already been able to try out what it’s like to be an "entrepreneur" while we were studying. In 2007 we had founded Carrot Server and a few years later – once more with Martin Ebner – we conceived the Earth Puzzle Project. Carrot Server proved successful and became profitable after only one month. The Earth Puzzle Project failed because the idea was too ambitious for the resources we had available. Nevertheless we gained valuable experience from both, which we used in founding our present firm Carrot & Company in 2012, and developing feedbackr into a saleable product in 2014.

What we’re specially proud of today is that out of an "experiment" came a profitable company. One of the nicest responses we’ve had from our users was how simply and in a self-explanatory way our app works. This was our aim from day one we had feedbackr on the drawing board and started designing it for university teaching. We wanted to make an easy-to-handle and visually attractive application which had all the important functions and which we could optimise together with its users. 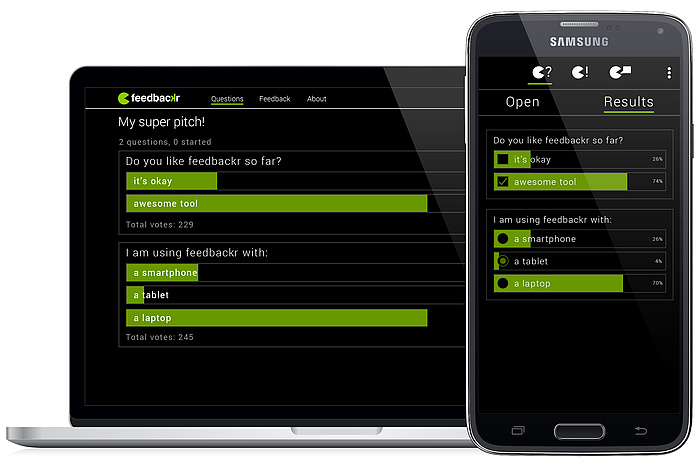 The feedbackr user interface on mobile devices. Teaching staff can respond directly to members of the audience by asking questions and have them voted on in the style of the Who Wants To Be A Millionaire game show.
Additionally, we see our biggest success and stroke of luck as our amazing team. Finding people who have a similar vision and who share the same idea of work-life balance is so valuable. We know that people are sitting here every day, enjoying their work, like us, and applying their energies and believing in an idea – all too often outside "normal business hours". We are so grateful for this. This is not really a nine-to-five job because sometimes we have a brilliant idea – not just before finishing time in the evening, but during the beer afterwards. 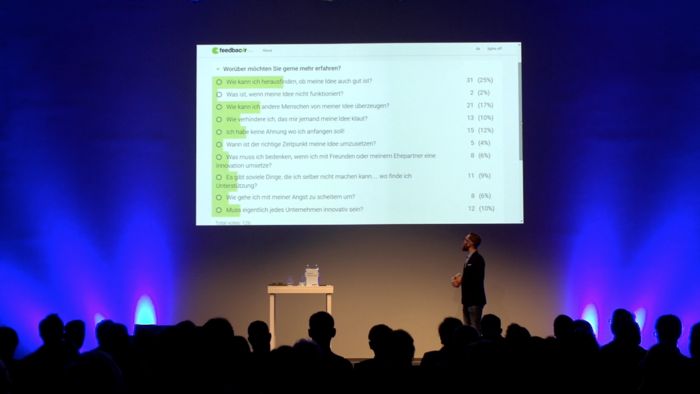 The feedbackr app is presented at the SME Ideas Night 2016 held by Erste Bank.

We’re currently working on an upgrade to feedbackr through which we want to implement the needs of our customers and users even more specifically. An edition for companies, one for events and one for lectures (lectures and teaching) are in the pipeline. We are often asked where we’re going to next, but at present we’re very happy being where we are. And since "our" capital, Vienna, is the second most popular conference city in the world, we still see a lot of potential in Austria for further development.
The feedbackr app can be used free of charge for educational purposes at universities.
Carrot & Company GmbH
Spabersbachgasse 26, 8010 Graz, Austria
Phone: +43 660 64 07 429
hello@feedbackr.io
www.feedbackr.io