The programming app “Pocket Code”, developed at the Institute of Software Engineering at TU Graz, is available in 40 languages and is being implemented in right-to-left languages. 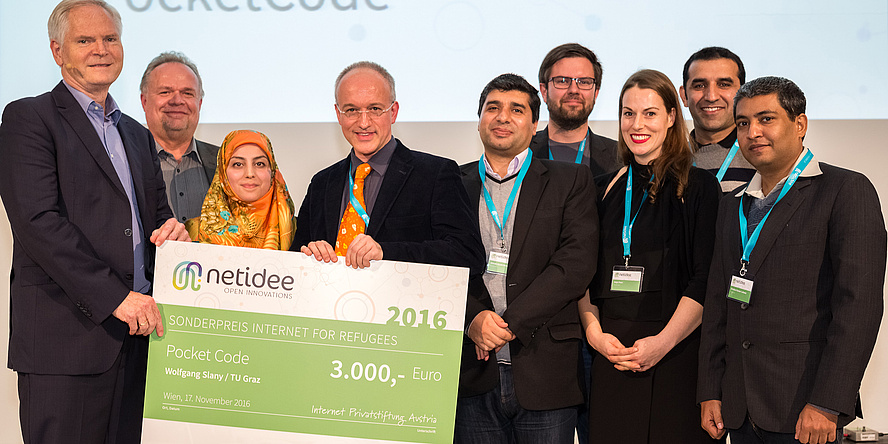 Getting to know software and programming in a fun way with Pocket Code. With TU Graz’s mobile phone programming app, children and young people can create their own games, animations, stories or music videos directly on their mobile phones using an intuitive, visual programming language.

The free app which has won several prizes has been made available in 40 languages and is now being implemented for right-to-left languages in the team led by Wolfgang Slany at the Institute of Software Engineering at TU Graz. The Internet Foundation Austria (IPA) has just awarded the app the “Internet for Refugees” special prize in the framework of the “netidee” (nice idea) awards by Austria’s biggest private internet promotion campaign. The expert on the jury and former member of staff of the United Nations High Commissioner for Refugees, Kilian Kleinschmidt justifies his decision: “The fact that young people with different cultures and languages come together is in tune with the spirit of the 21st century,” says Kleinschmidt.

Growing up with software and programming

Together with Samsung, TU Graz’s Catrobat team went on a tour of schools between June and October to familiarise more than 1000 children with programming in a fun way. “Software is an integral part of our society and will penetrate all areas of life much more in the future. With Pocket Code, you can learn about the internal mechanisms of smartphone apps intuitively without any previous knowledge. Even with my students, some of whom have no previous knowledge of programming, I start the first semester with Pocket Code,” explains Wolfgang Slany, head of TU Graz’s Institute of Software Engineering.