With courage and intelligence: 100 years of women at the ‘Tech’

Women were allowed to enroll in an Austrian institute of technology for the first time 100 years ago. But what did the first women at IT Graz study? And what became of them? Three women’s stories. 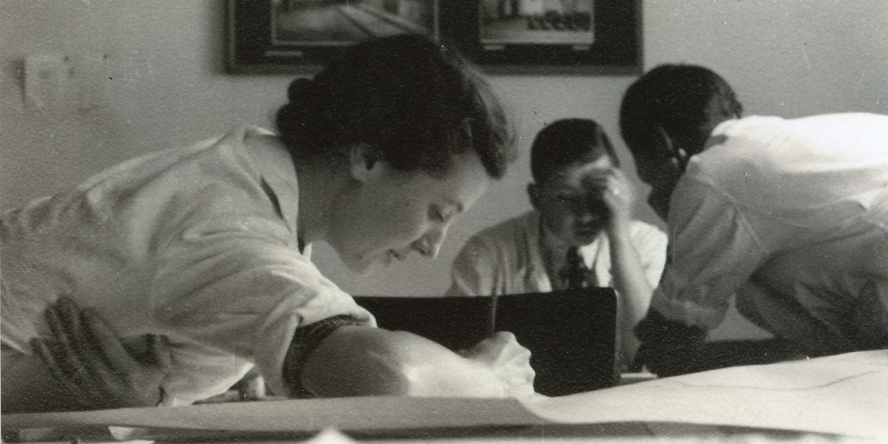 Profile of Anna Simidoff writing or drawing at a desk, bending the pages, in the background are two young men hunched together, also concentrating on working.

‘As a woman, you always have to start from scratch,’ stresses Herta Frauneder-Rottleuthner, one of the pioneers who dared to study at the former Institute of Technology of Graz – today’s Graz University of Technology – in the first third of the 20th century. Like other members of her sex, she took advantage of the legislation which allowed women to enroll at institutes of technology after 7th of April 1919 – as long as they did not take away any places from men nor damage any of the fixtures. The legal basis for this was the decree introduced by the social democratic secretary of state for teaching Otto Glöckel.
As early as 1916, a questionnaire had been undertaken by the ministry of education and teaching relating to the future of higher education institutions. 75 per cent of the Graz professorial council were in favour of women studying at the Institute of Technology of Graz (IT Graz). This was unique in the Austrian half of the kingdom (the other half being Hungarian) even with its seven eligible universities. In particular at the ‘School of Chemistry and Technology’ and the ‘School of Architecture’ of IT Graz, there were many open-minded professors and lecturers in the 1920s, who thought in a very modern way for that time, especially the architects Friedrich Zotter and Karl Hoffman as well as Friedrich Emich in chemistry. It was in these fields that the first women at IT Graz studied – women such as Herta Frauneder-Rottleuthner, who were very aware of their special situation. Frauneder-Rottleuthner, who was the first woman to complete her studies in architecture in 1935, discovered that it was especially difficult as a woman and an architect ‘because you had to be the best every day’.

The very first woman graduate of IT Graz, however, didn’t study architecture, but rather chemistry. This was Martha Spiera, who like Barbara Gyöngyössy, was admitted to the chemistry degree programme in 1919. They were the first regular students at IT Graz who were women. Spiera graduated in 1923 – with honours, and Gyöngyössy followed later the same year. They thus belonged to the roughly 70 women who completed their studies between 1919 and 1950. And they were a minority, because 80 to 90 per cent of women students at this time left the Institute of Technology of Graz without a degree.

The first women students came from the academic, upper middle class, and were daughters of university professors or daughters of businessmen who, due to missing sons, were planning for the succession of their companies.  Martha Spiera belonged in this group. The daughter of a merchant, she was born in Vienna on the 4 August 1897, and moved to Budapest with her family, where she studied chemistry between 1916 and 1919. After moving to Graz after the First World War, she took up her chemistry studies at the Institute of Technology of Graz in 1920 after accreditation of her earlier studies, and completed them with high grades, as already mentioned. 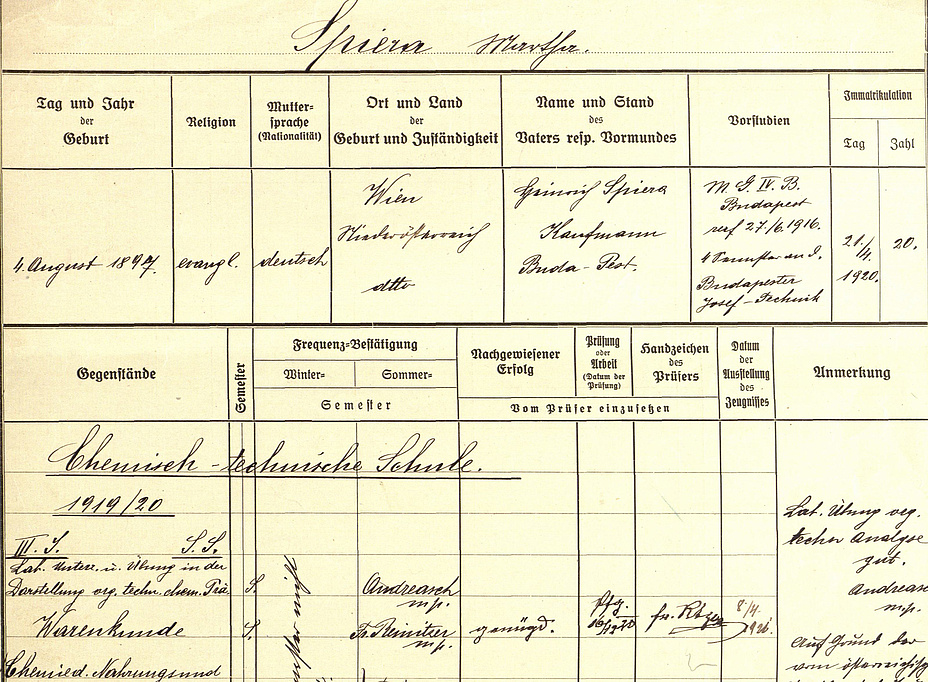 An extract from the register of Martha Spiera.

Her later journey through life is only known in fragmentary form. From 1932 to 1936, Spiera worked as a chemist at the Institute of Dermatology of the Péter-Pázmány University of Budapest (today known as Semmelweis University, Budapest), and together with Joszéf Erdös, wrote a standard work in clinical chemistry in Hungarian, which was published in Budapest in 1939. After this, all traces of her vanish.

More than 20 years after Spiera had been the first woman to complete her studies, the time was ripe for the first woman lecturer in the 1945/46 academic year at IT Graz. Her name was Lorle Herdey, and she was born Eleonore von Savageri, the daughter of Dr. Bruno von Savageri, a man of private means, on 28th October 1923 in Graz, and found her calling in architecture. She completed her studies at the local Institute of Technology on 15 April 1945. Earlier, in 1944, she had been deployed as a scientific assistant. She was one of a number of women who after 1942, due to the war, found access to academic life at the Institute of Technology of Graz as research assistants or wartime representatives of enlisted assistants.

During the Second World War, the proportion of women among students at IT Graz increased substantially. Many women fled the bombing in Germany to come to Austria. Between 1941 and 1944, many more German women students than usual came to the Institute of Technology at Graz.

In 1945, Lorle Herdey was the first woman to be appointed to the position of assistant in her own right at ‘her’ Institute of Technology. She was an assistant to the legendary Fritz Zotter at the Institute of Architecture and Design. It must have been an eventful time in the life of the young architect because in the 1945/1946 winter semester she became the first woman to secure a teaching position. She taught architectural drafting and sketching. And on 20th April 1946 she married Wilhelm Andreas Herdey. With him she built up an architectural office and they soon started business. In addition, during the Rectorship of Zotter in 1948/49, she took over a large part of his teaching duties and also the administration of the professorial chair. All this led to the fact that Lorle, who now bore the name Herdey, was not able to complete her doctoral thesis in time, and could not be employed as a senior lecturer in 1952 as planned. She was thus effectively barred from continuing her university career – but not her career in architecture. Together with her husband, she designed industrial, residential and cultural buildings as well as hospitals in the whole of Austria and abroad over the next decades. Among other things, the two together in cooperation with Karl Raimund Lorenz realised new structures for the Institute of Technology, such as the hydraulic engineering laboratory and buildings for the University of Graz. After an eventful life and at the age of 85, Lorle Herdey died in 2008. 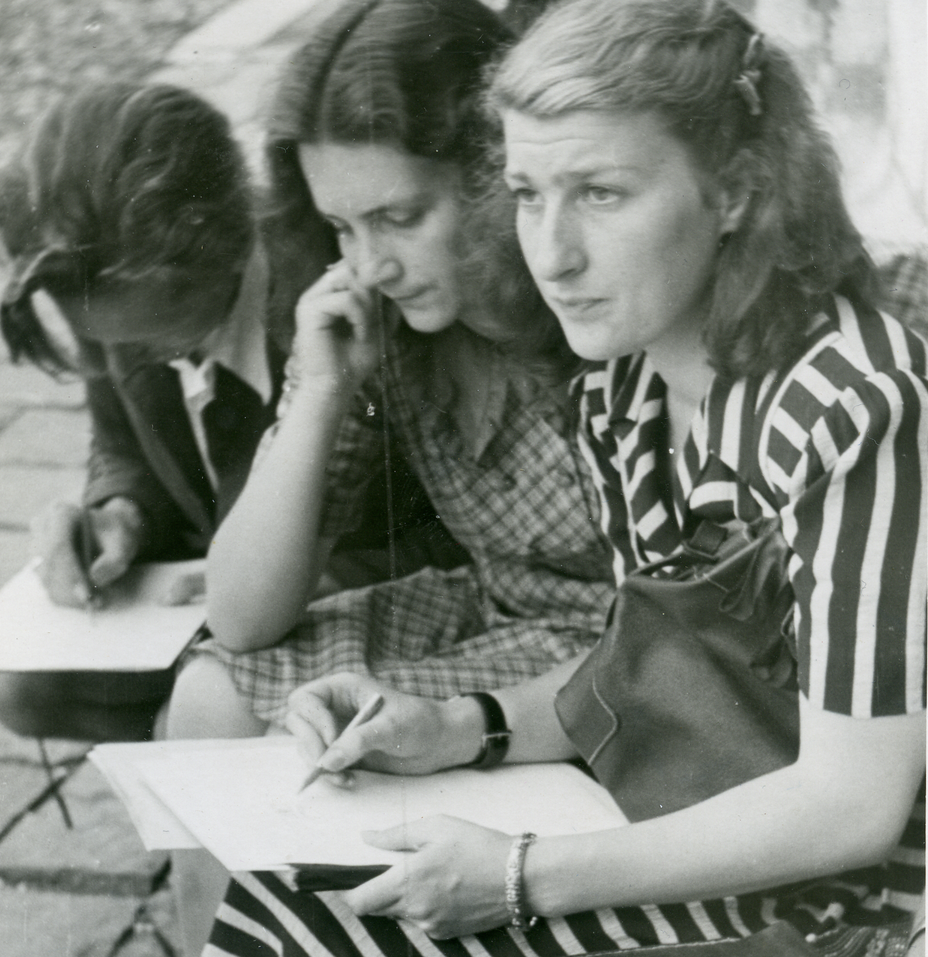 Even if there were 46 years between the first woman obtaining a teaching position and the first regular professorship being awarded to a woman – architect Karin Wilhelm in 1991 – IT Graz nevertheless produced a woman professor. She was born Swetlana Redtko-Redtschenko in Luzk in today’s Ukraine on 14th August 1919. After dramatic early years, she then studied mechanical engineering at the University of Zagreb. After the Second World War, she pursued her studies at the Institute of Technology of Graz in the 1945/46 winter semester. In 1947, she took the second state examination in mechanical engineering. This makes her the first woman to successfully be awarded the title of a graduate engineer at today’s TU Graz. She married in the same year, taking on the name of Winnikow.
Like many other young people in Austria, she emigrated due to the economic crisis in the early 1950s. She went to Australia and worked in the Department of Works, which was set up in 1952. She worked on developing diesel engines there and monitored and checked new laboratory and testing facilities.
In 1960, Svetlana Winnikow moved to America. She taught at the University of Illinois, where she additionally gained a doctorate in engineering in 1965, and at the University of Calgary in the Canadian province of Alberta. In 1967, she moved to the Department of Mechanical Engineering at Michigan Technological University in Houghton. There, she was appointed the first woman professor of engineering sciences in the same year. Winnikow was highly valued equally by colleagues and students alike. She developed active research and publishing activities in Houghton and remained professor until 1981. She was regarded as a devoted professor by her students. She created optimum conditions in teaching in order to communicate fluid mechanics and thermodynamics in a clear way.
Winnikow died unexpectedly in 1981 after a short illness. Her legacy went into a foundation scholarship intended to facilitate the study of thermodynamics and fluid mechanics for a doctoral student. This scholarship is still awarded today and recalls the first woman graduate of the Institute of Technology of Graz who became a professor – though not in Austria.

If you would like to use TU Graz Archive for research, please look at the Archive website.