After months of rebuilding, the canteen in Inffeldgasse is now again open for business – with a radiant, brand new look and a completely newly designed culinary recipe. We tried out a test meal. 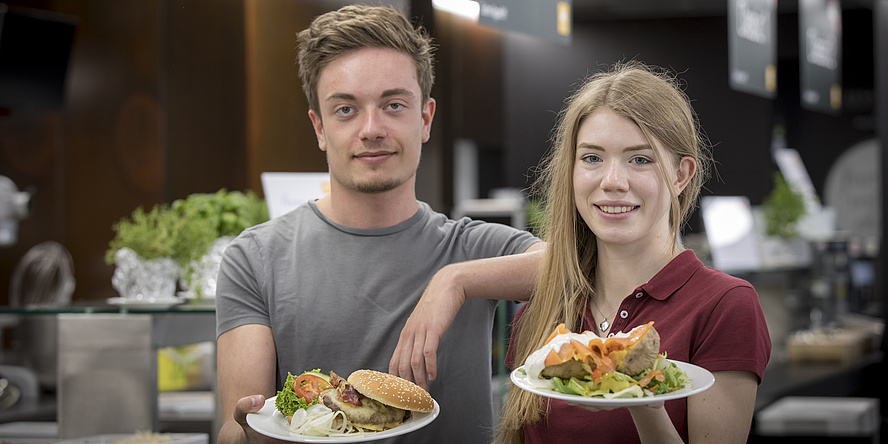 The new concept of the canteen is well accepted: Especially the burger and hot potatoes are very much liked.
The cutlery and plates are clattering again, and vegetables once more sizzle on the open hotplates, and the spicy smell of the dish of the day hangs in the air –  after months of rebuilding, the Inffeldgasse canteen is once again in full swing. And it’s completely different to how it was before. “Our new concept thrives on openness and freshness,” explains Albert Jokesch, the Styrian head of the Austrian Canteens company (Österreichische Mensen Betriebsgesellschaft GmbH). Each and every ordered dish is freshly prepared with regional products on the open hotplate in front of the customer. 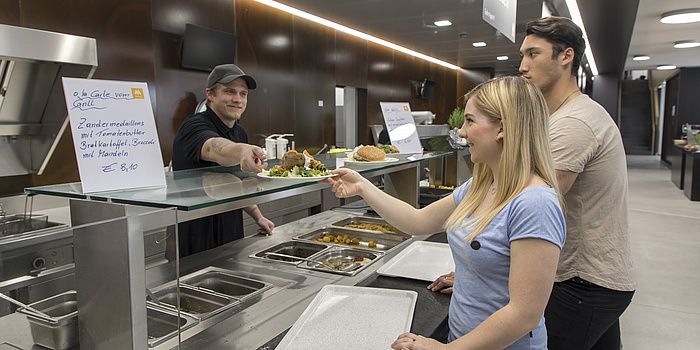 Each meal is cooked freshly in front of the customer.
“You won’t find any ready-made products here,” explains Jokesch. 500 to 600 meals are cooked and served in this way each day – our self-imposed target is 700. “The burgers are especially popular here in Inffeldgasse,” summarises the manager about the first week of operation. There are places for 160 guests in the generous, open-plan interior of the canteen, and for another 20 in the neighbouring café, and on the terrace designed in light wood another 30 persons. Two VIP rooms are accommodated in a gallery accessed via the canteen on the top floor, and can be hired for events – also with service on request. 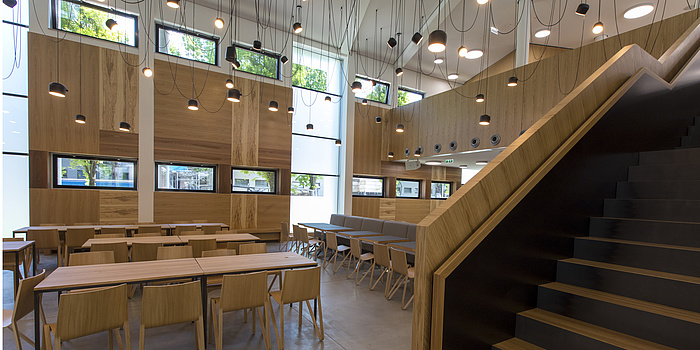 160 guests can be hosted inside the canteen. Aditionally there are two VIP rooms in a gallery.

Like the rooftop canteen in Stremayrgasse, the set-meal design has been changed over to a “free-flow system”. Novelties on the menu include savoury burgers with crispy French fries, which on request can also be individually made, and tasty jacket potatoes, which have met with great popularity at Campus Neue Technik on the rooftop canteen. Additional dishes from the wok, traditional cuisine, from the veggie corner, from the grill, from the pasta pan and for people with a sweet tooth change every day.There are no set midday meals but there are soups, salads and desserts at a discount which can be combined with the dish of the day as the fancy takes you. “In this way everyone can put together their midday meal as they want,” explains Jokesch. This system has been very well received – “except that at the beginning there was some resistance to salads being charged by weight,” the operator grins. 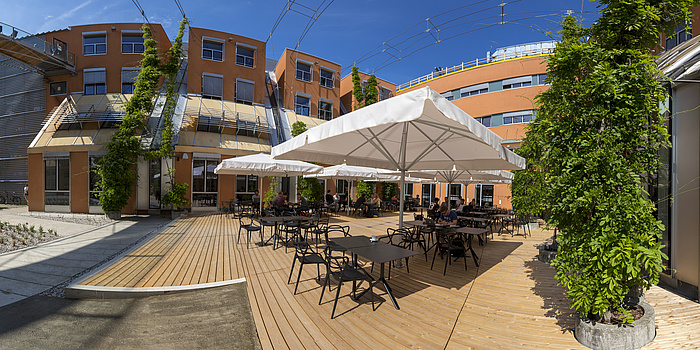 The new terrace invides to stay.
Albert Jokesch has been working in the canteen business for about one year, is a trained cook/ head chef and can look back on many years in catering and gastronomy. But, “I’ve never had such pleasant, nice and easygoing guests like those at the universities,” says the boss of five Styrian university restaurants (two of which are at TU Graz).
Opening hours and midday offers are to be found on the mensen.at-Website. More information about catering, hiring rooms and special events is available by email from albert.jokesch@mensen.at or on +43 5 7405 802 and +43 316 873 4716.