“I just loved knowing what things are made of.”

This sentence comes from TU Graz researcher Ricardo Buzolin. The 30-year-old is actually a mechanical engineer, but switched to materials science because “every machine is made of materials”. 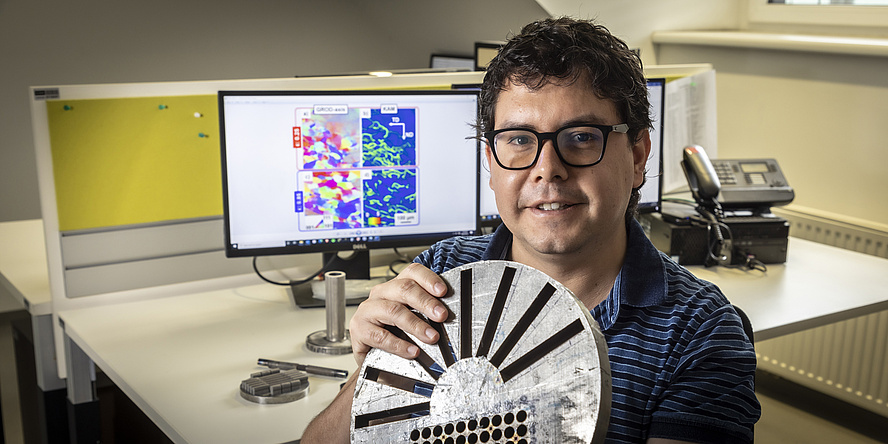 “My father used to have a motorbike,” Ricardo Buzolin says, only to correct himself with a laugh: “Or rather, he once had a motorbike.” Because Ricardo Buzolin loved to take things apart as a young man in order to know, how they were made. But, in the case of the motorbike, he even had permission to do so. “My father had this old motorbike. It no longer worked. Instead of throwing it away, he used it to entertain his son for several months,” he says with a broad smile. “We took the bike apart together piece by piece and looked at everything. I loved that.”

My father used to have a motorbike...

From engineering to materials science

Thus began Ricardo Buzolin’s love of machines, which led him first to study engineering at the University of St. Paulo in Brazil and later to materials science. “My view at the time was that engineering is the basis of everything and all possibilities come from it.” He became interested in materials while still in his first year at university, because: “I used to look at everything on a very large scale as an engineer, but to develop a machine I found it extremely important to look at materials at the atomic level as well.” He eventually found his way to Geestacht in Germany via his degree supervisor, where he first completed his Master’s degree in 2016 and then worked as a researcher. For his doctoral studies, he came to TU Graz – to the CD Laboratory for Design of High Performance Alloys via Thermomechanical Treatments under Cecilia Poletti, where he now works as a post-doctoral researcher.

Ricardo Buzolin has received the DGM Prize for Young Talent of the German Materials Society for his work.

Models describe what happens in the material

His research interests include metallurgy and lightweight materials. He studies materials such as titanium, aluminium and nickel alloys. “I investigate what happens in the material when it is processed, when it is shaped.” The young researcher develops models that describe the materials down to the smallest detail aming that they can be used in industry to design and improve processes. “The goal is to optimize the material properties as much as possible and predict how the material will behave under the specific process and service conditions.”

Ab big focus of his research today is on titanium allys, with applications in the aerospace industry – a big difference, for example, from applications in the automotive industry, in which Buzolinis also involved in in other projects. “The big difference is time for implementation of any change. The automative Industry wishes to improve the material and their process as quickly as possible. They normally have to come to market with their innovations in a scale of months.” The aerospace industry, on the other hand, plans in terms of years. They need to get the maximum out of the materials under the highest safety requirements. Time is a smaller factor here.”

Driven by curiosity and sustainability

His own motivation for the work is the same as it was when he dismantled the motorbike with his father: curiosity. “I want to constantly learn new topics and try to advance on fields that people have been thinking about for the past two centuries. The questions we work on at the Institute have been relevant since the first industrial revolution.” But there is another issue that drives the Brazilian: sustainability. “I see our work as an engine for digitalization. Good, simple and robust models are needed to digitalize production processes. With digitalized work flows, we can save resources and thus protect the environment. Of course, it is only a small drop in the ocean, but many drops together make an ocean.”