Graz Center of Physics: A decision has been made in the architectural competition

The University of Graz, TU Graz, BIG and Ministry of Science present the winning project of the architectural competition – This is what the new Graz Center of Physics will look like 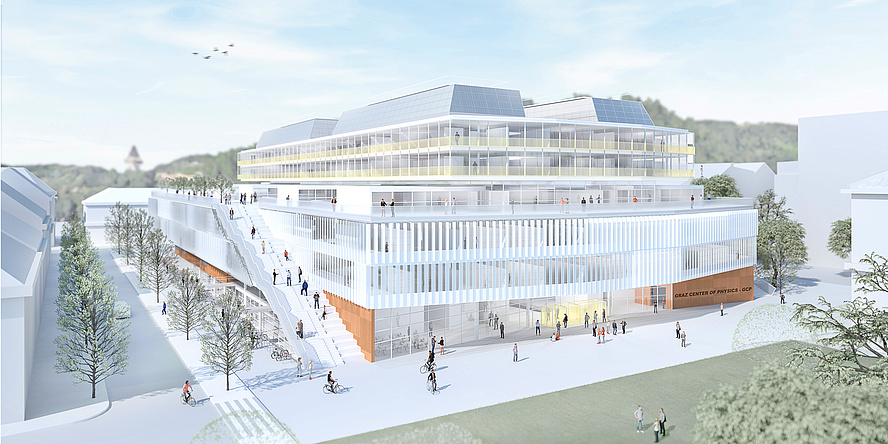 An exterior view of the Graz Center of Physics. The design is organised on six upper floors and two basement floors. Two highlights: the city terrace, which can also be reached via external stairs, and five wood-clad lecture halls on the ground floor. © Aberjung GmbH

The starting signal for the large-scale construction project was given in spring 2021. Following the conclusion of the EU-wide architectural competition, the Ministry of Science, the Bundesimmobiliengesellschaft (BIG), the State of Styria, the City of Graz and the two universities now present the winning project

Decision in favour of architects fasch&fuchs.architekten

The competition called for inspiring and inviting architecture for teaching and research as well as urban integration into the surroundings. At the same time, a substantial total area of 50,000 square metres was to be organized for up to 1,700 students and 600 employees of the University of Graz and TU Graz on a footprint as small as possible in the densely built-up inner-city district of Geidorf in Graz. These requirements were met by architects fasch & fuchs.architekten with their design for a compact and well-structured new building.

Plenty of space for research, lecture halls with wood and a city terrace

The design is compactly organized on six upper floors and two basement floors. The ground floor zone is accessible to the public and has a generous room height of 5.6 metres. Five wood-clad lecture halls, the largest for 600 people, are housed here. The impressive assembly hall, characteristic of the fasch & fuchs signature, extends over several floors. Imposing staircases and connecting bridges turn the foyer into a veritable spatial experience.

Above the ground floor is a two-storey homogeneous structure with laboratory space and the associated offices. This is organized around atriums, and vertical louvres on the façades direct the natural light far into the interior of the building and at the same time protect it from sunlight.

Above this is the floor with the so-called city terrace. This is also accessible from the outside via two generous outdoor staircases. A café will be set up here, and there will be seminar and study areas. The city terrace connects the university building with the city and at the same time forms a caesura to the uppermost structure, which recedes and thus puts the extensive volume of the building into perspective. There are offices here on three levels. They are connected vertically with the laboratory areas in the basement via stairs and lifts. The laboratories located there are intended for research work with highly sensitive research equipment. These include optics laboratories, where no natural light is allowed to penetrate, and electron microscopy, which cannot tolerate any vibration.

Special hollow-core ceilings are used in the construction, which use less concrete than conventional reinforced concrete ceilings and can also be used for heating and cooling via thermal component activation. Geothermal energy is used to generate energy. In winter, heat is extracted from the ground for heating, and at the same time it is cooled. The stored cold can in turn be used for cooling in summer. Electricity is generated by photovoltaics; roofs will be intensively greened. Overheating in summer is counteracted by light-directing horizontal louvres. Throughout the building there are atriums and light wells that allow daylight to penetrate down to the basement levels.

The planning phase will begin in the next few months. The Graz Center of Physics will be built on the site of the current preclinical building (Harrachgasse 21, 8010 Graz), which will be demolished for the construction project. The demolition will take place after the Institute of Anatomy of the Medical University of Graz has moved out, is scheduled to start in autumn 2023 and will take around six months. Construction is scheduled to begin in autumn 2024. In 2030, the handover to the two universities is planned.

The existing preclinical building from 1976 could not have been adapted for the complex requirements of the Graz Center of Physics. The neighbouring residents will be kept informed about the planning and construction work. An initial information event is planned for next year.

BIG is investing 313 million euros in the new building, which will be refinanced by the Ministry of Science through rents. In addition, 41 million euros will be spent on furnishings and equipment, half of which will be paid by the two universities and the other half by the federal government.

Comments on the winning design for the Graz Center of Physics

„By bringing the physics institutes of TU Graz and the University of Graz together under one physical roof, the exchange of knowledge and information and thus the cooperation in teaching and research between the experts of both universities will reach a new level. I am very happy for all the staff, as well as for all the students from the field of physics, that this common roof is part of such a successful architectural design. The Graz Center of Physics will be a striking eye-catcher and attractive fixture in Graz’s university quarter and will make physics in Graz even more prominent and internationally visible.“ Harald Kainz, Rector of TU Graz

“In the NAWI Graz teaching and research cooperation, the University of Graz and TU Graz have been working together successfully in the field of natural sciences for almost two decades. The fact that it is now also possible to spatially combine the physics institutes of both universities in one building and thus bundle research and teaching at one location is an additional plus. The new centre will help us to bring even more top international research to Graz. In addition to the sustainable and modern construction, I expect a visual gain for the campus of the University of Graz. The Graz Center of Physics will integrate seamlessly into the existing building infrastructure and enhance the whole neighbourhood in terms of urban development.” Martin Polaschek, Rector of the University of Graz

“The Center of Physics in Graz will be a new, modern and sustainable university building. I am particularly pleased that this building project will give the outstanding scientific achievements of the University of Graz and TU Graz more visibility, also beyond the country’s borders. I look forward to the realization of this ambitious building project by 2030.” Heinz Faßmann, Federal Minister of Education, Science and Research

“With the Graz Center of Physics, a university flagship of the natural sciences is being created in Styria. This will enable the University of Graz and TU Graz to make even better use of synergies in the future. As the number one research state, Styria is once again in the spotlight with the state-of-the-art centre and underlines the outstanding quality of our university location. I am extremely pleased that the decision of the architectural competition will create the best conditions for students as well as staff, research and teaching.” Hermann Schützenhöfer, Governor of Styria

“I am delighted that this exciting project is now entering the implementation phase. The urban planning challenge of integrating modern architecture into a Gründerzeit quarter has been successfully met here. The planned ‘city terrace’ will open up the project to the city, which is particularly important to me. Graz as a university location will be further enhanced.” Judith Schwentner, Vice-Mayor of the City of Graz

“The Graz Center of Physics is currently one of the largest university construction projects in Austria. The design by fasch&fuchs.architekten envisages a climate-friendly building that blends in well with its surroundings despite its size. Of particular architectural interest are the two open staircases leading to a large city terrace and the six-storey high assembly hall with connecting bridges. The new building will be realized according to BIG’s particularly high sustainability standards. With the construction of the Graz Center of Physics, BIG is creating the framework conditions for top-level scientific research and teaching. For Styria, it is another building block that makes the federal state attractive as a high-tech and research location.” Hans-Peter Weiss, CEO of BIG 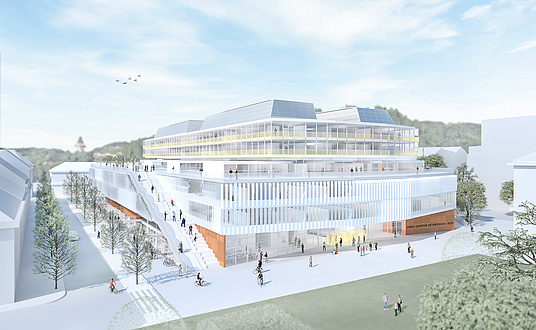 An exterior view of the Graz Center of Physics. The design is organised on six upper floors and two basement floors. Two highlights: the city terrace, which can also be reached via external stairs, and five wood-clad lecture halls on the ground floor. © Aberjung GmbH 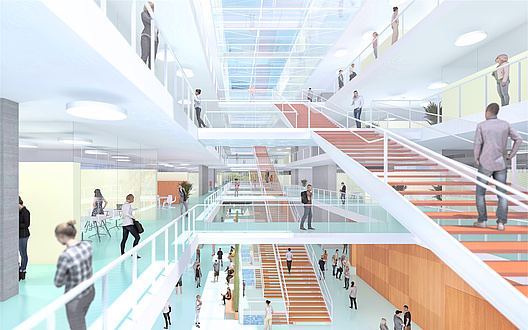 Interior view of the Graz Center of Physics: Several staircases and lifts connect the laboratories in the basement with the office areas in the upper building. © Aberjung GmbH