Research and Teaching for Equal Opportunities

What emotions women’s football arouses, how multimedia recommendation systems neglect the unpopular, and how artificial intelligence could be widely communicated – these topics and more are the projects that TU Graz recently awarded Mind_the Gap prizes to. 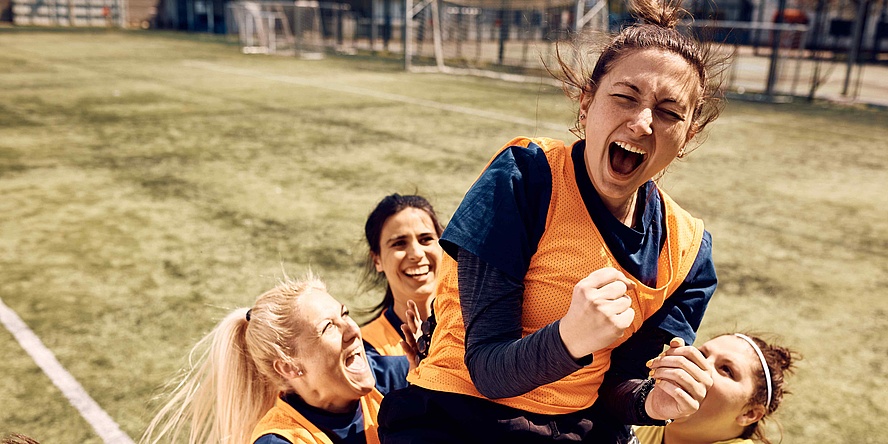 When human beings in all their diversity in technology and the natural sciences take centre stage, exciting questions arise and from them equally exciting ideas and projects. This is once again impressively demonstrated by the total of five publications and projects from research and teaching that were recently awarded the “Mind_the Gap” prizes of TU Graz. They all include different aspects of diversity such as age, gender, origin, language or culture.

The diversity prizes are endowed with 750 euros for submissions by individuals and with a maximum of 1,500 euros for team submissions, depending on the number of persons. As every year, the variety of publications and projects submitted is fascinating.

Each year, teams or individuals are awarded a “Mind_the Gap” prize for their work in the categories “Academic theses”, “Research project”, “Conference contribution, lecture or publication” and “Doctoral theses”. Teaching content or methods, further training and non-scientific projects are also accepted. Details on this – and shortly on this year’s award-winning projects – can be found on the “Mind_the Gap” website.

Jana Lasser and Max Pellert analysed 2.8 million tweets from the 2021 Men’s European Championship and the 2022 Women’s European Championship to find out what emotions they aroused in fans. In their research project – which, by the way, did not require any project funding – the emotions expressed by German-, English- and Spanish-speaking women and men were automatically rated. For this purpose, Lasser and Pellert, both employees at the Institute of Interactive Systems and Data Science at Graz University of Technology (TU Graz), developed novel tools based on machine learning and artificial intelligence. They made these tools available to science and the general public in the spirit of open science. One of the project results shows that German-speaking tweeters are more likely to express annoyance than joy, regardless of gender.

Emanuel Lacic and Dominik Kowald illustrate in their scientific publication that artificial intelligence-based multimedia recommendation systems such as Spotify or Netflix over-represent popular content. More clicks lead to more recommendations, resulting in popularity bias. This so-called “popularity bias” disadvantages people with inclinations towards less popular content. Due to a lack of diversity in the training data, people who listen to music outside the mainstream, for example, receive fewer suitable suggestions. Lacic and Kowald are employees of the Institute of Interactive Systems and Data Science at TU Graz and the Know Center.

In the project ENARIS – Education and Awareness for Intelligent Systems, a team at the Institute of Software Technology developed workshop formats and teaching content that convey a basic understanding of artificial intelligence (AI) in a low-threshold manner. The materials are designed for school lessons or mini-workshops at community level. The teaching examples raise ethical issues and highlight algorithmic and social biases that arise from the use of AI and can lead to discrimination such as sexism, racism or classism. All materials are designed to be diversity-sensitive and gender-inclusive. With ENARIS, Gerald Steinbauer-Wagner, Bettina Jeram, Manuel Menzinger and Petra Weixelbraun want to empower broad sections of the population to participate in an informed social discussion of the technology that increasingly determines our lives.

Basics of electronics gender-appropriate and multilingual

A team at the Institute of Electronics (IFE) at TU Graz designed the interactive online course ElectrONIX – Amplifiers to teach the basics of electronics to students, upper school students or people in further education. In view of the shortage of skilled workers in the industry, Nikolaus Czepl, Sabrina Koffler, Michael Fuchs, Clara Scheiber and Dominik Zupan want to deliberately address a broad audience. Several IFE staff members present the teaching content in videos, with women just as naturally and strongly represented as men. The course has already been accessed by women measurably more highly – women have been strongly under-represented in electrical engineering studies up to now. ElectrONIX – Amplifiers is offered in English, German and BCS (Bosnian, Croatian, Serbian) to break down language barriers. The course is accessible to the general public as a Massive Open Online Course (Mooc) on the iMoox platform.

Men as supporters of women in STEM subjects

At the core time of the RADEC specialist conference in the field of radiation, which is aimed at professionals in electrical engineering and physics, Alicja Michalowska-Forsyth organized a lecture and discussion panel with three renowned former women researchers. All three are now in leadership positions in industry and at UN level. The focus of the RADECS Women in Engineering Event was how to get more women interested in subjects in the fields of mathematics, computer science, natural sciences and technology and what structural changes would be necessary to achieve this. Michalowska-Forsyth – a graduate of the pilot course on gender and diversity competences for scientists at TU Graz and a staff member at the Institute of Electronics – also targeted men as mentors and supporters with the event. The panel was therefore aimed at both men and women. Participation was very high with 70 participants, about 85 per cent of them men. The following online survey showed a great interest in knowledge building on gender and diversity competences and on compatibility issues in the context of future RADEC meetings.

TU Graz actively supports a culture of diversity and appreciation. On the TU Graz website you can find more information about diversity at TU Graz.