How do you build robot systems which can explore the environment autonomously? The field robotics team TEDUSAR deals with this question and many others. 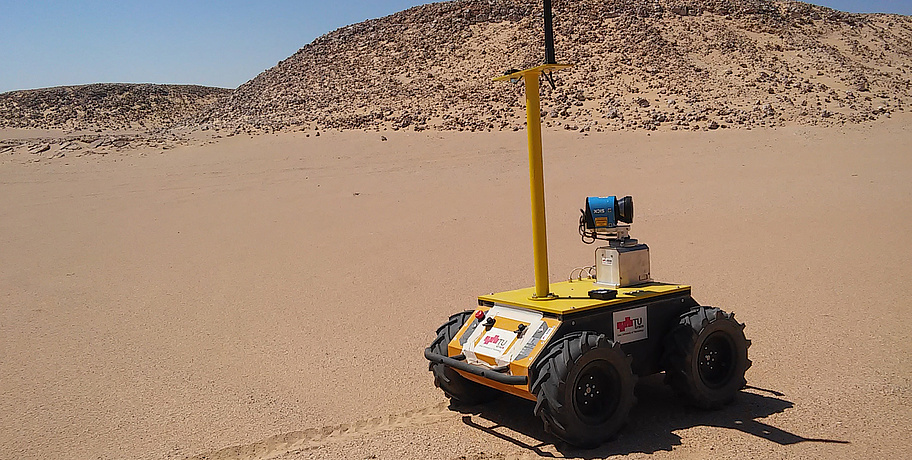 The ‘Husky’ robot carrying out the autonomous exploration of an area in the desert during the AMADEE-18 Mars simulation.
We the Field Robotics Team TEDUSAR (Technology and EDucation for Urban Search And Rescue robots) of TU Graz, are students who share a fascination: robots. More precisely – autonomous robots which can perform certain tasks independently without outside help. It all began with the development of robotic systems which could be deployed to support emergency services in disaster operations. We encountered a number of challenges, such as the unstructured – in other words, natural – surroundings, each with their obstacles, the automatic creation of maps of the environment and the autonomous gathering of information. For example, the team has successfully participated in several competitions in the RoboCup Rescue League, which deals with searching for casualties in a disaster scenario. We later deepened our knowledge of the field of navigation and, in collaboration with Post AG and I-TEC Styria, developed a robot which can deliver packages autonomously in the inner city of Graz. Recently, we also developed a robot system with which we participated in the AMADEE-18 Mars simulation of the Austrian Space Forum (ÖWF) in the desert of Oman.

Video: Visiting the Robotic-Lab of the Field Robotics Team TEDUSAR.

I became interested in robotics very early on and built simple robots with the help of the Lego Mindstorms building system. Later on in my studies, I then specialised in the field of autonomous robots and became a member of the TEDUSAR team. My task was to develop a robot system for both 3D map creation and 3D navigation and exploration. This system was first tested in a simulation environment and after this implemented on the robot platform ‘Husky’. We subsequently took part in the AMADEE-18 Mars simulation in the desert of Oman. The objective was to make available to specially trained space-suit testers, so-called analog astronauts, a robot which was able to explore the environment around the base camp autonomously and to create a 3D map of it. This 3D map also had to additionally take into account the field strength of the WLAN Communication network of the analog astronauts in order to support the mission planning with additional data. 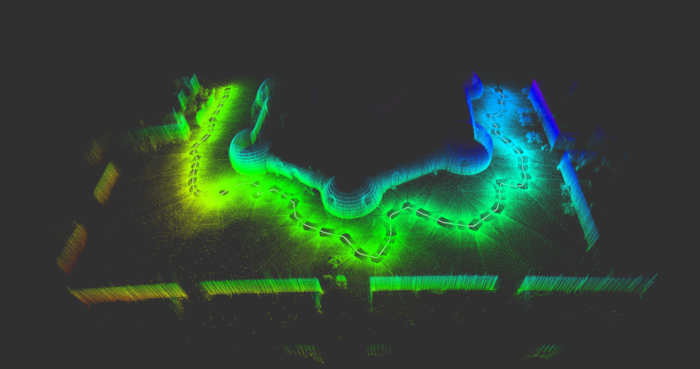 Visualisation of a created 3D map of the base camp during the AMADEE-18 Mission.
We had tested our robot system in simulations and ‘in the real world’ in Graz and Innsbruck. However, a desert environment has its own special challenges, which we had to master. Luckily, there was the so-called preparation and bridgehead phase. This entailed flying to Oman to make the final adjustments to the software system and also the hardware around the base camp and in the desert. Following that, we handed over our Husky to the field crew and the analog astronauts, and flew back to Graz before the isolation phase and the Mars missions began. This project was for me the best possible opportunity to implement and expand my knowledge about robotics in practice. In addition to the original challenges such as the 3D navigation, it was also necessary to solve many other problems, for example desert compatibility. One special highlight – quite apart from the 10-day stay in a camp in the middle of the desert – was the talks I had with the space experts of the field crew from which I was able to learn a great deal about space technology.

Who can join in?

Anyone who is interested in robots and always wanted to know how they are developed, built and programmed is very welcome. You could gather a lot of practical experience with us to supplement your university education. Whether taking responsibility for your own software packages or developing special algorithms or concepts, here you’ll have the opportunity to implement your theoretical knowledge in practice and to specialise in the area of intelligent autonomous robots. Of course it’s not all about dealing with problems in your own specialist area, but also about exchanging information with team members of other disciplines. After all, mechanics, electronics, software and artificial intelligence all go to form a functioning robot. Just send us an email or pop round to the robotics lab and take a look at everything there.
If you would like to meet TU Graz´s student teams face to face you will be able to do so on June 16th: The students are presenting their work at "TU Graz StreeTech" at Hauptplatz Graz. Come, join and get informt! For more information visit the events website ‘TU Graz StreeTech’.
Field Robotics Team TEDUSAR
Inffeldgasse 10 (2nd floor)
8010 Graz, Austria
team@tedusar.at
robocup.tugraz.at