…the courage for basic research

Reflections from Hans Sünkel, former Rector of TU Graz and chairman of the supervisory board of the Austrian Science Fund, on science and research.

Armed conflicts, streams of refugees, financial crisis and such like – in view of these worrying developments should we, may we, think aloud at all about topics such as the future of science or should we instead be putting all our energy into solving the problems of the present? We may and should do the one, but not ignore the second. 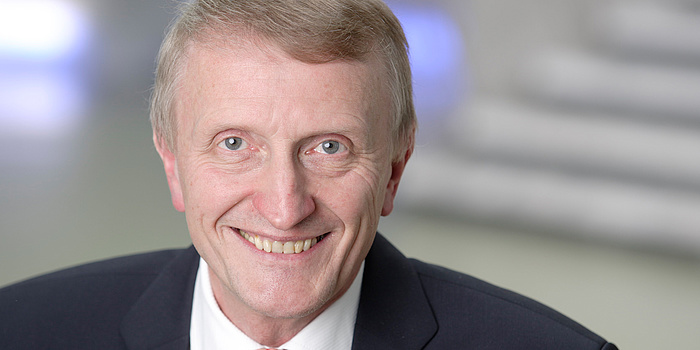 From 2003 to 2011, the geodesist Hans Sünkel was the Rector of TU Graz.
As a true Styrian, one should remember Archduke Johann not only gladly and with respect, but also gratefully. Because he recognised very early on that the best investment in the future of a society is the education of its young people. And he also recognised that progress with sustainable impact needs research. He gave our state of Styria a future and taught us to be proud of it. He helped Styria achieve a remarkable economic upturn and yet stay down to earth – thus foreseeing Theodore Roosevelt’s recommendation: “Keep your eyes on the stars and your feet on the ground.”

Value-free education and non-purpose-oriented basic research also need budgetary courage, particularly as economic success stories often require time. Just as any expedition means basic research, reconnaissance of new territory is bound up with risk. If you take risks, you can lose; if you don’t take any risks at all, you’ve already lost. Economic thought patterns along with risk minimalisation are thus out of place in the case of basic research, as is also the often heard call for "return on investment".
Placing basic research on the sideline means, accordingly, relinquishing culture
To equate value-free with valueless education and non-purpose-oriented with purposeless basic research is a serious mistake which a nation of culture should not make, even when an all too narrow budgetary corset may lead to such an interpretative simplification. Basic research, or fundamental research, is intimately linked with our civilisation and is thus one of the important pillars of our culture. Placing basic research on the sideline means, accordingly, relinquishing culture. “Basic research – what for?” can be equated with “culture – what for?” – and is the result of an improperly posed question.

It is well known that money isn’t everything, but without money everything is nothing. And that’s exactly what the budget of each and every institution is: the programme illustrated in figures. The “research” programme has taken a remarkable turn in Styria since the millennium year and has led to a European catch-up process which has placed us in the position of an innovation follower. Until the financial crisis of 2008, we were well on the way to achieving the European Commission’s declared target of spending 3% of GNP on research by 2010.

In the following stagnation phase, the Chairman of the Austrian Science Board, Prof. Jürgen Mittelstraß, expressed true sentiments when he said during one of the talks of the Alpbach Technology Forum:
“When times become worse and resources scarcer, living creatures react quite naturally by reducing almost all their bodily functions. But one function is always maintained intact – namely, providing the brain with blood and thus oxygen. And this must also apply to the research and education of a country.”

Economic recovery has started again but in a lower gear, and there has been an upward trend for a few years such that in the meantime the above-mentioned EC’s target has been achieved. Our country has set itself a target of investing 1% more in research by 2020 relative to the level of 2008, which has led to the target of 3.76%. This is quite a casual prediction and should now be rigorously pursued. Inspiration can once more be taken from Styria from the fact that the amount invested in research has now drastically increased to 4.6% of GDP throughout Austria and thus lies at the very top of all the European regions. It has to be hurriedly added that business and industry contribute some 70% to total research expenditure.
But if you invest too little in basic research, soon you won't have much to apply.
The Austrian research funding landscape enjoys a very strong financial budgeting as regards the field of applied research. In contrast, there is much room for improvement in funding basic research. Business successes from basic research, of course, take longer to percolate through and include an intrinsic element of calculated risk. But if you invest too little in basic research, soon you won’t have much to apply.

The Austrian Science Fund is known as the national financial instrument for basic research. It is committed to highest quality and thus also excellence. Over 4100 (mainly young) scientists are being currently funded in 2300 research projects by the Austrian Science Fund, and our universities are far the strongest beneficiaries. And project applications have shown an annual increase of some 8% over the last few years, which is an encouraging sign for the commitment of our scientists.

The Council for Research and Technology Development (RFTE) has long recognised the writing on the wall and estimated the increased budgetary demand of the Austrian Science Fund at some 100m euros per year. (In doing so, the view with respect to Germany, with the DFG, and Switzerland, with the SFN, is purposely cautious.) To go down this route consistently and to see the development of project applications as an orientation aid in terms of the medium-term budget development would be an expression of understanding on the part of federal government policy for a sustainable development of basic research in our country and should be possible despite other increased demands.

Furthermore, developing additional sources of money in a private way and operating a kind of money mining, as Secretary of State Harald Mahrer suggests, should be considered. This sounds tempting but is still at the moment a dream of the future; particularly as this would mean new territory for the Austrian Science Fund with no experience to fall back on to be used in the budgeting. With the imminent election of the presidium of the Austrian Science Fund, the staff reorganisation will also be complete. And so after September of this year, the Austrian Science Fund will be able to deal with building its future with a new energy by means of a constructive interaction between presidium, supervisory board and assembly of delegates as well as a Federal Ministry of Science, Research and Economy which not only has links to the Austrian Science Fund but also much understanding.
We just have to wish for and articulate them according to our manifest will, pursue them rigorously and cultivate an upright attitude which is neither presumptuous nor submissive, but which is sustained by courage.
If a financial input for science and research is matched by a scientific output on equal terms, then we are finally on course for success and will have finally arrived on the world stage as an attractive science location. A science location that doesn’t develop misguided ambition to be excellent in every field (because no location can fulfil this aspiration, much less a small country like Austria). But a science location that is actually world class in some fields, and which at the same time, can offer a very good overall platform for education and research. A science location which, moreover, possesses a number of attributes which are attractive for excellent scientists and innovative industries alike.

We just have to wish for and articulate them according to our manifest will, pursue them rigorously and cultivate an upright attitude which is neither presumptuous nor submissive, but which is sustained by courage. And we should all take this courage in our own hands – for the good of Styria, our society and our future.
Further Information on the Austrian science fund FWF
Hans SÜNKEL
Prof. Dr.
Institute of Geodesy
Steyrergasse 30, 8010 Graz
Phone: +43 316 873 6345
Fax: +43 316 873 6845
Email: hans.suenkel@tugraz.at