… my business trip into space

By Franz Viehböck and Susanne Eigner

Franz Viehböck, the first and only Austrian ever to have been in space reveals very personal memories of the Austromir mission in the TU Graz blog. 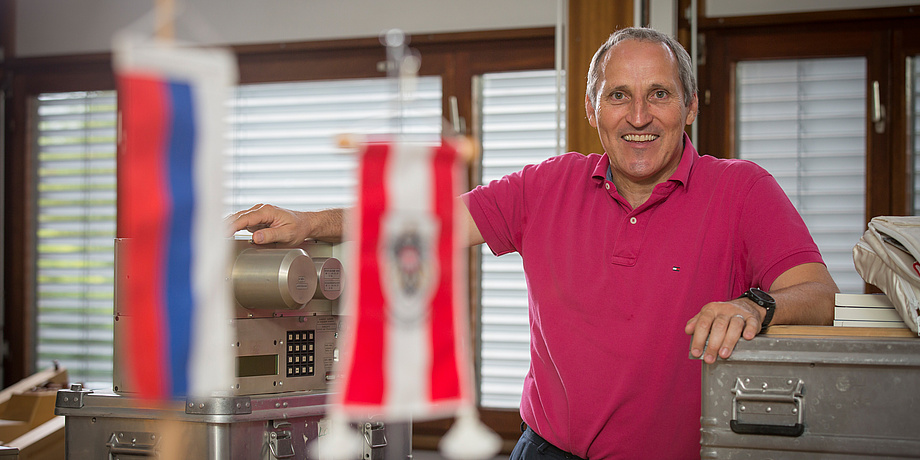 Franz Viehböck sleeps much better on Earth - and would still go back into space. © Lunghammer - TU Graz
Sometimes I still dream of space. It’s mostly when I’m reminded of the spaceflight, when I meet people from that time or see things which remind me of my stay in space station Mir. That was over 25 years ago and I still remember very well the hard preparation time for the Austromir mission.

The training is usually harder than the actual spaceflight, something which has a calming effect in the real situation. The biggest personal challenge for me was learning Russian. Just before the launch on 2nd October I was unsurprisingly very nervous and tense. But I no longer had any fear at this point. But four days before the launch I had a moment which was quite different. I knew that in a few days I would become a father, I was alone in a room and suddenly it became clear to me that if anything happened to me, I would miss out on the life of my daughter. I then consciously made sure I was among people again as soon as possible to dispel these thoughts.

As soon as you’re lying in the rocket, your anxiety disappears and is replaced by routine. Well-trained procedures and checklists are gone through. At the launch itself my pulse was a very calm 72. After the long journey to Mir, it was incredibly emotional to float into the space station and be greeted by my colleagues to the sound of the Blue Danube. I hadn’t noticed the cameras which recorded the pictures of my astonished face, which became well known in Austria. I just registered my colleagues who I had seen the last time six months before down on the Earth. And they in turn were very pleased with my Austrian presents, especially with the Mozart balls. How they taste in the weightless state, by the way, I don’t know. I didn’t eat any up there. The atmosphere on board was very pleasant. I think the whole crew was euphoric because my daughter, Carina, was born exactly on the day of the launch. The first photos of her I saw were sent directly to the space station. 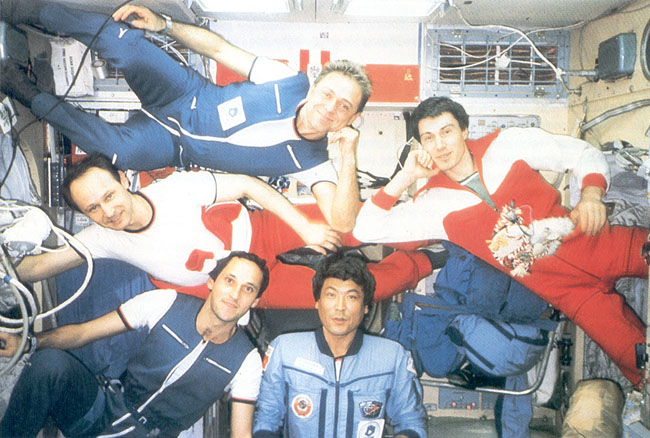 Franz Viehböck (bottom left) with the cosmonaut's crew in the Mir space station.
My eight-day stay in Mir worked perfectly, thanks to the intensive preparations. It was after all a work stay, a kind of business trip. And the programme was really tight, so tight I almost had to make an effort to enjoy my time in space. I was happy to sacrifice some sleep for a view out of the window. Although, sleeping in weightlessness is a strange thing. You don’t need a pillow, because your head doesn’t weigh anything. Unfortunately, due to the weightlessness certain muscle groups in the back get cramp. I sleep much better on Earth.

Also, my feelings for the Earth became very sensitive – my appreciation of the beauty of this planet and its fragile environment. I realised that we all have to make more efforts to protect the planet. On Mir I had the opportunity to speak to my wife live. She is a Croat, and as we were flying over Europe and I was telling her I could even see the bridge from the mainland to Krk island, she asked me if I could also see the bombs which at that moment were being dropped on Dubrovnik. This was during the Yugoslav war. I didn’t see any bombs, but I was deeply saddened. You look down below at this beautiful planet, you see magnificent landscape, lakes, seas, you don’t see any artificially created territorial borders, and you ask yourself: what are we humans actually doing with this planet?

If I could, I would definitely go back into space, and I would prepare myself differently on the basis of my experience of the first space flight. The rocket would be more or less the same, and I’d fly to the ISS, which in principle is like Mir, but bigger of course, more spacious and with more modern equipment. And I’d absolutely make sure that I could do a small space walk. 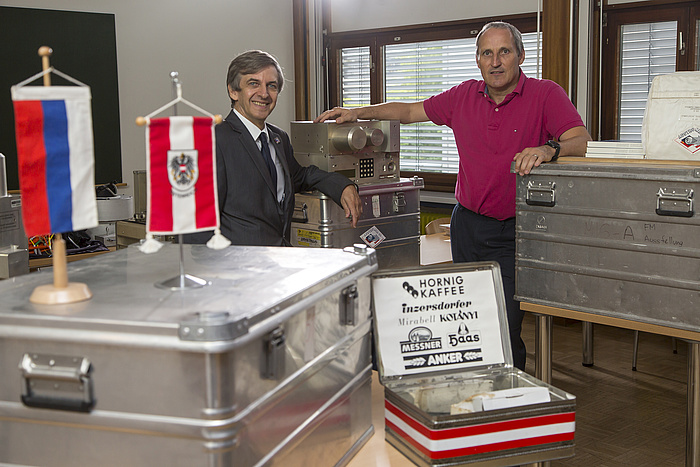