… Driving in a wooden box

Love of technical gadgets is almost part of the job at TU Graz. Not surprising that I had to shout “ME!” when test persons were being sought for the in-house driving simulator. 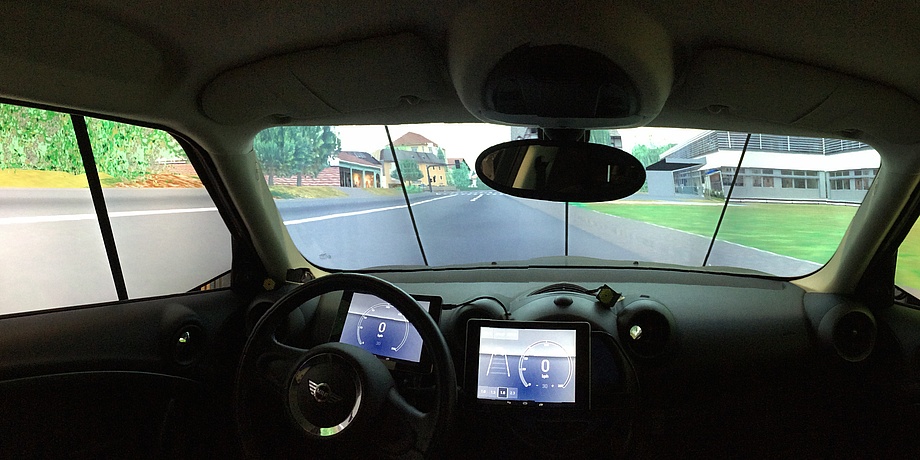 My "workspace" for about an hour - this is what the TU Graz driving simulator looks like from within.
“In reality I drive much better,” were my unbelievably contrite and apologetic words as I got used to the simulator driving seat at Inffeldgasse. I had lost my orientation, started off on the wrong side of the road, trembled discretely while staying in lane, and immediately exceeded the maximum speed limit. A brilliant start.

In reality I drive much better.

My real work place and desk is in Rechbauerstrasse 12 – at the Alte Technik. I’m responsible for the electronic newsletter and two magazines at the Communications and Marketing service facility. Today I had exchanged my desk for the cockpit of the TU Graz driving simulator, which provides valuable data for a wide range of different projects in various studies – including some large scale studies using many test persons – at the Inffeldgasse Campus.

Just drive through that concrete wall separating the lanes.

“Turn the vehicle round and drive on our actual test track,” instructed the experimenter, who had sat down in the passenger seat. “Just drive through that concrete wall separating the lanes.” What? Although nothing happens or can happen, it takes a lot of courage to drive straight at a concrete wall on a motorway – even if it is just simulated. And then, having got into the right lane, I get cut up by a (simulated) HGV, which just won’t let me into the traffic. After successfully navigating the test track without getting into an accident and to some extent getting used to the driving experience, I finally had time to take a closer look at my “workplace”.

The RENNT research project tests different signposting and guidance systems at toll stations. Various scenarios have to be mastered – guided by the experimenter. I’m sitting in a converted Mini Countryman which has lost its engine and only remotely resembles a classical road vehicle on the outside. The vehicle should have been scrapped but was given a second lease of life in a small, black wooden box in the workshop hall of the Inffeldgasse Campus. The research simulator was developed only a few years ago by TU Graz’s Institute of Automotive Engineering along with Fraunhofer Austria, AVL and SBW Technology as there was a sudden need for experiments under safe and identical conditions with a very large test person population in the former MueGen Driving Project. “Actually, a complete and ready-to-use simulator should have been purchased but that would’ve been too easy and wouldn’t have allowed us to install add-ons for additional projects,” explains Arno Eichberger, head of the Institute of Automotive Engineering and largely responsible for the conception and construction. 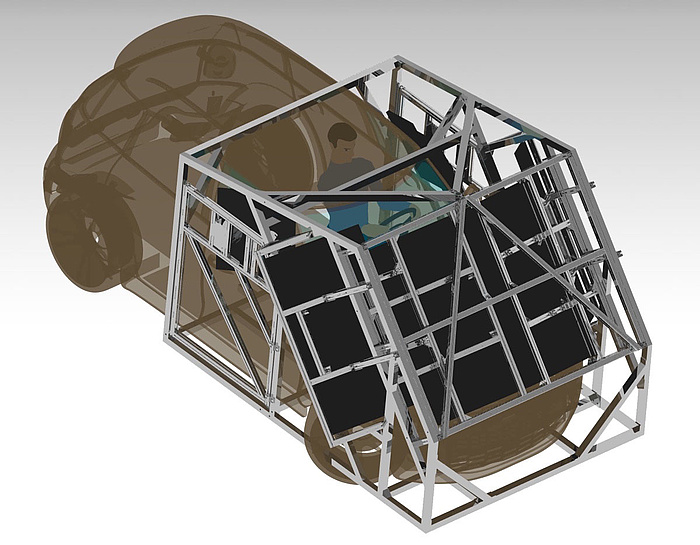 The driving simulator is a converted Mini Countryman surrounded by computer screens.
All around me are display screens – three on the windscreen, one on each of the side windows, and even one behind the rear window, in which I can see traffic. Yes, I wasn’t alone on the motorway – that would have been too easy. There were other cars and trucks driving with me, sometimes in front of me, sometimes next to me, sometimes behind me and sometimes even through me – even the best simulation can make mistakes. The traffic is produced realistically on the basis of measured traffic flows using a traffic flow simulation made by the Institute of Highway Engineering and Transport Planning. The background noise can really be mistaken for what you hear in a real vehicle – for a few minutes we tried it with the sound off. That was a really strange feeling and left me completely disoriented, especially with respect to driving speed. In real life or real traffic, I wouldn’t have noticed that the noise is not that of a Mini Countryman but rather an Audi A8. The steering wheel gives feedback and doesn’t just let me turn it but vibrates when I drive too far onto the side of the road.

Steer, indicate and belt up?

Before the experiment starts, the viewing cameras have to be calibrated – from this moment on, wherever I look will be constantly recorded. Just before getting in the car I was wired up so that my vital signs could be measured.  “Do I have to indicate, put it in gear and fasten my seat belt?” I ask, rather baffled. “Just do what feels natural for you. Some people like to, others don’t. But it’s not necessary for the experiment,” the experimenter explains.

Do I have to indicate, put it in gear and fasten my seat belt?

Before my experiment I had heard a lot about “simulator sickness”. That’s that worsening feeling in the pit of the stomach, when visual perceptions no longer synch with the movements felt by the body. “You can open the door at any time if you don’t feel well – but you have to push it hard because the display screen bracing and wooden door are attached to it,” says the experimenter. And in case of emergency, there is a big red button between us which can stop the simulation immediately. I imagine I’m sitting in a over-sized and perfectly made computer game – and everything will pass off without nausea.

The tasks in the simulator are interesting and I quickly get used to the driving style. I don’t allow myself to be hampered by the other road users and drive a bit more daringly than in real life. Luckily, an unmarked police car hasn’t been programmed into the simulation...  As I get out of the car a good hour later, I’ve been let out back into the real world onto my bicycle, happy and with a new experience. And in the knowledge that I’ve provided the RENNT research project with valuable results from the data recorded while I was driving.
The first project in which the driving simulator was substantially made use of at TU Graz was in the MueGen Driving Project, which investigated the degree of trust different people have in driver assistance systems. Click here for a Planet Research article about the project. Interested people are being constantly sought for experiments in the driving simulator. For more information, contact Arno Eichberger at arno.eichberger@tugraz.at
Arno EICHBERGER
Assoc.Prof. Dipl.-Ing. Dr.techn.
Institute of Automotive Engineering
Inffeldgasse 11/II
8010 Graz
Phone: +43 316 873 35210
arno.eichberger@tugraz.at