… an academic year in Bordeaux

Bernd Somitsch is studying Mechanical Engineering and Business Economics at TU Graz and is setting off for the Université de Bordeaux for one year to gain experience. 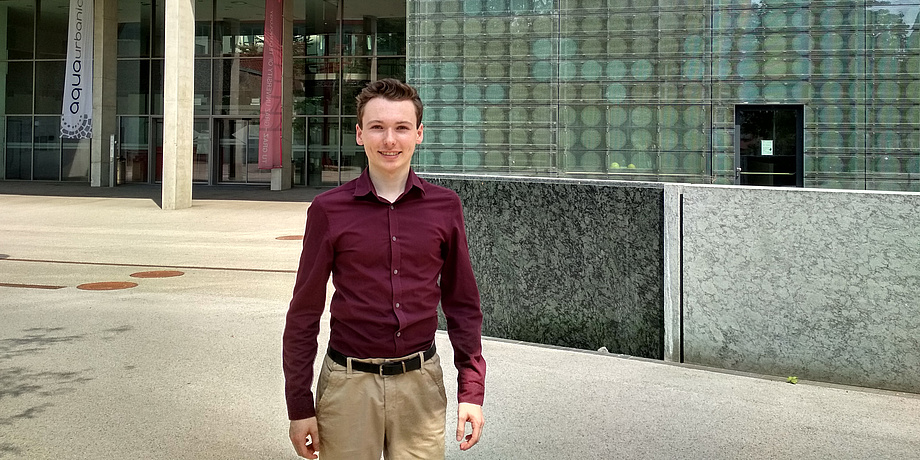 Still in Graz, soon to be in Bordeaux: Bernd Somitsch in his appropriately Bordeaux-coloured shirt at Campus Neue Technik of TU Graz.
I will spend 2017/2018, the coming academic year, in Bordeaux, France. A stay abroad offers students boundless opportunities and possibilities, combining university education with personal development and an enormous accumulation of experience. One of my professors at TU Graz specifically pointed out in a lecture that “a business economist should speak at least one foreign language – but English hardly counts as foreign language any more“.

I am keen on facing up to new challenges in another culture and also hope to benefit in terms of independence and flexibility.

I already learnt French in school. A competition of the Austrian Economic Chamber earned me a two-week language stay in Paris. This taught me the importance of being able to speak the language fluently – exactly what I want to have achieved when I finish my studies. Talking to other students who studied abroad made me realise that such a stay also always triggers a positive personal development.


I am keen on facing up to new challenges in another culture and also hope to benefit in terms of independence and flexibility. As Austria is located right at the heart of Europe, openness and intercultural competence are important assets, especially when it comes to working in teams with a high degree of diversity and initiating co-ordinated action at executive level in several countries simultaneously. I am eager to look at things from new perspectives and get to know people to work with and tackle the challenges of the future, resulting in a network of committed people throughout Europe. This was my motivation for applying for the “Gusenbauer Scholarship“, which helps cover the expenses of spending one year at Université de Bordeaux. I was one of the lucky winners. 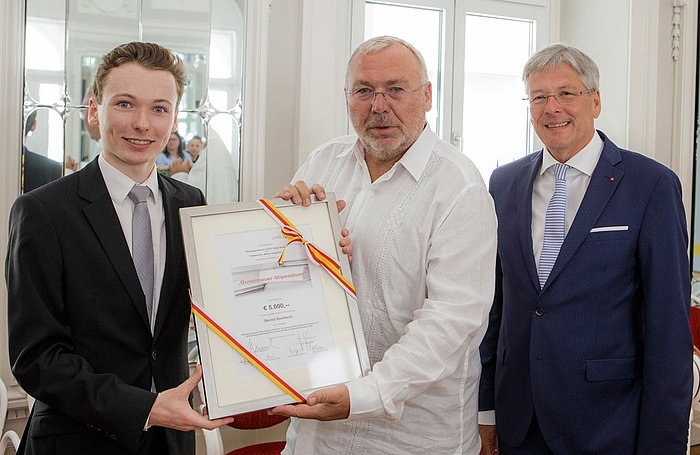 Bernd Somitsch, Alfred Gusenbauer and Peter Kaiser, Governor of their Province of Carinthia , during the scholarship award ceremony.

Bordeaux is usually associated with Bordeaux wine and the colour “Bordeaux” – a dark shade of red. However, my reasons for choosing Bordeaux were slightly different: Bordeaux, a university town with some 50,000 students enrolled at my chosen university, is an important hotspot in the French education system. The “Université de Bordeaux” is made up of various individual universities, but projects itself to the outside world as a single unit. The exchange between its individual universities is an everyday fact, which helps it achieve a high degree of interdisciplinarity – especially at the interface between technology and business, the area I am most interested in. UNESCO recognised the centre of Bordeaux as a world heritage site in 2007. Although it is currently undergoing modernisation, retaining the charm of its century-old history is treated as a top priority. The town was also crowned “Best European Destination” in 2015 and “Best-In-Travel City” in 2017.

France is Austria’s number three export destination within the European Union. This is why knowing the French language and the country is important for our business location. In addition to English and German, French is also one of the three working languages of the European Union. The immersion in the language and culture of the host country will help me reduce linguistic barriers and become truly familiar with the culture.

Another country, another university organization system?

As a research assistant at TU Graz, I contributed to university research and gave lectures while I studied. This also helped me gain an interesting insight into the organizational side of running a university – hence my interest in country-specific differences in the university system. I am interested in the differences between the systems and their advantages, which obviously also involves the question of whether they could be introduced successfully in Austria if appropriately adapted.

University education goes hand in glove with personal development and an immense accumulation of experience.

One of the most outstandingly positive aspects of a stay abroad as a student is that I can gain these valuable experiences and take advantage of newly arising opportunities while studying. Thus university education goes hand in glove with personal development and an immense accumulation of experience. Later on, I will be able to put these experiences, together with innovative ideas, to good use in Austria.
The “Gusenbauer Scholarship” is awarded by Alfred Gusenbauer, former Austrian Chancellor, in co-operation with the province of Carinthia. Every year, two students receive a grant of EUR 5,000 each for a one-year stay abroad as part of their studies. For further information about the scholarship, please visit www.ktn.gv.at/Service/News.
Bernd SOMITSCH
Phone: +43 650 5737 424
Email: bernd.somitsch@gmail.com