TU Graz physicists study steel on board the ISS

For the Institute of Experimental Physics, heading into outer space is on the agenda: the researchers are taking part in an experiment on board the international space station to measure the surface tension of Böhler steel. 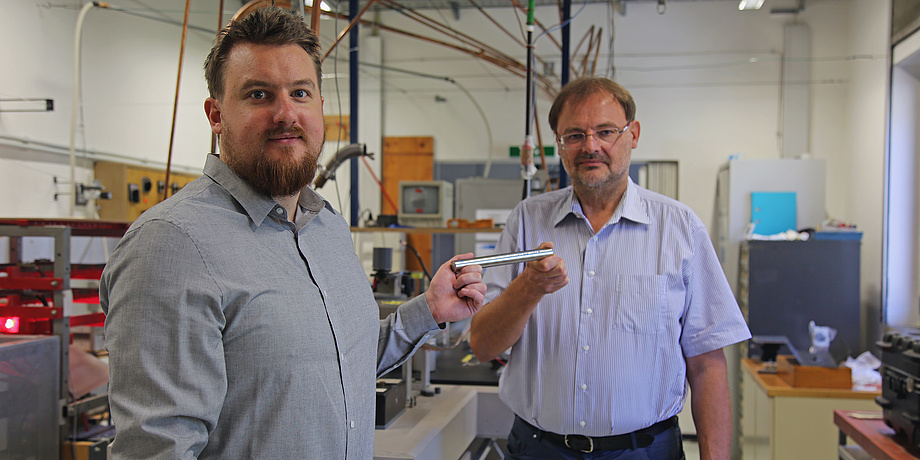 Peter Pichler (left) with working group leader Gernot Pottlacher (right). From the steel rod in their hands, they cut the small balls that are now being examined on the ISS. © TU Graz

"We’ve got something really great for you." When experimental physicist Gernot Pottlacher starts a phone call with these words, that's exactly what is behind it: something really great indeed. In this case, a trip to the International Space Station. Not for the researchers at Graz University of Technology themselves, but for a sample of material that is going to be examined in orbit around the Earth.

For many years, the Institute of Experimental Physics at Graz University of Technology and the Styrian industrial company voestalpine BÖHLER Edelstahl GmbH & Co KG have been conducting joint research on the surface tension and temperature dependence of different types of steel. "This data is of great importance for both science and industry," explains Gernot Pottlacher. "It demonstrates how the material behaves when it is heated and cooled, that is, how it changes from the solid to the liquid phase and back again". Steel in particular is the focus of interest here, because it will be needed in metallic laser 3D printing to produce steel components using this new remelting technology in the future.

Conventional examination methods only work up to a certain upper temperature limit. At higher temperatures, problems can occur with the sample container, such as interactions between the container and the sample, and this would falsify the measuring results. This is why Pottlacher and his research group use the method of levitation, which is used to study such materials. "We let the samples hover electromagnetically or electrostatically and thus avoid contact with the sample container." On Earth, gravity is not an insignificant component altogether, influencing the measuring results, but in space, this influence vanishes, allowing more accurate measurements to be made.

Controlled (and watched) from Earth

For the experiments, the Styrian team works together with Japanese and US-American researchers and uses the Electrostatic Levitation Furnace - ELF for short. ELF is an experimental setup of the Japanese Aerospace Exploration Agency (JAXA) in the Japanese experiment module Kibo at the International Space Station. The sample is fed into the experimental unit and positioned accordingly. A laser then heats and melts the floating steel sample. Subsequently, various sensors measure the density, surface tension and viscosity of the molten material. When the material cools down again, the researchers can observe and measure this process closely, too. The experiment is controlled from Earth, where Pottlacher and his team follow the event live while the data obtained is passed on directly via downlink.

"In order to be included in an experiment on board the ISS, the material must already have been used in space travel," says Pottlacher. "An American colleague was looking for exactly this material that we are investigating. The L625 type steel has already been installed in rocket engines and is, among others, produced by our long-standing partner voestalpine BÖHLER Edelstahl GmbH & Co KG." Once the tests have been completed, the data will be published by Graz University of Technology as part of a wide-ranging dissertation, as Pottlacher explains: "In his dissertation, Peter Pichler is looking into a complete data set of a material in liquid form. He has already analysed it in many different ways for this purpose. Now the data from the ISS is being added, and in the autumn the steel sample will be examined once again in zero gravity on board a reduced-gravity aircraft.“ 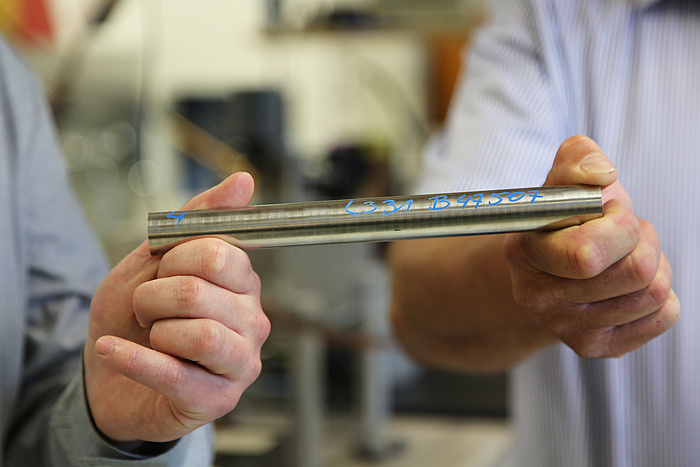