In the EU project TURANDOT, researchers from TU Graz investigated a sharkskin-like coating for engine blades and tracked the flow of cooling air in the engine. In this way, they make aircraft more fuel-efficient, less expensive and quieter. 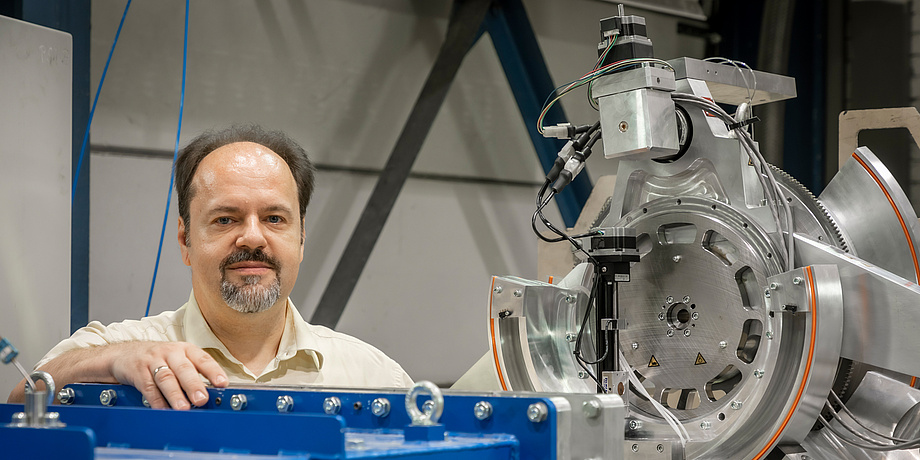 An engine is more efficient and quieter the larger and slower the fan (note: that's the turbofan at the front of the jet engine) is. This is driven by the low-pressure turbine, which is thus also given a larger diameter. The greater this diameter, the shorter and steeper ("more aggressive") the transition duct between the high-pressure and low-pressure turbines must be. A not unproblematic geometry, as Emil Göttlich, researcher at the Institute of Thermal Turbomachinery and Machine Dynamics at Graz University of Technology (ITTM) explains: "A transition duct that is too short could cause a flow separation because the air may not be able to follow the flow path due to the more aggressive geometry." A loss of pressure would result in reduced engine performance.

Together with his research group, Göttlich is devoting himself to this transition duct – a key component in the aircraft engine that must withstand temperatures close to 1,000 degrees Celsius.

In the Beyond Europe project TURANDOT (Turbulence and Duct Surface Optimization in Turbofans), the project team was able to demonstrate that the so-called riblet coating enormously improves the efficiency of the transition duct and thus engine performance. This coating was developed by bionic surface technologies. It is a sharkskin-like surface coating consisting of nano- and microstructured grooves (riblets) that reduces friction on the duct wall and thus flow resistance. Göttlich continues: "With the so-called riblet technology, we can reduce the pressure loss in the transition duct by up to 5 percent, regardless of its geometry. Even though this may not sound like much at first glance, fuel consumption can be noticeably reduced in this way. This is not only important for the environmental performance of aircraft, but also has a high financial benefit for airlines, especially since their profit is about 1 percent of the cost of the jet fuel."

The research project also investigated the influence of cooling air flows on engine performance. The turbines and transition duct are located directly after the engine's combustion chamber and would have to withstand temperatures of up to 1,000 degrees Celsius. To prevent excessively rapid wear, the turbines and the transition duct are cooled with cooling air from the engine's compressor. However, this cooling air mixes with the hot main flow that drives the aircraft and thus disturbs the aerodynamics – the efficiency of the engine is reduced.

On the experimental turbine test rig in the turbomachinery laboratory, Göttlich and his team were able to reproduce engine relevant flow conditions but at lower temperatures together with varying the cooling air flows as desired. For this purpose, they used a seed gas technology specially developed for these experiments. The researchers enriched the cooling air with small amounts of carbon dioxide and nitrous oxide. Using these tracer gases, they were able to trace the paths of the various cooling air streams.

The tests showed that the cooling air flows through the transition duct in layers and does not cover the walls flatly, as previously assumed. This has a considerable influence on the heat transfer of the engine components. The cooling is not as effective as assumed.

On the other hand, this knowledge can be used to selectively solve thermal problems in the engine: "In the future, the relative arrangement of the turbine blades will allow engine manufacturers to determine where the cooling air layers run in the transition duct and which components should be cooled more," says Göttlich, who also expects this to result in savings in maintenance costs.

From laboratory to application

The engine manufacturer General Electric Aviation (Cincinnati, USA), which supplied the test geometry, will now use the set-up (transition duct as short as possible, riblet coating, flexible turbine blade arrangements) in a new generation of engines, which it hopes will be quieter, require less maintenance and be more fuel-efficient.

This research project is anchored in the Field of Expertise “Mobility & Production”, one of the five strategic research foci at TU Graz.

TURANDOT was funded as part of the "Beyond Europe" programme by the Federal Ministry of Science, Research and Economy to the amount of 500,000 euros. 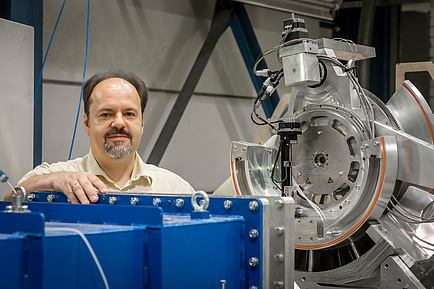 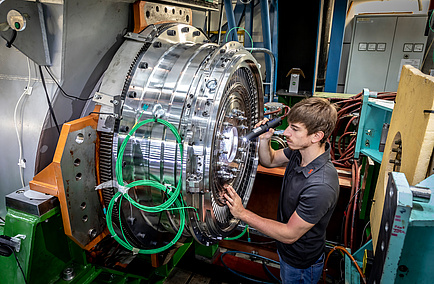 In the Transonic Test Turbine Facility, the inflow conditions in an aircraft engine can be realistically simulated from take-off to landing (pictured: Filippo Merli, PhD student at the Institute of Thermal Turbomachinery and Machine Dynamics at TU Graz). © Lunghammer – TU Graz 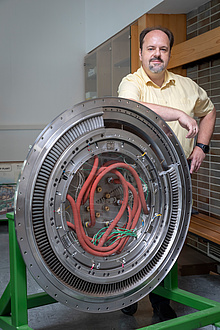 TU Graz researcher Emil Göttlich with the turbine centre frame - a central component of an aircraft turbine and the subject of research at the Institute of Thermal Turbomachinery and Machine Dynamics at TU Graz. © Lunghammer – TU Graz