Prime Numbers: The Atoms of Mathematics

Christian Elsholtz has made it into the academic conversation in recent months with a mathematical "joke." The mathematician talks about his humour, his work, and his love of prime numbers. 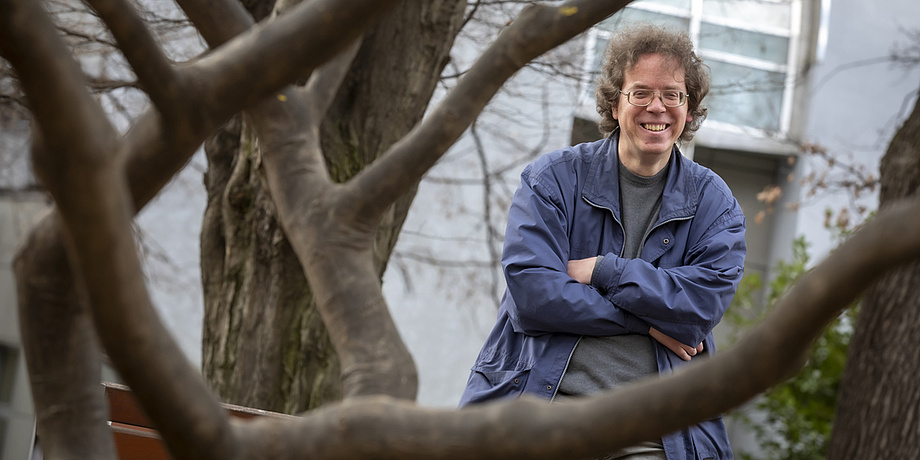 Numbers are at home under Christian Elsholtz's blond curls. Especially prime numbers. "17 is my favourite prime number," he says with a sly grin. The explanation is lost in the wind blowing that day in the park behind Campus Alte Technik. But one thing remains, like the leaves on the wooden benches: this man loves numbers.

"Prime numbers are like atoms," he explains. "All other numbers consist of them, but they themselves can't be divided any further." Above all, the mathematician is interested in the gaps between prime numbers. How big can these gaps be? Is there any regularity? "These gaps are still very difficult for us to deal with. A big breakthrough was made a few years ago, but we still don't really understand it."

I imagined a world in which Euclid's theorem was not true. A world in which there are only a finite number of prime numbers. This would contradict many mathematical results, including this theorem of Fermat or Wiles.

In the mood for academic jokes

When Christian Elsholtz talks about his work, words sometimes gallop away from him. It becomes clear that he tries hard to slow down his thoughts and explain in an understandable way what is part of his daily work. This is also the case, for example, when he makes an academic joke, the punch line of which, however, is in need of an explanation for mathematical laymen to understand it. His latest "joke" led to a scientific paper that was even discussed by Fields Medallist Timothy Gowers (note: one of the highest honours in the mathematical world). The joke was about a work on prime numbers. "I used a sledgehammer to crack a nut," Elsholtz says, smiling again. "I took a very strong mathematical result and used it to prove a much smaller result. Several mathematicians have had this idea, but no one has taken as big a 'sledegammer' as I have." What exactly did Elsholtz do? He took two mathematical results and showed that the stronger of the two – Fermat's last theorem – determines the weaker – Euclid's theorem of the infinity of prime numbers. Fermat's last theorem states that the nth power of a number plus the nth power of a second number can never result in the nth power of a third number, i.e. an + bn can never be cn. (Here a, b, c and n are positive integers, and n is at least 3). Fermat scribbled this sentence as a note in the margin of a book, but he never proved this assertion. This was achieved by Andrew Wiles a good 300 years later. Euclid proved in 300 BCE that there are an infinite number of prime numbers. "I imagined a world in which Euclid's theorem was not true. A world in which there are only a finite number of prime numbers," explains Elsholtz. "This would contradict many mathematical results, including this theorem of Fermat or Wiles." Thus Elsholtz succeeded conversely in providing a new proof that there are an infinite number of prime numbers. "The work emerged while I was playing with mathematical ideas and was intended as a joke. That's how it was perceived, at least almost always...", says Elsholtz, who was delighted with the echo.

Of Greeks, knots and libraries

Why Christian Elsholtz chose a very old mathematical theorem becomes evident when you listen to him a little longer. He explains about Pythagoras, the Babylonians, and the beginnings of mathematics and geometry. He explains about knots in threads that served as the first scales on which to calculate spaces. "I started borrowing mathematics books from the library as a teenager because it just interested me," he says. "Also a lot of history about the development of mathematics."

Immersed in one of these books, he also first came across his current field of research: "The book was about the current record for prime gaps. I found it fascinating and I knew I wanted to do something like that." Researchers currently still have a hard time with gaps between prime numbers. For example, it is not known whether the prime gap of 2 between two prime numbers (such as between 17 and 19) exists infinitely often – the twin prime conjecture remains unproven to this day. "A few years ago, there was a breakthrough that was also widely discussed in public. Since then, we know that there is a gap that is at most 246 in size and occurs infinitely often. But we still don't know exactly how big that gap is."

So there is still a lot to do in Christian Elsholtz's field of research. The mathematician has just started the research project ArithRand with colleagues from Austria and France. In it, the group deals with arithmetic randomness – random-looking properties of numbers. For Christian Elsholtz, this is a stroke of luck. This will allow him to fund his research and, in addition, a post-doc position for the next three years. "I just enjoy math(s) immensely," Elsholtz says before returning to his office, to prime gaps.

This research area is anchored in the Field of Expertise “Information, Communication and Computing”, one of five strategic foci of TU Graz.
You can find more research news on Planet research. Monthly updates from the world of science at Graz University of Technology are available via the research newsletter TU Graz research monthly.