In the FET Open project ARTIBLED, TU Graz protein-designer Gustav Oberdorfer is working together with researchers from Spain and Italy on environmentally friendly and inexpensive light-emitting diodes. 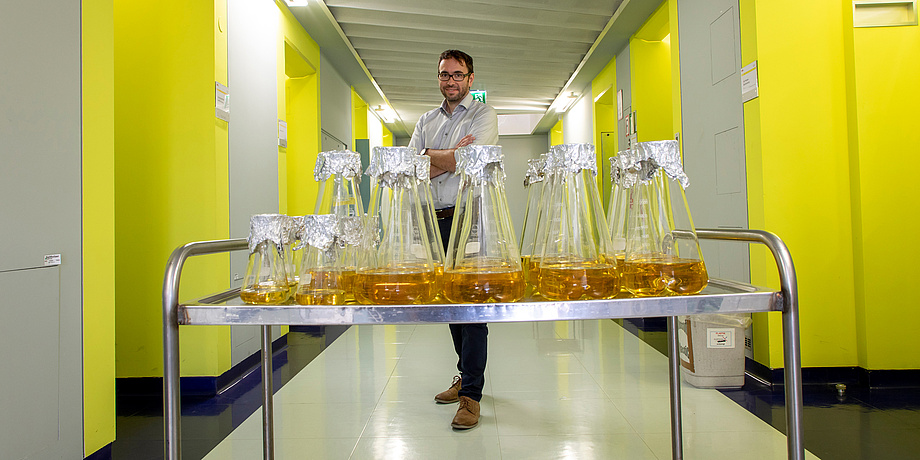 Gustav Oberdorfer has been researching at the Institute of Biochemistry at TU Graz since February 2018. © Lunghammer – TU Graz

The basis for this vision is being laid at the Institute of Biochemistry at Graz University of Technology, where Gustav Oberdorfer and his team are designing proteins with the help of simulation software. "For this project, we’re analysing fluorescent protein structures from nature and testing how we need to modify them so that they bind different fluorescent organic molecules," explains Oberdorfer. LEDs emit short-wave blue light which is then absorbed by a layer of inorganic lighting materials and converted into light of longer wavelength. The entire spectrum then results in the white light as we perceive it.

You can read more about Gustav Obersdorfers work on Planet Research.

Oberdorfer developed the idea for the project together with cooperation partners from Spain and Italy who worked on the topic independently of each other and were able to achieve promising success.

Rubén Costa from the Madrid Institute for Advanced Studies (IMDEA) developed a stable organic LED coating as an alternative to conventional LED coatings, which usually consist of problematic rare earth minerals. The mixture consists of organic polymers in which he and his team managed to embed fluorescent proteins. These fluorescent proteins are found in marine organisms and are used by them as a light source for hunting, communication and self-protection. The luminosity that can be achieved with such devices is however still too low to use them in lamps that illuminate entire rooms.

Researchers of the Department of Chemistry at the University of Turin led by Claudia Barolo are in turn dealing with the synthesis of organic dyes that have a good light emitting efficiency and are used in organic light-emitting diodes (OLEDs). However, many of these dyes are costly and complex to synthesize. As part of the FET Open project, Barolo and her team are now looking for a suitable dye that can be produced with minimal effort and that can be modified so that it can be incorporated into proteins as an artificial amino acid.

The FET Open project ARTIBLED now brings together the successes of all groups. The goal is to use bacteria to develop completely new artificial fluorescent proteins. To this end, the Graz biochemists first simulate thousands of different hypothetical proteins that are to bind specifically to the synthetic dyes. A handful of these proteins – namely those closest to the structure of naturally fluorescent proteins – are then ordered as synthetic DNA constructs. The next step is to investigate whether these proteins really bind the dyes for which they were designed. As soon as this is confirmed, these new, artificial fluorescent proteins will be integrated into the polymer matrix and tested for their suitability with regard to bio-LEDs.
"The plan is that we will 'harvest' the proteins from the bacterial cell; in other words, we will be able to grow some part of the light sources," said Oberdorfer, hoping for a proof of principle at the end of the project in four years' time.

This research project is part of TU Graz’s Field of Expertise "Human & Biotechnology", one of five research foci of Graz University of Technology.

The ARTIBLED research project is funded by the FET Open research funding programme under the EU Horizon2020 programme to the amount of approx. 2.6 million euros. FET Open is reserved for unconventional, new research ideas at an early stage which aim at breakthroughs for new technologies. 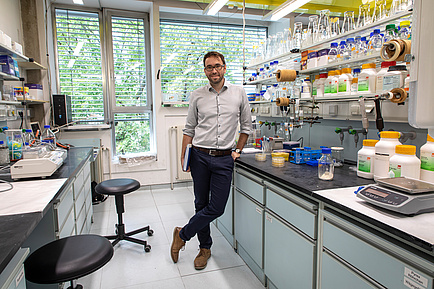