A Greener World with Biotechnology

It makes natural processes for industry more environmentally friendly or even possible at all, thus improving medical and everyday applications. A glimpse into the enzyme-rich world of biotechnology at TU Graz. 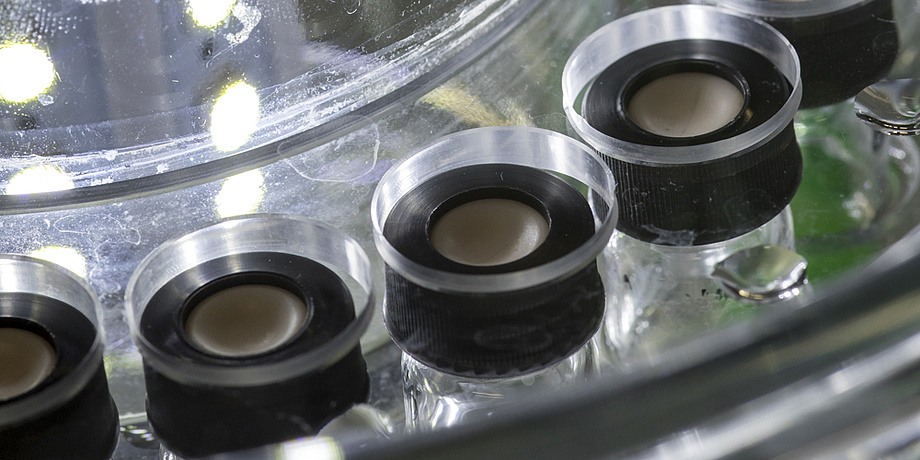 Numerous projects at TU Graz deal with the big questions of the future.

“A theory says that the sedentarization of humans is related to beer brewing,” biotechnologist Birgit Wiltschi from TU Graz’s Institute of Molecular Biotechnology jokingly tells us. After all, brewing beer “was not really possible as long as people were constantly on the move.” In fact, the beginnings of biotechnology lie precisely there: in beer brewing. And in baking bread. These were the first processes for which man used bacteria and microorganisms to produce something new. Today, however, modern biotechnology goes much further, as the researcher explains: “It’s no longer just about using microorganisms as they occur in nature. It’s also about tailoring them to a specific application.”

Biotechnology is about adapting microorganisms to a specific application, tailoring them. A targeted change to the system in order to make something useful. – Birgit Wiltschi, Institute of Molecular Biotechnology

At her workplaces at TU Graz and at the competence centre ACIB (Austrian Center for Industrial Biotechnology), Wiltschi herself is busy modifying and optimizing enzymes and proteins at will. “Nature has developed a system that works perfectly for her purposes. Proteins and enzymes are her basic tools. We’re now trying to expand this kit and use chemical methods to enable new functions.” Among other things, work is being done on a kind of “push button”-component for proteins – these are reactive amino acids that are specifically placed in a protein and thus create a controllable docking site for other substances. For example, a self-sustaining and locally acting drug could be generated from it: “I can insert these push-button amino acids, for example, in antibodies that seek out cancer cells. These push buttons will realease the therapeutic agent only after the antibody has found a cancer cell.” This therapy would be much gentler because it would have fewer side effects than, for example, conventional chemotherapy. It does not act on the whole organism, but specifically at the place to be treated. “A precise amount of the drug must be able to be attached to the protein at a precise location – our push-button amino acids allow that.”

At the same institute as Wiltschi, the three doctoral students Kamela Myrtollari, Andrea Nigl and Karishma Shah are working on bio-based polymers from agricultural residues, which they want to optimize for the production of bioplastics. “We are dedicated both to improving the polymers themselves and to opti-mizing the production process,” explains Andrea Nigl, “we try to produce improved monomers using different approaches. The more monomers we have available, the more polymers with dif¬ferent properties we can ultimately build from them.”

BioTechMed-Graz is a research association of the three Graz universities TU Graz, the University of Graz and the Medical University of Graz and promotes cross-laboratory research. Cross-institutational research is done in lighthouse projects in which all three research institutions are working together – currently, for example, in the project “Dynamics of subcellular partitioning through protein modification (DYNIMO)” on the methylation of arginines, which is thought to be associated with cancer and neurodegenerative diseases. At TU Graz, Birgit Wiltschi from the Institute of Molecular Biotechnology is particularly involved in the project. The research association also funds Young Researchers Groups, where TU Graz biotechnologist Anita Emmerstorfer- Augustin heads a research group that focuses on sterols, among other things.

Sugar as a Basis

Also co-located at ACIB and TU Graz are the researchers Christiane Luley and Barbara Petschacher, who work primarily on carbo-hydrate-activated enzymes. In the EU-H2020 CARBAFIN project, for example, which has already reached the final researchphase, they and their team are working on optimizing the synthesis of glucosides starting from sucrose – table sugar – and raising it to an industrially interesting scale. Table sugar is a renewable raw material and can be obtained in far greater quantities than the food industry needs. High-quality glucosides, in turn, can be used as active ingredients in medicine, cosmetics or as nutrition supplements. “In this project, we are working on the one hand on the development of robust biocatalysts, i.e. enzymes, which we are improving in terms of their interaction in multi-step conversions. On the other hand, we want to make the process fit for production on an industrial scale through targeted integration of the individual unit operations, supported by ecological and economic evaluation.” says Barbara Petschacher, explaining the two research directions of the project. An important add-on is that in addition to glucosides, fructose is also obtained in this process, which the researchers are not disposing of but testing for its suitability for the production of bioplastics.

Human milk oligosaccharides (HMO) are another important topic for researchers – these are multisugars that occur in human breast milk and make it particularly valuable for infants. “The aim here is to optimise the enzymatic production of oligosaccharides to give breast milk substitutes the same properties as breast milk by adding these HMOs. The prebiotic properties of the HMOs could also become interesting for future administration to adults.” 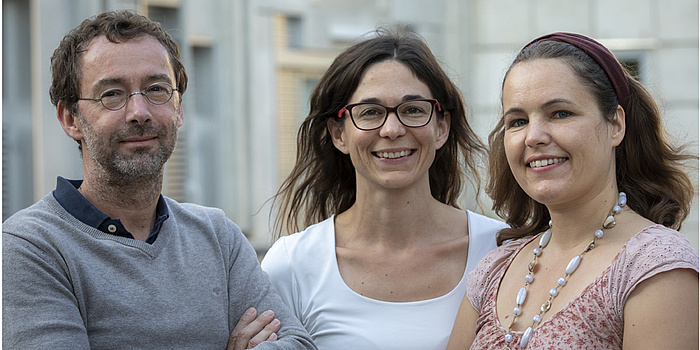 Martin Pfeiffer at the Institute of Biotechnology and Bioprocess Engineering is also working on carbohydrate-activeted enzymes. His focus is on their reaction mechanisms. Pfeiffer investigates enzymes whose reaction products are special sugars such as fucose. These sugar molecules are involved in the regulation of the human immune system or serve as food for probiotic intestinal bacteria, which thankfully displace pathogenic bacteria. In addition, the researcher just made headlines with the generation of pseudouridine, an important component of synthetic RNA. “We’ve managed to make it in a more environmentally friendly way, less expensively and from organic ingredients,” Pfeiffer said. “For me, biotechnology is so interesting because we get to understand enzymes and then modify them to perform a desired reaction.”

Biotechnology is about figuring out how biological processes work in detail and then applying them.” – Martin Pfeiffer, Institute of Biotechnology andBiochemical Engineering

From Cellulose to Biofuel

The application of biotechnologically produced products or even biotechnology itself has become an integral part of everyday life, says Manuel Eibinger from the Institute of Biotechnology and Bioprocess Engineering, whether textiles – for example, the optical effect of stone-washed jeans is now produced by the use of cellulases – or the treatment of wastewater. “A sewage treatment plant is basically a big bioreactor. Microorganisms are used to purify the water,” he explains. As further impressive examples, he mentions microbial bioremediation after environmental pollution or that detergents, sometimes thanks to the use of enzymes, can remove dirt even at low water temperatures.

Biotechnology is the use of biological systems for industrial problems.” – Manuel Eibinger, Institute of Biotechnology and Biochemical Engineering

Eibinger himself is working on the degradation of cellulose, a polysaccharide that is indigestible for humans. “Bioethanol – i.e. fuel - can be produced from cellulose,” the researcher explains. “Because humans cannot digest it, we also have no problem using a foodstuff for fuel production.” To break down the cellulose, he uses different enzyme systems that are issolated by either the fungus Trichoderma reesei or the bacterium Clostridium thermocellum. “We compare both systems and sometimes try to understand under which framework conditions they function optimally.”
Picture: A man at a lab 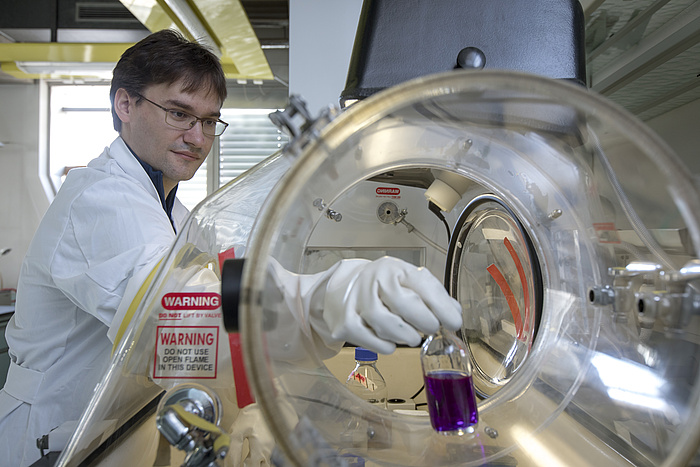 Peter Macheroux’s work is still about basic research, but always with one foot in the direction of application. Macheroux, head of the Institute of Biochemistry, himself focuses his research on enzymes and processes that can be used in medicine – as fungicides, antibiotics and emergency drugs. For example, the enzyme dipeptidyl peptidase 3 (DPP3) is being studied, and may play an important role in life-threatening disease processes: “We know that DPP3 occurs at elevated levels in certain acute conditions such as myocardial infarction. The higher the concentration, the lower the probability of survival. We are now trying to inactivate this enzyme and thus increase the chances of patients’ survival in a life-threatening situation.”

Biotechnology involves everything,  where basic research from molecular and non-molecular bioscience has applications in industrial, agricultural or pharmaceutical processes. – Peter Macheroux, Institute of Biochemistry

Gustav Oberdorfer, who also works at the Institute of Biochemistry, is primarily involved in protein design. The goal is to design completely artificial proteins that can then perform a specific task. In his ERC Starting Grant-winning project HelixMold, his team is investigating designed -helical proteins, which are very thermostable. “Proteins or enzymes normally function best at a temperature that often goes hand in hand with the ambient or body temperature of the organism from which they originate. So in the case of humans, at around 37°C. Above this temperature, however, many of these proteins begin to unfold and lose their function,” Oberdorfer explains. “We were able to design proteins that are still stable at 90 or 95°C, which is very interesting for many processes.” Building on this, Oberdorfer now wants to use these thermostable proteins to create new binding sites for mol¬ecules without losing stability. The FET Open project ARTIBLED, in which Oberdorfer is centrally involved, started at the begin¬ning of 2020. Together with an international research team, he wants to produce bio-LEDs that contain biological components – thermostable proteins – instead of rare earths. “Our idea is that these proteins can then be easily grown in the bacterium E. coli anywhere in the world.” 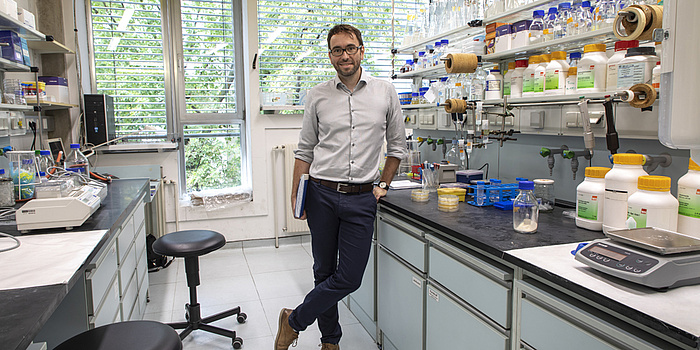 Andreas Winkler, Institute of Biochemistry, also works on proteins and light, but he focuses on processes that can be controlled using light. “We want to understand these light-activated proteins and use them to perform a specific task. “Those photoreceptors for example control the day-night-rhythm in nature – similar proteins can be specifically used in the laboratory to activate motor-neurons in an organism, therby providing ways to control its behaviour. The goal is to design optogenetic tools that can be used for drugs that can be activated in the human body by irradiation. “Light as a trigger has many positive properties. It can be spatially controlled very well and can be switched on and off selectively. In this respect, it would be possible to introduce an active ingredient into the body and then use light to activate it in a very targeted manner at a specific location and a specific time in the body,” says the researcher.

Tomislav Cernava from TU Graz’s Institute of Environmental Biotechnology is taking a completely different approach to biotechnology. He wants to target the plant microbiome with microorganisms that keep the plant healthy. “For example, we found a bacterium that can actively keep the plant healthy. If we can establish this bacterium in the seed microbiome – the transition between generations – then we could design very robust plants,” he explains. One of his research projects focuses on the microbiome of the cannabis plant, which can be used both as a crop and in medicine. 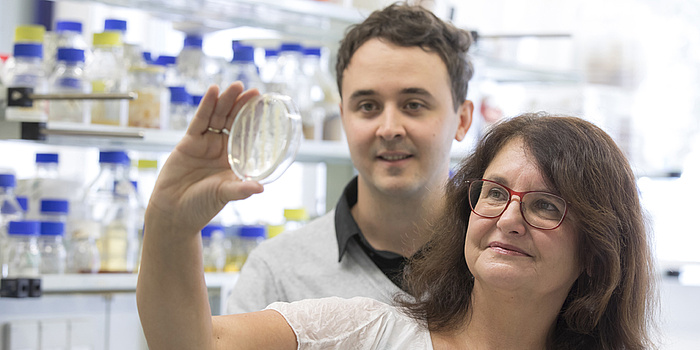 Currently in all Laboratories

According to Birgit Wiltschi, however, the most prominent application of biotechnology is currently found in various syringes: the mRNA vaccines that are currently being deployed as protection against the Covid-19 coronavirus. “This is biotechnology at its highest level and would never have been possible without years of research in the field.”