Peter Pichler from TU Graz’s Institute of Experimental Physics is researching liquid metal. At the moment, he is waiting for data from the ISS, which he will analyse in his dissertation. 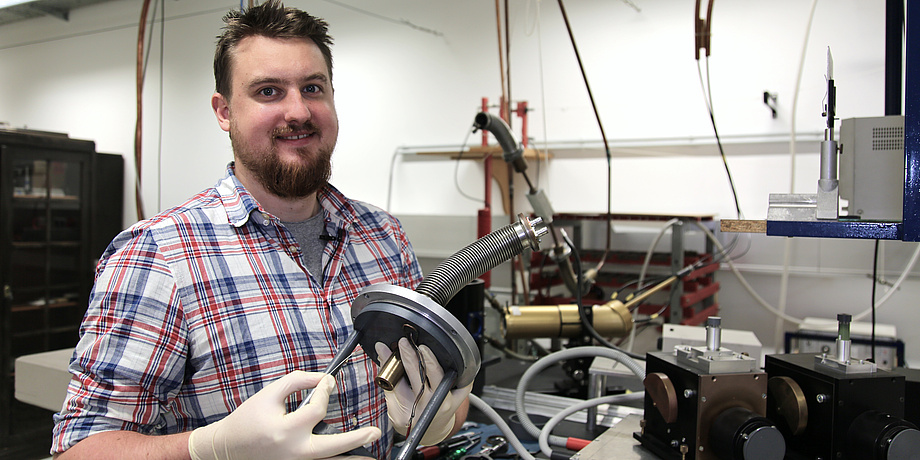 “When I was a child, I always wanted to become an astronaut. Obviously!” he says with a smile, thinking back to his childhood as he sits next to an ohmic pulse-heating apparatus. “And I’ve taken a big step towards doing just that.”

From Graz to the ISS

It’s a long way from the Styrian capital to the ISS. Peter Pichler, Institute of Experimental Physics, hasn’t taken the trip himself (at least not yet). But several steel bearings, which he cut from a short steel rod several months ago, have. The leftover rods are lying here and there in the lab. Meanwhile, the bearings are on the International Space Station, 400 km above Graz – depending on its current orbit around the Earth, the station whizzes through the skies above Styria 16 times a day.

In the station’s Japanese module, called Kibō, the Japan Aerospace Exploration Agency (JAXA) operates the JAXA ELF research facility, where it is running tests on various materials including steel samples using electrostatic levitation. An electric field causes the samples to float and liquefies them. Levitation is necessary because liquid metal is extremely reactive at very high temperatures. In this state, the metal would react with any container it was kept in, so the data generated would be distorted. “There are many ways to conduct contact-free experiments,” Pichler explains. “At TU Graz, we use electromagnetic levitation, as well as an ohmic pulse-heating apparatus, although this doesn’t make the samples float.”

When I was a child, I always wanted to become an astronaut. Obviously! And I’ve taken a big step towards doing just that.

The design of the experiment on the ISS could also be replicated on Earth. But there is a very good reason for making the long journey into space: gravity. “I’m conducting research into the surface tension and viscosity of liquid metal samples. To generate data on their viscosity we have to make the sample oscillate and then observe its behaviour as it decays. For this to work, we have to briefly switch off the electric field. Here on Earth, the sample would just fall to the ground, but in space it continues to float. What’s more, the experiment design should ensure that the liquid sample is as perfectly spherical as possible – on Earth, gravity deforms the sphere, creating droplets .”

Sending a sample to the ISS is expensive and time-consuming. Alternatively, researchers can test their materials on parabolic flights – here, aircraft simulate weightlessness for a few seconds at a time by quickly climbing and descending. Pichler wanted to test his steel samples using this method in spring, but due to the coronavirus pandemic, the experiment was put back to the autumn. 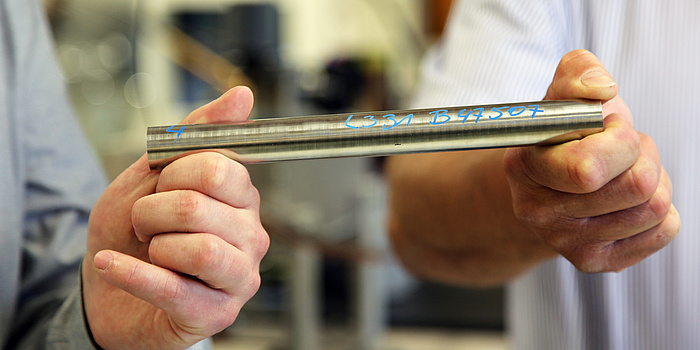 At the Institute for Experimental Physics, the steel sample was prepared for testing on the ISS.

Pichler will publish the data from the ISS experiments and other tests in his dissertation, where he investigates thermophysical properties of two types of commonly used steel. The data are important not only for research, but also for industry, as Pichler points out: “Liquid metal is used to make metal components – for example, they can be cast or 3D-printed. It’s essential to know how the material behaves in a liquid state and when it cools.”

In the ISS experiment, Pichler will analyse steel produced by upper Styrian company voestalpine BÖHLER Edelstahl: it is particularly corrosion-resistant and is frequently used in maritime applications. The second type of steel is a standard reference material provided by the National Institute of Standards and Technology (NIST) in the US. This means that the composition of the steel is precisely measured. Pichler’s data will form the basis for further research. NIST and TU Graz recently published a joint paper.

Pichler watches the experiments on the ISS live on his laptop, taking part in a video conference with researchers in the USA and the Japan-based team that controls the experiments. His day-to-day research work isn’t always so exciting: “For one thing, my experiments using the pulsed ohmic heater only last 30 microseconds,” he reveals. “And after that I need several weeks for data analysis, visualisation and uncertainty analysis.”

Peter Pichler’s path into experimental physics was by no means clearly marked out. “A few months before starting my degree, I had no idea whether I wanted to study physics, maths or biology.” But he had been especially interested in physics during his school days. “I had a really great physics teacher who taught us a lot about modern physics – things like the theory of relativity and quantum mechanics. That was just so completely different to the way I had looked at the world until then.” Ultimately, a primary school friend played a decisive part in Pichler’s choice of degree programme. “My friend was so excited about his physics degree at TU Graz that I decided to join the programme as well.” Pichler aims to finish his dissertation in 2021. It remains to be seen how things will go from there. But the young researcher has a plan, as he tells us with a grin: “My school friend has always given me some good ideas. He’s just finished his degree so I’ll just wait and see what direction he moves in!”

Until then, Pichler will carry on working with his ohmic pulse-heating apparatus humming melodically in the background. The device can heat an upright piece of metal wire so quickly that it remains standing in liquid form for a brief moment, so it can be examined without being touched – another method that Pichler is using to shed new light on his metal samples. 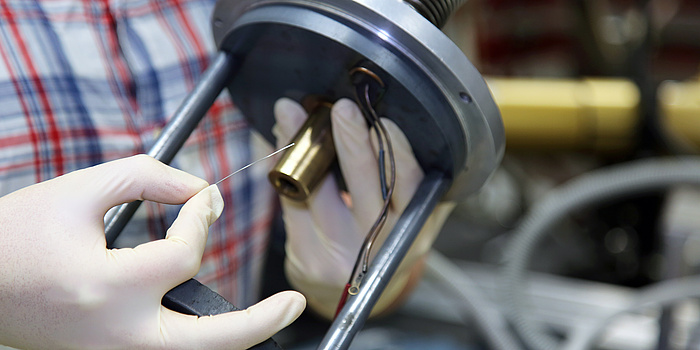 The wire is clamped in this sample container so that it can later be examined in Ohm's pulse heating.