A passion for turning the IT world upside down

Daniel Gruss is part of the team that caused chaos in the IT world with the discovery of the system loopholes Spectre and Meltdown. Few people thought he was career material – but he won through. 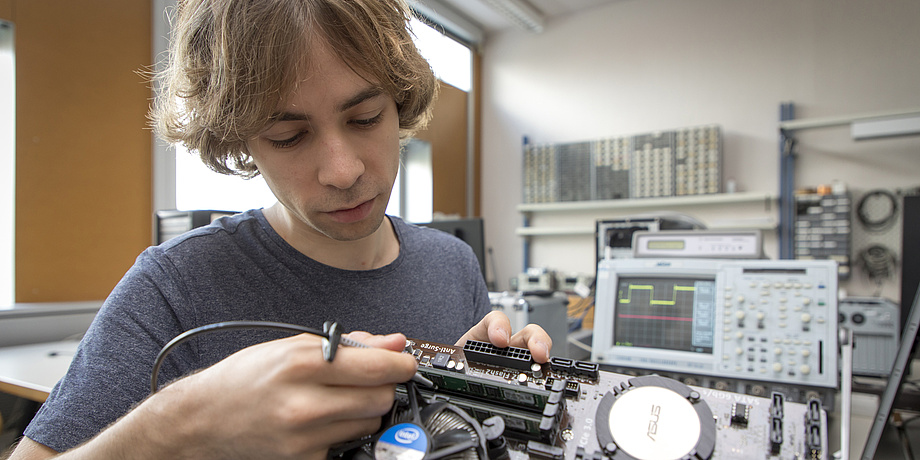 Daniel Gruss knew very early on that his future would include many computers - today he is assistant professor at the Institute of Applied Information Processing and Communication Technology at Graz University of Technology. © Lunghammer – TU Graz

It was the night of the 3rd of January 2018 when the day-to-day life of Daniel Gruss, Michael Schwarz and Moritz Lipp and that of their doctoral supervisor Stefan Mangard abruptly changed for ever from the ground up. After days of speculation in blogs, on social media and in the press one thing was sure: the discovery of the Spectre and Meltdown computer attacks put the IT world into shock and propelled the international team that had discovered the loopholes – including the four researchers from Graz – all of a sudden into the limelight. Malware like this the IT world had not seen before, and many weeks went by during which the big chip producers were searching intensively for solutions. Weeks in which Gruss, Schwarz, Lipp and Mangard had to answer questions from the media almost every minute of their working day and give interviews.

What does it feel like to turn the tech world upside down? ‘Everything’s fine with us,’ laughs Daniel Gruss, sitting in his black office chair in the Graz Inffeldgasse – unusual for him since he’s normally jetting around the world talking about processor loopholes and hacker attacks. ‘The media fuss has meanwhile settled down. But we’re still being invited to talks or conferences each month to talk about our work. 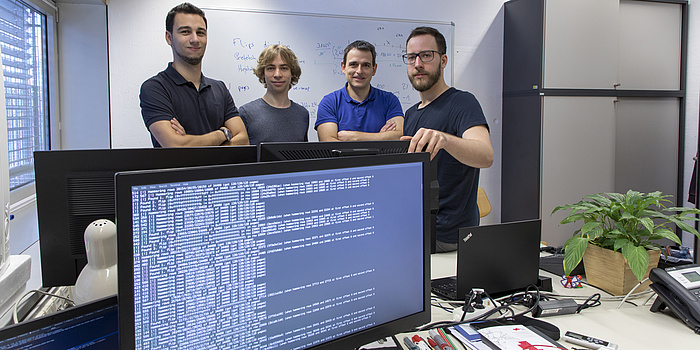 The 32-year-old has a stash of chocolate bars next to his screen – energy for intensive working days. The screen itself is all in black. An apparent characteristic of IT pros. ‘The black background is easier on the eyes and you don’t get tired so fast,’ explains Gruss with a grin. He has recently completed his doctoral thesis on the topic ‘Software-based micro-architectural attacks’. And he has picked up several prizes with this thesis: the ACM SIGSAC Doctoral Dissertation Award for outstanding PhD theses in Computer and Information Security 2017, the ‘GI-Dissertationspreis’ for the best PhD thesis in computer science in German-speaking countries 2017, the Forum of Technology and Society (Graz University of Technology) Award for the best PhD thesis with particular Societal Relevance 2017, and the Heinz Zemanek Award for the best PhD thesis in Computer Science in Austria 2016/2017.

Another focus of Gross’s work is on Rowhammer attacks, which exploit hardware vulnerabilities to be able to penetrate computer systems.

The discovery of Spectre and Meltdown came at the right moment for Daniel Gruss – just as he was looking around for a permanent job at a university. ‘After the paper was published, I got many wonderful offers from all over the world,’ he explains, delighted with all the many possibilities. Eventually Gruss decided in favour of TU Graz again. Since 1st October, he has been working as assistant professor at the Institute of Applied Information Processing and Communication Technology. ‘The work atmosphere is great and the team is unique,’ he says, justifying his decision. ‘I had the opportunity for a long time to help shape teaching actively and to prepare students for the topics we are working on. So today we’ve got great students who, on the one hand, can support us directly in our work, and on the other hand, can play a part in cutting-edge research and publishing.’

The career of the native-born German is itself very impressive, and if you look at his education he gains added depths.
The young researcher with the blond curls was born in the vicinity of the German city of Cologne. His parents, who did not have an academic background themselves, supported the educational wishes of their son. ‘As a child, along with my father I repaired discarded computers and sold them on flea markets,’ says Gruss, recounting his first contacts with the subject that would accompany him in later life. ‘I found it fascinating, and I knew very early on that that was my future.’ Like many children, Gruss also played a lot computer games and developed his first career plans: ‘Like many people who want to start a career in computer science, I wanted to become a computer-games developer at first,’ he explains. ‘Programming gave me a lot of pleasure at a basic level: you write down what you want to happen in a very structured way, and the computer carries it for you. It’s like what you always wanted as a child: to say “tidy my room up” and it happens. I didn’t quite manage it with my room, but my first program at least put my MP3 collection in order,’ he adds, smiling.

You write down what you want to happen in a very structured way, and the computer carries it for you. It’s like what you always wanted as a child: to say “tidy my room up” and it happens. I didn’t quite manage it with my room, but my first program at least put my MP3 collection in order.“ 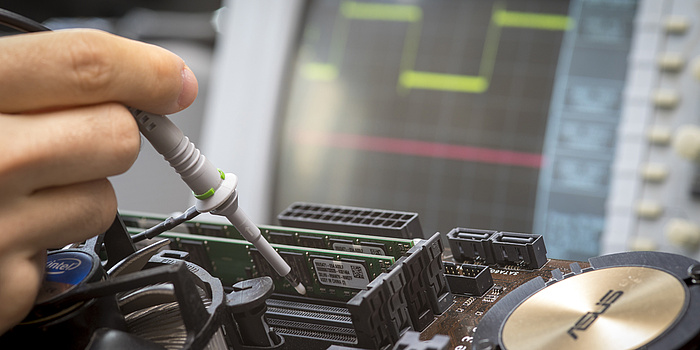 For the teenager, school was a necessary evil on the path to his dream job in computer science: ‘I was never good at school, only did the bare minimum and got corresponding grades and missed classes. More than once he heard at the job centre that he wouldn’t pass the Abitur (university entrance exams) and he ought to do a training course which would at least bring him a salary. His teachers and even his family were sceptical. But he didn’t let it deter him from his dream: ‘I knew I had to pass the Abitur in order to do what really interested me.’ Along with his girlfriend who had already begun studying computer science at TU Graz, he attended his first lectures and was fascinated right from the beginning: ‘I knew straightaway that I felt at home in this study programme.’ And from one day to the next he changed the pace of his work from doing ‘the bare minimum’ at school to ‘as much as possible’ at university. ‘At that time I did more than 30 ECTS credits per semester. I advise everyone starting their studies to invest sufficient time in going to lectures at the beginning. In this way you create a solid basis on which you can tackle really interesting problems later.’ On top of this, Gruss served as a tutor and invested a lot of time in teaching right from the beginning. ‘I often got feedback that I was being too strict and looking at things too exactly. But I wanted to do everything as well as possible,’ he says. ‘I know much better today what kind of help I can give the students, and how to communicate the requirements demanded of them.’ Learning that pays off: today, the courses of Daniel Gruss, Michael Schwarz and Moritz Lipp are very popular and recommended among the students. In 2018 Daniel Gruss was nominated for an excellence in teaching prize which will be awarded in November.

Gruss offers the following advice to young people interested in a life in computer science like his: ‘Find something that you’re really enthusiastic about and want to do the whole day long. I don’t believe I would’ve been successful in a different study programme. But computer science simply inspired me.’ 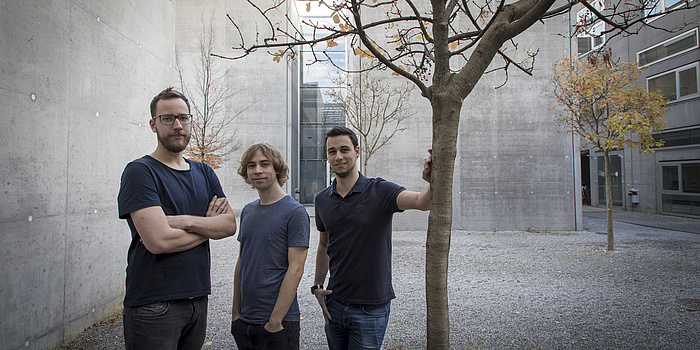 Moritz Lipp, Daniel Gruss and Michael Schwarz in front of their office in Graz's Inffeldgasse.

While Daniel Gruss has been talking, the shared office has filled up. Together with Michael Schwarz and Moritz Lipp, Daniel Gruss will continue to work on the big security issues occupying the IT world. ‘The field is becoming increasingly wide. The challenge now is to build a structure and develop a common language,’ he says. ‘We are surprised ourselves at all the things that have developed out of our discovery. But it’s great to be right at the front when a new research field is emerging.’

Meltdown and Spectre are just a few lines of malicious code which use the basic mode of operation of computer chips to allow attackers access to the computer system and leak sensitive data, like passwords. Information website on both kinds of attack: https://spectreattack.com/
The work was funded by the Sophia ERC project at the Institute of Applied Information Processing and Communication Technology which is headed by Stefan Mangard.