The Combustion Engine in the Sustainable Mobility Mix

Fossil combustion engines are generally considered to be less environmentally friendly, as they are responsible for a large proportion of transport-related CO₂ emissions. Helmut Eichlseder, explains why the internal combustion engine cannot be missing from the sustainable mobility mix. 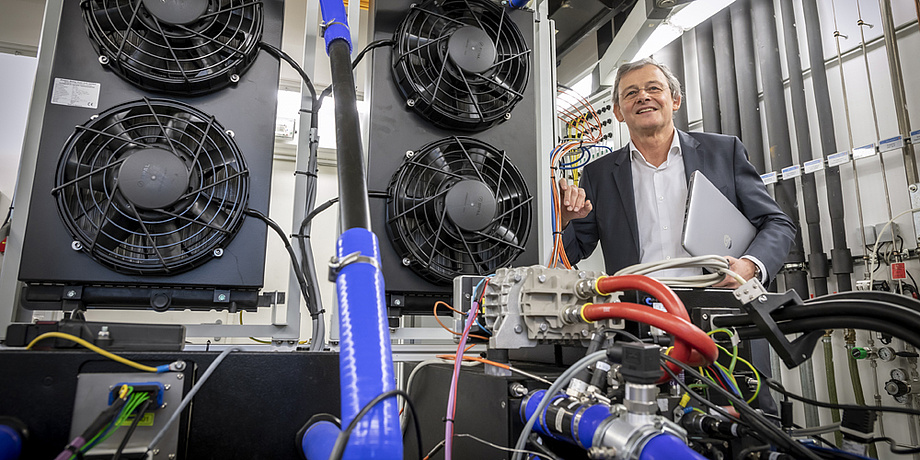 "Internal combustion engines have been more or less written off in the court of public opinion," explains Helmut Eichlseder, casually crossing his legs as he sits at the head of his conference table in Inffeldgasse in Graz. His office is on the third floor of a gleaming white new building in the middle of Campus Inffeldgasse – three floors above the engine test benches for which the Institute of Internal Combustion Engines and Thermodynamics is known, among other things. The man with the brown-grey waves of hair has now been head of the Institute for 20 years and has decisively pushed the Institute's path towards sustainable mobility. Today, researchers are primarily concerned with sustainable forms of mobility, conducting research on fuel cells as vehicle propulsion, hydrogen as fuel in combustion engines and e-fuels as an alternative in conventional engines. In addition to drive technology, pollutant emissions and the environmental impact of transport systems, the focus is also on the topic of thermal management and thermodynamic systems. "In the case of refrigerators, for example, the respective optimization potential is no longer very high. But with the amount of refrigeration equipment that exists worldwide, even a one percent reduction in consumption has a huge impact," says Eichlseder.

In the case of refrigerators, for example, the respective optimization potential is no longer very high. But with the amount of refrigeration equipment that exists worldwide, even a one percent reduction in consumption has a huge impact.

"In the long term, of course, the goal must be to use only renewable energies," says Eichlseder, and he sees three possible ways to achieve this in mobility. As a first option, sustainably generated electricity can be fed directly into vehicles and converted. "This is the most efficient way, but unfortunately it cannot be implemented continuously for many applications and on the supply side due to the influence of the weather, the day-night rhythm and, above all, the course of the year." For this reason, the energy would have to be stored in times of surplus – something which is simply not feasible to the necessary degree by means of batteries. "Electrically powered vehicles are a wonderful option in inner-city areas," says Eichlseder. "But they reach their limits in heavy traffic, in shipping or in remote areas with poor infrastructure." Here he sees above all the advantages of hydrogen, which can be produced via electrolysis from sustainably provided energy, transported in gaseous or liquid form and then used on site in fuel cells or internal combustion engines. "I brought this topic with me to the Institute 20 years ago from my industrial employer at the time." A visible sign of these efforts is HyCentA, founded in 2005 in the immediate vicinity of the Institute. Austria's first and so far only hydrogen competence centre contains the first ever Austrian hydrogen filling station and is also the place where the first hydrogen vehicle to be granted road approval in this country – the HyCar – was developed.

The third option is e-fuels, which Eichlseder sees as an important addition to the fuel mix and as an essential way to achieve the climate targets.

E-fuels are sustainably produced fuels that could be easily and, above all, very safely transported, used in conventional combustion engines and distributed using the current filling-station infrastructure. "They are not only interesting for long-distance and heavy-duty transport, but can also, above all, make the existing vehicle fleet more environmentally friendly in a backward-compatible way," explains Eichlseder. "After all, even if we give a first-time registration to the last combustion engines in 2035, there will still be millions of fossil-fuelled vehicles on the road in the decades after that."

E-Fuels are not only interesting for long-distance and heavy-duty transport, but can also, above all, make the existing vehicle fleet more environmentally friendly in a backward-compatible way.

E-fuels are obtained when the previously sustainably produced hydrogen is processed with CO2. They can therefore be produced sustainably, but are not completely emission-free when used in the engine. "But it is an important step towards retroactively reducing the influence of fossil fuels. At present, the main obstacle to e-fuels is the necessary capital expenditure for the production plants. For distribution, the costs are ultimately manageable because the existing filling station network could be used." Current legislation puts such fuels at a disadvantage. Emissions are only taken into account tank-to-wheel – i.e. regardless of how the fuel is obtained. This means that electricity is emission-free by definition – even if it is generated with coal. And all fuels used in a combustion engine are by definition harmful to the environment – just like e-fuels," says Eichlseder, explaining the current situation and why both the oil industry and vehicle manufacturers have little incentive to back e-fuels.

At any rate, the Institute is carrying out intensive research on which adaptations a comprehensive use of e-fuels would require in order to make fact-based decisions possible. "A lot of decisions are made on the basis of ideology. I would very much like us to listen more to facts in this area and for there to be more openness to technology so that the appropriate technology would be used for the respective intended use rather than dogmatically advancing one system." 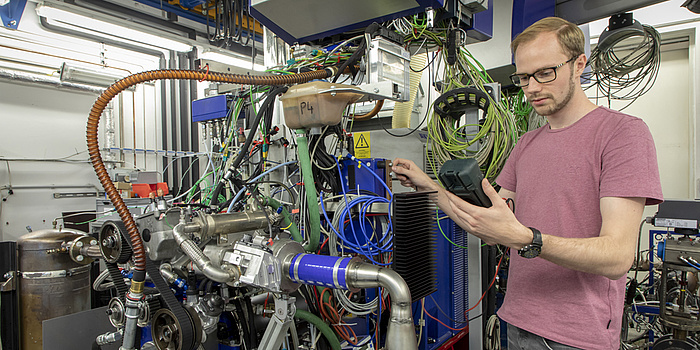 From small engines to fuel cells and large engines, all types of drives can be tested on the 12 test benches. © Lunghammer – TU Graz

For several decades, employees of the Institute have also been involved in emission measurements and tunnel ventilation. The most prominent example is the Graz method for measuring pollutants in real driving conditions (today: RDE - Real Drive Emissions), which was developed 40 years ago. Where exhaust gases were captured and transported to the laboratory for testing back then, researchers now use sophisticated on-board sensor technology in vehicles. This allows the researchers to measure and verify their laboratory results live.

In the area of simulation, a team led by Peter Sturm creates pollutant dispersion calculations that show particularly polluted areas in cities or are also extremely important for tunnel ventilation. And at the Institute, Stefan Hausberger developed a simulation method that is now the basis for the certification of heavy goods vehicles throughout the EU.

A number of competence centres have emerged from the Institute of Internal Combustion Engines and Thermodynamics over its long history. For example, it participated in the founding of the large engine research centre LEC as well as the hydrogen competence centre HyCentA and the vehicle simulation centre ViF. There are various joint research projects with all centres and a lively exchange of scientific work and expertise.

The Institute of Internal Combustion Engines and Thermodynamics currently operates 12 drive test rigs on which all conceivable types of engine can be tested, from drive units with a fuel cell to an internal combustion engine to a hybrid system and from small engines in chain saws, for example, to propulsion systems for e-bikes and small cars to trucks and large engines. "A special feature that is unique in the European university landscape is the large roller test rig on which we can even test an entire truck or bus," Eichlseder tells us with not quite completely hidden pride in his voice. This test rig, which is located one building away, is currently being adapted to be able to test hydrogen-powered trucks and buses in the future. "We are equipped for all forms of mobility," Eichlseder explains and even touches on initial ideas for testing hydrogen-powered railcars. 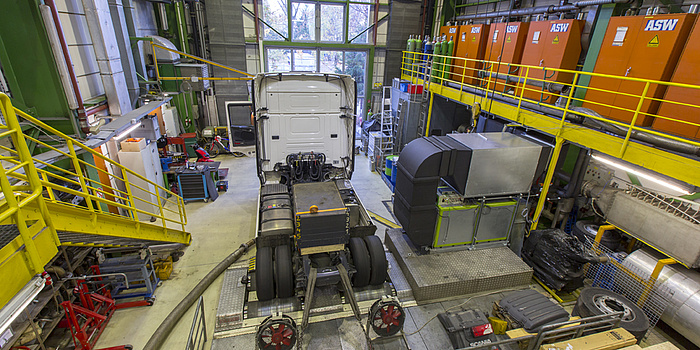 The large test stand, where entire trucks can be tested, is currently being rebuilt. Soon, hydrogen-powered trucks and buses will also be researched there. © Lunghammer – TU Graz

A sustainable future with combustion engines and fuel cells

In this way, the researchers at the Institute of Internal Combustion Engines and Thermodynamics are working on a sustainable mobility future and making an important contribution to rendering the ambitious but all the more important climate goals achievable. At the same time, the 100th anniversary of the Institute was celebrated last year. Due to corona, an actual celebration had to be cancelled, but that will be made up for soon. "I also have my own anniversary to celebrate this year," smiles Eichlseder "I returned to the Institute 20 years ago as head." So there is much to celebrate at the Institute, but also all the more to research.

The biennial conference of the Institute will take place this year for the 18th time – but with an interesting change. Previously organized under the title "The Working Process of the Combustion Engine", the new name "Sustainability in Mobility, Transport and Energy Production" indicates a new thematic focus that has become established in recent years, and not only at the Institute.