Batteries are a broad field of research. Energy storage systems of the future should be more powerful, more environmentally friendly, smaller and even safer – work is being done on this at TU Graz. 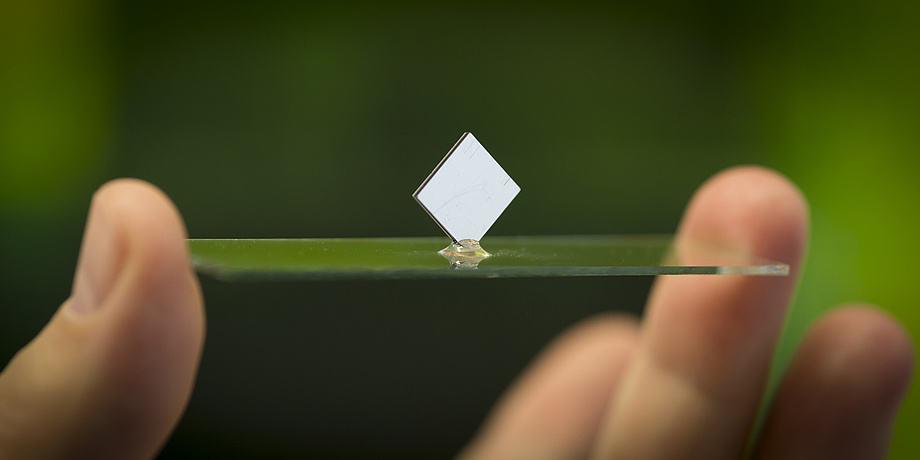 Batteries are many things: cylindrical metal capsules with a plus sign at the top and a minus sign at the bottom, small black packs in our mobile phones, silver buttons in all possible sizes, invisibly integrated in our electric toothbrushes or flat and stacked up in a row in our e-vehicles. But primarily batteries are energy storage systems which are becoming increasingly important, especially in these times of e-mobility and the Internet of Things. After all, it’s not just the devices that we know from our daily lives that need electricity. Energy supply is becoming increasingly important – in microchips, medical applications and sensor technology. Requirements are varied. Whereas batteries in e-mobility will have to become primarily safer and more powerful, power supply systems in the field of the Internet of Things have to become smaller, more autonomous and, above all, more flexible. Just think of diagnostic systems, for example, which have to be applied on the skin or even swallowed and from there transmit data autonomously to the doctor.

Many researchers at TU Graz are working on the optimisation and further development of energy storage systems. One of the main researchers is Martin Wilkening. Not only does he head the Institute for Chemistry and Technology of Materials, but he also founded the Christian Doppler Lab for Lithium Batteries in 2012 and has led it ever since. ‘E-mobility is currently a much discussed topic – because it’s a kind of mobility that seems to do away with emissions entirely,’ says Wilkening. ‘But this is not strictly so, because you always have to look at the complete life-cycle of a battery: its production, use, service life, “afterlife” and recycling possibilities. You have to look at all of this when you talk about batteries.’

You always have to look at the complete life-cycle of a battery: its production, use, service life, “afterlife” and recycling possibilities. You have to look at all of this when you talk about batteries..

His institute is one of the biggest at TU Graz – by area alone it takes up half of the new chemistry building in Stremayrgasse 9. Here, in addition to offices, a large number of laboratories with a variety of active research projects are accommodated. ‘We’re starting right at the beginning here. We take apart batteries, examine them, put our own batteries back together and do comprehensive tests. We deal with a very wide range of battery-specific research from material design and ageing processes to optimum construction and safety aspects as well as possibilities of re-use,’ says the professor, illustrating the range of battery-driven research at Graz. As a physico and electro-chemist, he likes to look at things from the inside. He investigates transport phenomena of the lithium charge carrier in materials using various spectroscopic methods, and examines how a great variety of materials can optimally work together.

How does a battery work? What does it look like from the inside? The team of the Institute of Chemical Technology of Materials shows it in this video (english subtitles).

In the CD lab, which was founded in 2012, people are looking primarily at the material side, searching for new concepts of lithium batteries and carrying out research on influencing factors which have an affect on their service life and power. ‘By researching these fundamental processes, we have a scientific basis to continue improving service life, power and safety of the energy storage systems,’ explains Wilkening.

One of the chief topics is the size of batteries, and how one can keep them as small as possible. ‘Just imagine, you go to a hospital and are given a thermometer sensor which is stuck on with a plaster, this measures your temperature and other values constantly – obviously, here, very small batteries with sufficient transmission power have to be used. Or take the aircraft industry, which needs small, wireless and lightweight sensors for the blanket monitoring of the aircraft. The batteries not only have to be powerful, but also resistant to very low temperatures,’ explains Wilkening. 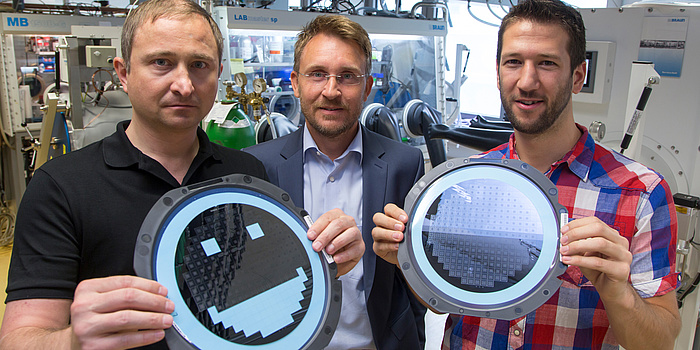 In August 2016, the CD-lab team achieved a major success. The researchers showed how single-crystalline silicon could be used directly as a battery electrode – in other words, as an anode. And what was so great about this discovery? Single-crystalline silicon is the material of which microchips are made. This means that microchips not only contain electronics, but also the most important component of a mini battery by which they can supply themselves with electricity. This development makes possible an integrated energy supply on microchips using a rechargeable battery of only a few millimetres in size. This has a performance capacity which can compete with today’s best obtainable lithium-ion battery systems.

Stefan Freunberger deals specifically with the power of batteries and his scientific career also began in the laboratories of the Institute for Chemistry and Technology of Materials. In 2014 he was able to pick up one of the prestigious ERC Starting Grants for his work, and since then he has been carrying out research in his own OMICON project, among others, on high-performance batteries and a novel concept of an organic mixed ion-electron conductor. The aim of this research is to develop ‘super batteries’ for use in electrically powered vehicles. Most recently, Freunberger made people sit up and take notice with a number of articles published in the well-known journals Nature Energy and Angewandte Chemie (Applied Chemistry).

Non-water lithium-oxygen batteries are being bandied around as a possible successor to the usual lithium-ion battery today because their energy density is so much greater. Lithium-air batteries use the reaction between oxygen and lithium, sodium or magnesium to release electrical energy. Their current biggest disadvantage is their extremely fast ageing process. Stefan Freunberger was able to prove that singlet oxygen originated in this energy production process; up till then it could only be detected with difficulty in battery systems. An important detail is that singlet oxygen exerts a strong influence on battery ageing. ‘From the viewpoint of research this is a veritable goldmine. It has been shown that singlet oxygen can be of importance in electrochemistry where oxygen is involved – and that is in most areas of battery chemistry. The methods used to detect singlet oxygen are now being applied on other fronts,’ says the researcher. 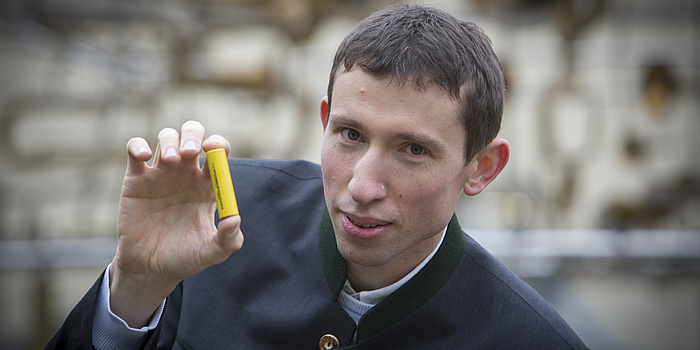 On top of this, Freunberger and his team at the same time provided an initial solution approach to extend the service life of batteries electrochemically. ‘Essentially, this requires the function of the enzyme superoxide dismutase in the battery. We were able to identify a class of molecules which can fulfil this function. Now we have to find a suitable way of “smuggling” the “enzyme” into the battery system, either by means of the electrolyte itself or by using an additive which can be dissolved in the electrolyte. This is an initial approach, and it works, but it is definitely not yet optimal. Behind this big door which we were able to open is a huge amount of work.’ He was elected a member of the Austrian Academy of Sciences in 2017 for his successful research, and received the Tajima Prize of the International Society of Electrochemistry in 2018.

From the viewpoint of research this is a veritable goldmine. It has been shown that singlet oxygen can be of importance in electrochemistry where oxygen is involved – and that is in most areas of battery chemistry.

Safe along the whole life-cycle

Especially in electromobility, which is one of the most important fields of application of new battery systems, further developments in the field of safety – in addition to power – are of great interest. ‘In terms of safety, vehicle manufacturers prefer to protect battery components more than is absolutely necessary in order to be on the safe side. In doing so, there are, conversely, certain restrictions regarding weight, type of construction and power,’ explain Wolfgang Sinz and Christian Ellersdorfer from the Institute of Vehicle Safety. Together with the Institute for Chemistry and Technology of Materials, they are carrying out research in the Austrian Research Promotion Agency’s COMET project SafeBattery, looking at how stresses in the course of the life of a battery affect the safety of lithium-ion storage systems. ‘The behaviour of battery components under crash load has been researched far too little. Currently known studies restrict themselves mostly to the behaviour of new vehicle batteries, without for instance taking into account the possible influence of previous stresses, such as ageing.’

In terms of safety, vehicle manufacturers prefer to protect battery components more than is absolutely necessary in order to be on the safe side. In doing so, there are, conversely, certain restrictions regarding weight, type of construction and power.

At the centre of research interest are the mechanical, electrochemical and chemical thermodynamic behaviour of lithium-based single cells and single modules under crash load conditions. The behaviour of batteries with different histories and thus with possibly different reactive behaviour in the case of an accident is being examined. ‘Safety has to be insured not only with new batteries, but also with vehicles which have already undergone a certain degree of vibration, mechanical stresses – such as small accidents – or have endured a certain a calendrical ageing,’ says Sinz. 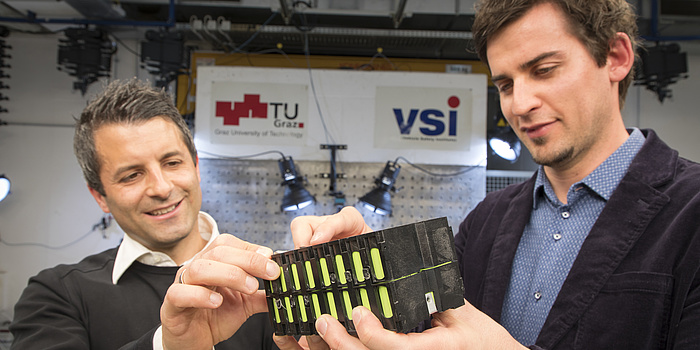 But not only is the current state of the battery considered – attention is also paid to other factors such as charge state and operating temperature. The aim is to sound out the boundaries of batteries and, subsequently, to define parameters under which batteries can be safely used. On top of this, research is not only being performed on the currently usual lithium batteries, but also on the next generation, as Since reveals: ‘What interests us is whether the coming generation of drive batteries no longer have the usual drawbacks of the current systems, but perhaps have other vulnerabilities.

The safety aspect and increasing power capacity will play a bigger role in research in the future, predicts Martin Wilkening: ‘Safety and high energy density as well as the development of sustainable and eco-friendly batteries are the goals for the next few years.’ Battery research at TU Graz is broadly diversified and will continue to be so in the future. The described fields of research are just a small detail of what is happening in the labs and workshops of Graz University of Technology.