In search of the foundations of discrete mathematics

Oswin Aichholzer does basic research – he doesn’t invent, he discovers. The theoretical computer scientist is on the trail of basic mathematical rules which he can model and teach the computer. 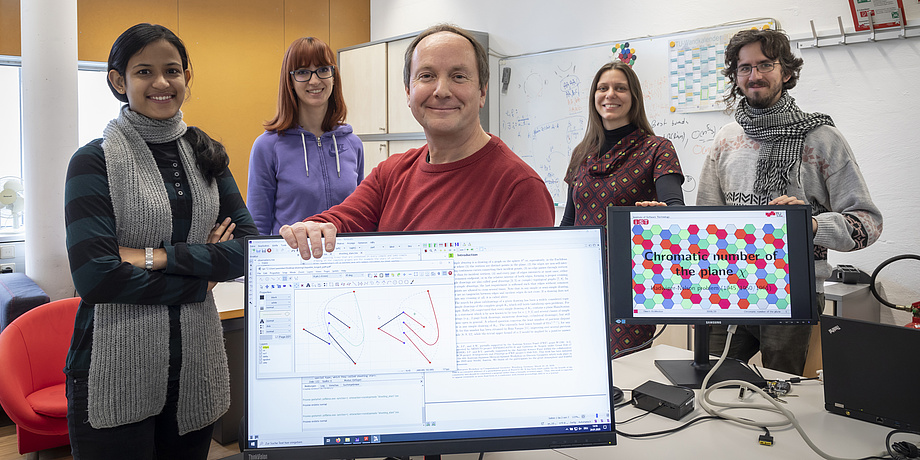 Oswin Aichholzer with his working group at the beginning of the year in the office rooms. © Lunghammer – TU Graz

Oswin Aichholzer is wearing a light blue pullover, has a headset on, and is sitting in front of the computer. The theoretical computer scientist has it easier than many of his colleagues who depend on a laboratory or workshop. Aichholzers "laboratory" consists of a sheet of paper, a pencil and a laptop. This allows him to work from anywhere. Behind him a wooden shelf stretches up to the ceiling. Board games are piled up on the brown floor. Box on box. All of them logic and strategy games. Logic, mathematical puzzles and creativity have accompanied the scientist all his life. And in the current unusual situation he is more than ever dependent on them. "Our profession sounds so strict, but it's not at all. I need a lot of intuition and creativity – the best things develop when I’m going for a walk or chatting in a café. Personal contact is diminishing now – one feels more restricted in thinking."

We don't invent, we discover.

Oswin Aichholzer heads the working group "Discrete and Computational Geometry" at the Institute of Software Technology at TU Graz. His fascinating field of research lies between mathematics and computer science and is concerned with the exploration of geometric algorithms. "We are dealing with structural relationships in nature that were already valid 1,000 years ago and will still be valid in 1,000 years' time," said Aichholzer, explaining his research. "We don't invent anything here. We discover things. This has something very calming in the otherwise short-lived world of computer science."

If curves are suddenly allowed

His research group deals with fundamental mathematical and geometrical problems, which they model and teach to a computer via suitable algorithms. The basic situation is a geometrical problem – in Oswin Aichberger's case, for example, a certain number of points for which there is a fixed number of ways to arrange them. "We would now like to connect each of these points with each other and use straight lines to do so," says Aichholzer. "In doing so, we try to keep crossover points to a minimum." What sounds trivial is, on closer inspection, a complex problem for a computer. If new points are added, the calculation effort increases exponentially. "With straight lines, it's easy. I can describe them exactly and the computer understands. But if I now allow all kinds of lines – including curves, for example – then it becomes complex." This problem has to be framed into suitable algorithms that computer systems can process. Or as the researcher describes it: "We take a mathematical problem and open our computer science heart to make it understandable to the computer."

From basis to application

At first glance, the direct benefit of basic research is hard to fathom. "However, basic research is the foundation of all further developments," says the researcher, who illustrates this using the example of computer science. "After their initial discovery, semiconductor materials seemed to be useless – they neither conducted electricity well nor provided a good insulator. But if curious people hadn't paid close attention, we would lack the basis for today's computer systems."

This problem is familiar to Aichholzer and borne out from his own experience: Researchers at the US elite university MIT used his findings to solve well-known basic problems in origami theory. This theory deals with folding and is used, for example, to fold stents. Stents are inserted into human blood vessels to keep them open. Today, they are inserted into the body in folded-up form in a minimally invasive way, and unfold again only at the desired location in the body.

At the same time, Aichholzer's findings were also used by Canadian researchers who model mountain and river landscapes and calculate water runoff after rainfall.

And then he comes back to the beginning – to creativity: "In Graz we are in the comfortable situation of having very few students in the theory lectures, but those who are there are very talented. Many of them take our research much further with their questions during their studies; some of them we can keep at the institute."

Then the interview is over and the scientist says goodbye: "How do we say it these days? Stay well!"

This research area is anchored in the Field of Expertise “Information, Communication & Computing”, one of five strategic foci of TU Graz
You can find more research news on Planet research. Monthly updates from the world of science at Graz University of Technology are available via the research newsletter TU Graz research monthly.