The absorption of energy from laser light by free electrons in a liquid has been demonstrated for the first time. Until now, this process was observed only in the gas phase. The findings, led by Graz University of Technology, open new doors for ultra-fast electron microscopy. 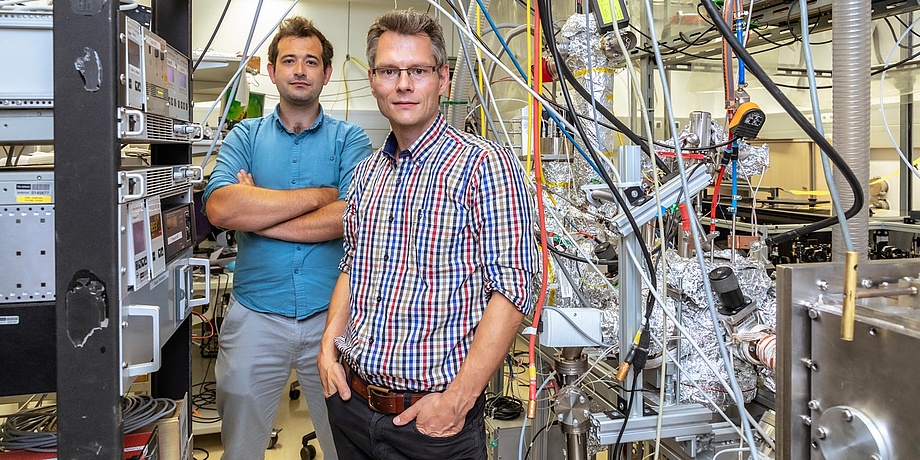 The investigation and development of materials crucially depends on the ability to observe smallest objects at fastest time scales. The necessary spatial resolution for investigations in the (sub-)atomic range can be achieved with electron microscopy. For the most rapid processes, however, proceeding within a few femtoseconds (quadrillionths of a second), the time resolution of conventional electron microscopes is insufficient. To improve the time duration of electron pulses, electrons would have to be selected within a shorter time window – in analogy to a camera shutter, which controls the exposure time in photography.

In principle, this temporal selection is possible with extremely short laser pulses through a process called laser-assisted electron scattering (LAES). In this process, electrons can absorb energy from the light field during collisions with atoms of the sample under investigation. "Structural information is provided by all electrons, but those that have a higher energy level can be assigned to the time window in which the light pulse was present. With this method, it is possible to select a short time window from the long electron pulse and thus improve the time resolution," explains Markus Koch, professor at the Institute of Experimental Physics at Graz University of Technology. So far, however, LAES processes have only been observed in the gas phase, despite their investigation for about 50 years.

Markus Koch and his team, in collaboration with researchers from Photonics Institute at Vienna University of Technology and the Institute of Chemistry at Tokyo Metropolitan University, have now demonstrated for the first time that laser-assisted electron scattering can also be observed in condensed matter, specifically in superfluid helium.

The TU Graz researchers performed the experiment in a superfluid helium droplet of few nanometer diameter (3-30 nm), into which they loaded single atoms (indium or xenon) or molecules (acetone) that served as an electron source – a field of expertise at the institute. "The free electrons can move almost without friction within the droplet and absorb more energy in the light field than they lose in collisions with the helium atoms," says Leonhard Treiber, the PhD student in charge of the experiment. The resulting acceleration allows for the observation of much faster electrons.

The experiments could be interpreted in cooperation with Markus Kitzler-Zeiler, an expert for strong-field processes at TU Wien, and the LAES process was confirmed through simulations by Reika Kanya from Tokyo Metropolitan University. The results were published in Nature Communications.

In the future, the LAES process will be studied within thin films of various materials, also produced inside helium droplets, in order to determine important parameters such as the optimal film thickness or the favourable intensity of the laser pulses for application in an electron microscope.

This research project was funded by an Austrian Science Fund project and is anchored in the Field of Expertise "Advanced Materials Science" , one of five strategic focus areas of TU Graz. Participating researchers are members of NAWI Graz Physics. 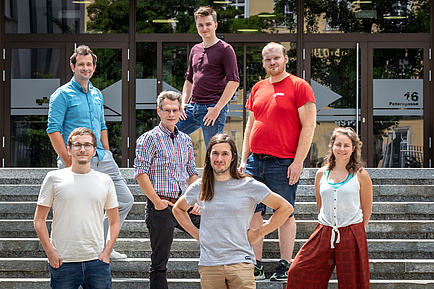 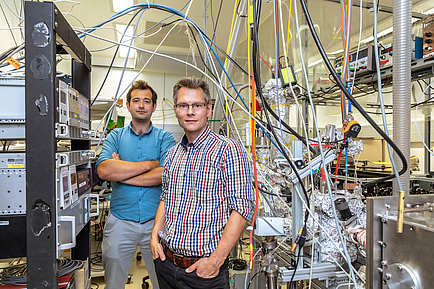 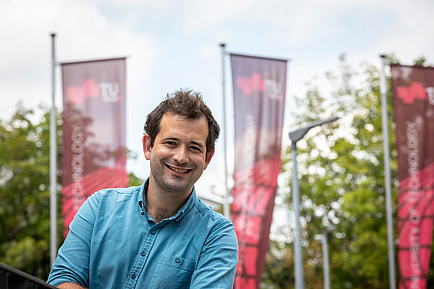 Was significantly involved in the new discovery: Leonhard Treiber, PhD student at the Institute of Experimental Physics at TU Graz. © Lunghammer – TU Graz 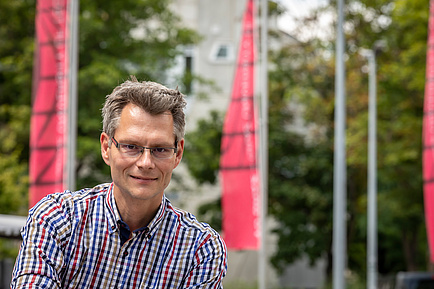 Markus Koch and his team of the research group Femtosecond Dynamics at the Institute of Experimental Physics at TU Graz investigate how light interacts with matter. © Lunghammer – TU Graz 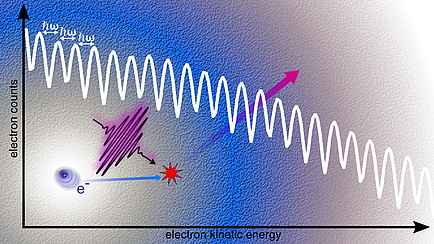 Schematic representation of a LAES process in superfluid helium: The electron collides with the material sample (red star), thereby absorbing energy from the light field and changing its direction. © IEP – TU Graz