Curiosity, dedication and a big portion of luck

Anna Eibel, Maria Eichlseder, Peter Peßl and Robert Triebl achieved consistently top grades from the upper school to their doctorates. Because of this achievement, the Federal President himself came to the doctoral graduation ceremony at TU Graz. 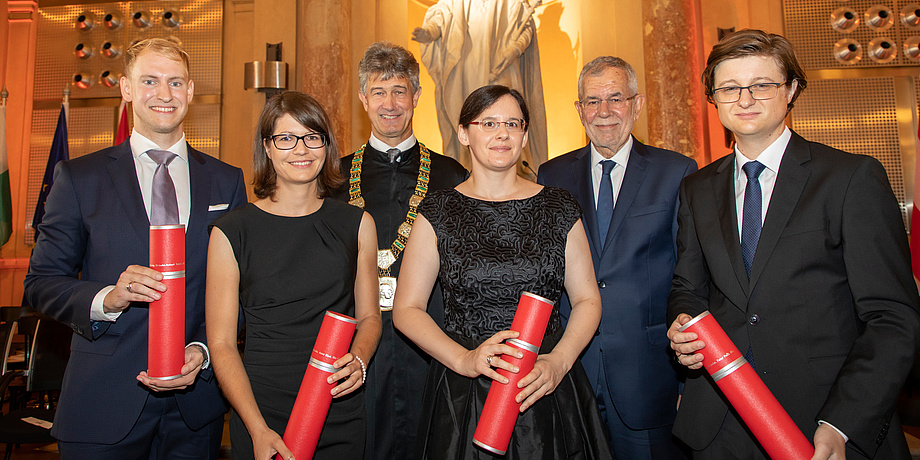 They were all awarded their doctorates at Graz University of Technology (TU Graz) sub auspiciis Praesidentis rei publicae – in other words “under the auspices” of the Federal President. But let’s go back one step: why did you choose to study at TU Graz?

Triebl: Maths was my favourite subject at school, I took part in the Mathematical Olympiad over many years. In my final school year, I found the use of mathematics in physics more fun than just pure mathematics. That’s why I decided to do bachelor’s, master’s and doctoral study programmes in Technical Physics at TU Graz. Because of the joy of mathematics, however, I dealt mainly with theoretical subjects.

Peßl: I’ve always been fascinated by all things computers and it was clear that I wanted to do something with it. Even before I could read, I wrote down the command to launch windows and happily played around on my parents’ PC. Later, purely pragmatically, TU Graz was the next option for studying IT. I decided to do Telematics for my bachelor’s and master’s programmes, and then Computer Science for my doctoral programme. The Telematics study programme at TU Graz today runs under the name of Information and Computer Engineering.

Eibel: I already knew TU Graz through a summer placement in the FIT (women into technology) programme. To me it was obvious that I wanted to study in Graz because the city was close to my home town. At school I was originally interested in many things, especially mathematics, physics and astronomy. I came to chemistry almost just by chance. When I was studying for my “Matura” (Austrian matriculation exam), I noticed that I found the subject a lot of fun. After doing a bachelor’s degree in Chemistry, I then completed two master’s degrees at TU Graz in Chemistry and in Advanced Materials Science.

A big question for less successful students: consistently top grades – how do you manage that? Did you deliberately work towards the sub auspiciis doctoral graduation?

Triebl: Prerequisites include a supportive family, good friendships and financial security during the complete study period. Looking back, the course at the Mathematical Olympiad, which I attended for the first time when I was 12, was very helpful. Many good school students begin to have doubts when they’re sitting in the lecture room at university and don’t understand a word. I was very familiar with this situation from the preparation courses for the Mathematical Olympiad. I knew I could understand a lot when I could calmly think about it afterwards and discuss it with other students. When I got my first “excellent” grade at the beginning of my studies, the sub auspiciis doctoral graduation, which I had already heard about at school, became my aim. To get excellent grades, I always studied long enough until I had understood the most important points. A piece of advice I would give to school and university students would be this: It’s better to study in a way where you understand the content than to study just to get good grades. In this way you can always build on a solid basis.

Eichlseder: I had a lot of luck with my environment in many places. My family, in particular my parents, always believed in me but never pushed me to do anything. It was also no disadvantage that I was so interested in so much at school and that I found two fields of study at university that inspired me so much and broadened my intellectual horizon. Last but not least, I ended up in a brilliant group during my doctoral studies, in the middle of an exciting, challenging and effective field of research. I didn’t deliberately work towards a sub auspiciis doctoral graduation. But of course it was important for me to get myself absorbed in the content and give my best in my studies.

Eibel: I was aware of the sub auspiciis doctoral graduation from an early age, and I did ask myself the question whether I could do it. I saw the whole thing like a sport. I just wanted to get the best out of it and create an achievement which I myself was happy with – all in all I enjoyed studying and learning a lot. I don’t think you can deliberately plan for a sub auspiciis doctoral graduation since this plan can fail in one single examination.

How easy or difficult did you find this achievement? Were there any particularly difficult hurdles?

Triebl: Even though I always prepared myself for examinations very intensively, I never knew everything. The biggest hurdles for me were business economics and electronics. But even in the subjects I liked very much, I only just achieved the better grade. Is that the luck of the brave? No. I’ve spent enough time in my studies grappling with statistics and probability theory to know that it was just pure luck.

Peßl: The bigger hurdles for me were the final papers. Or to put it more accurately, finishing the final papers (laughs). That happens to a lot of people, as I can see among my bachelor’s and master’s students.

Eichlseder: The most difficult hurdle for me was time. There were simply too many things which inspired me and which I wanted to pursue by the way. This of course restricted my time for my computer science studies.

Eibel: I would say that, overall, the achievement wasn’t particularly difficult. Sometimes I came up against my limits in my studies – especially as I took almost every exam at the earliest possible date. That was part of the challenge for me. The advantage was that – apart from a few weeks for the summer placement – I always had “proper” summer holidays.

In retrospect, what were your studies like at TU Graz?

Peßl: Looking back, my student days at TU Graz were very nice. My master’s and doctoral degrees I especially liked; here you can really follow your own interests.

Eibel: There was a very collegial relationship between the students and the teachers and an excellent cohesion among the students. For me, the study conditions at TU Graz were outstanding.

Triebl: It’s very simple: it was a wonderful time!

The Degree and Certificate Programmes of TU Graz