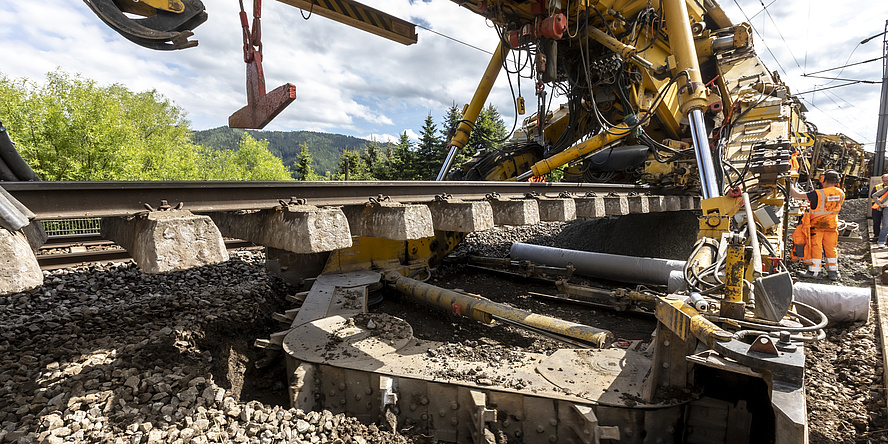 For safe railway operation, tracks must be regularly maintained and renewed. This requires special construction machinery, most of which is nowadays powered by diesel engines. Particularly large track-work machine groups with a length of several hundred metres require up to 1000 litres of diesel per kilometre of track laid and renewed.

Track-work machines are not only noisy and emission-intensive, but also work around the clock and carry out several work steps simultaneously, for example renewing the track or grinding rails. For decades, so-called ballast cleaning machinery has also been used as a standard technology, which on average recycles around 50 percent of the track ballast on site, thus saving valuable resources and preventing material transport in the spirit of the circular economy.

The operation and maintenance of track-work machinery is resource-intensive, while at the same time these specialized vehicles – like everything in the railway industry – are designed for a long service life. “In terms of sustainability, you can’t intervene ad hoc with an innovation and scrap machinery that was only purchased 10 or 15 years ago,” says Matthias Landgraf from the Institute of Railway Engineering and Transport Economy at Graz University of Technology (TU Graz). For this reason, the existing vehicles have to be used as efficiently as possible and in a way that conserves resources.

Together with the world market leader for track-work machinery Plasser & Theurer, the Institute of Railway Engineering and Transport Economy at TU Graz examined all the track-work machinery and its specific modes of operation for the first time and determined the optimal fossil-free alternative drive technology in each case. In addition, the Institute analysed the entire fleet of around 3,000 auxiliary vehicles in Germany as part of a research project of the German Centre for Rail Transport Research (DZSF) in order to develop an optimized migration strategy to alternatively powered machines.

Based on the analysis and the results of a calculation programme developed at TU Graz (CalCAS – calculation of comparison for alternative solutions), recommendations have been made for alternative solutions for different track-work machinery. According to this, a good 35 percent of the machines used could cover their energy requirements electrically via the overhead line from a technical and (labour) legal point of view – “definitely the most energy-efficient solution”, says Landgraf. For track-work machinery with an energy demand of up to 800 kilowatt hours (kWh), the researchers recommend a battery solution as a hybrid with an overhead line for charging. In the medium term, there will also be further developments in the energy sector that could enable the use of pure battery solutions, says Landgraf. For machinery with an electrical energy demand of more than 800 kWh, a drive using hydrogen fuel cell technology is considered optimal. Existing machinery could bridge the gap by using biofuels or synthetic fuels and, in the medium term, liquid hydrogen in combination with an internal combustion engine.

A switch to alternative drive systems would make a direct contribution to reducing greenhouse gas emissions. According to the Institute at TU Graz, track maintenance work produces 9,600 tonnes of CO2 annually in Austria alone. “It can be assumed that this machinery will also be subject to stricter regulations in the future,” says Landgraf. Railway companies are also becoming increasingly aware of the need to reduce negative environmental impacts. The Austrian Federal Railways (ÖBB), Prorail in Holland, Deutsche Bahn and other railway companies do not want to procure any new fossil-fuelled machinery from 2030 at the latest.

Cross between construction, vehicle and rail

Alternative drive technologies are primarily developed for road vehicles. “Track-work machines are also vehicles, but in terms of type they are more like construction machines which travel on rails,” explains Matthias Landgraf. Even if the alternative drives already used to some extent in the construction sector are also suitable for track-work machinery per se, the energy supply infrastructure for alternatively powered track construction machines, for charging traction batteries or refuelling hydrogen tanks, for example, is in turn closely linked to the railway infrastructure itself.

There are many factors that are crucial in the fossil-free future of track work machinery. According to Matthias Landgraf, the findings of the joint study will support the evaluation of alternative drive technologies for track work machinery and the weighing of opportunities and risks. “In the best case, these results will be incorporated into regulations and tender guidelines. This would help track construction equipment manufacturers enormously in rethinking and retooling.” ÖBB Infrastruktur AG has already taken a significant step by procuring 56 alternatively powered maintenance machines from Plasser & Theurer, the first of which will be in use as early as 2023.

A not insignificant adjunct is the fact that fossil-free ancillary vehicles in the railway sector do not only contribute significantly to reducing the railway’s carbon footprint. Electrically powered rail vehicles avoid emissions of nitrogen oxide and particulate matter and, above all, are much quieter – this is a plus especially for people who live along railway lines or work on the machines themselves.

This article is part of the TU Graz dossier "On track: What does tomorrow's railroad need?". Would you like to receive the latest stories, news, research stories, interviews or blog posts from TU Graz directly on your smartphone or in your email inbox? Subscribe to the TU Graz Telegram newsletter free of charge. 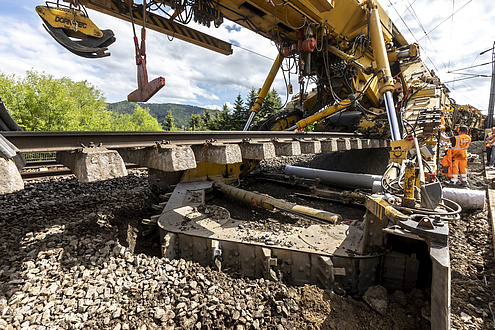 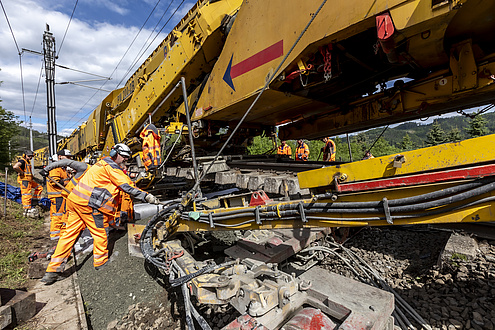 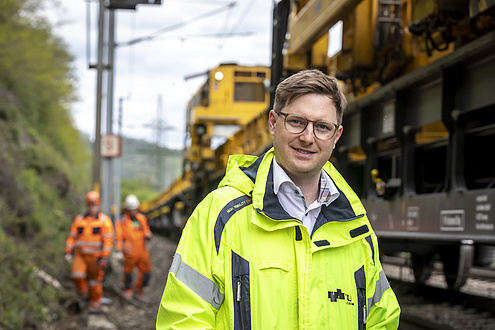