Architecture students at Graz University of Technology have designed a travelling exhibition that reconstructs traces of the resistance to the Nazi regime in Styria on the basis of four case studies. Currently on view in Leoben, then in Graz and Eisenerz. 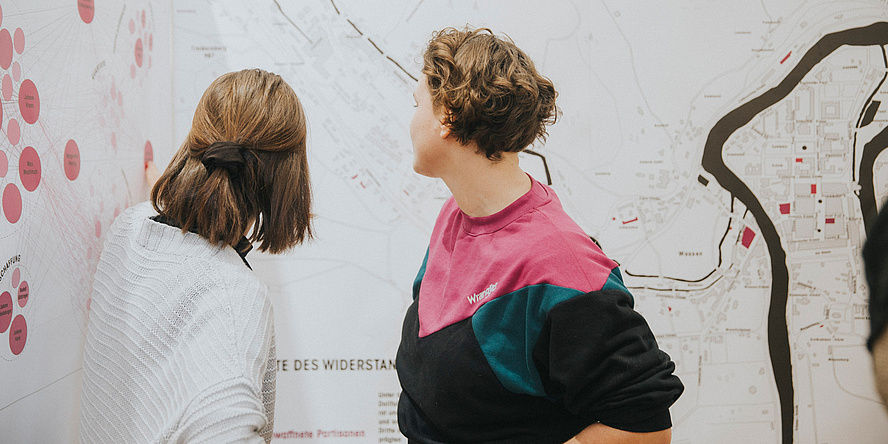 What was the resistance against National Socialism like in Styria? What was it like in Graz, Leoben, Deutschlandsberg and Eisenerz? How can budding architects carry out research and present results? At TU Graz’s Institute of Architectural Theory, History of Art and Cultural Studies, a group of architecture students has intensively dealt with these questions. On the occasion of the 75th anniversary of the liberation of Austria, they are presenting the results of their research and analysis in an exhibition curated and designed by them in Graz, Deutschlandsberg, Leoben and Eisenerz.

The students spent a semester researching and documenting various aspects of acts of resistance against the Nazi regime on the basis of four locations. For this purpose, sources from archives in Austria, France, Germany and Slovenia were examined, historical documents were evaluated, biographies of participants were researched, locations of the events were reconstructed using forensic architecture, and the research results were visualized by means of information graphics, 3D visualizations and models.

The exhibition is composed of display objects that – when unfolded spatially – create an exterior and an interior space. The interior shows content about the respective local resistance varying between each exhibition location; the exterior provides a general insight into the theme of resistance in Styria between 1938 and 1945. This general documentation was prepared by students Ema Drnda, Thomas Lienhart and Lung Peng.

In the last weeks of the Second World War in 1945, more than 200 people fell victim to Nazi crimes in the SS barracks in Graz-Wetzelsdorf. The traces of the crimes were covered up. By reconstructing what happened and carrying out research into the victims, students Lisa-Marie Dorfleitner, Max Frühwirt and Milan Sušić attempt to contribute to a reassessment of this Nazi crime.

The so-called "Anschluss" of Austria to the Third Reich in 1938 was also largely supported by the population in the industrial towns along the Eisenstrasse  in Styria. At the same time, however, a variety of forms of resistance developed, such as the partisan group "Austrian Freedom Front" (ÖFF) in Leoben-Donawitz. The latter was only able to conduct its fight against the Nazi regime with the support of a broad network of help spread throughout Upper Styria. Even in the middle of Leoben, many people risked their lives to provide the partisans with food, clothing, information and shelter. Students Flora Flucher, Matthias Hölbling and Katharina Url use a map of the city to locate this very network and thus show the dangerous environment in which the supporters themselves operated.

Although the respective exhibitions have to forgo an official event due to the coronavirus, there will be a short recorded introductory talk by the curators. More about this on the Website of the Institute of Architectural Theory, History of Art and Cultural Studies (German only). The recorded introductory talk can also be listened to in the exhibition by scanning the QR code on the display.