Vote for Europe: European elections on 26 May 2019

Studying in other EU countries on the same conditions as in Austria, doing research in cross-border cooperation – that’s what the European Union means for studying and research. Vote to help shape the future. 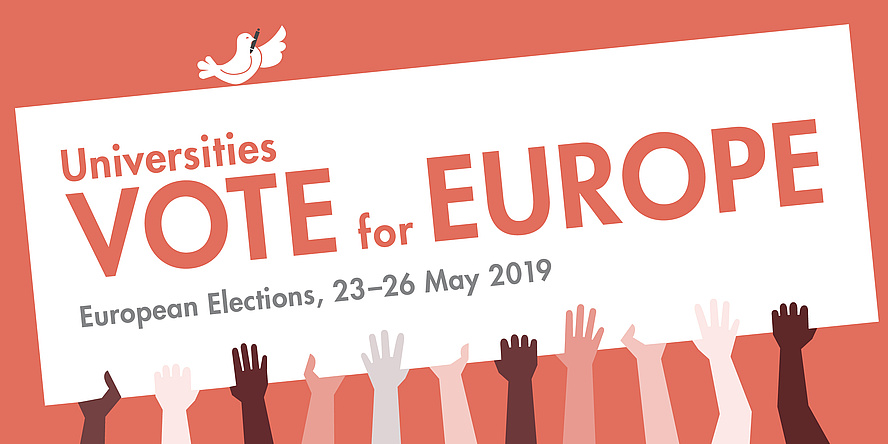 European elections take place every five years. The next election will be held in the four days from 23rd to 26th May. Austrians will vote on Sunday, 26th May 2019. You can find detailed information about the coming European elections in German language on the website of the Ministry of the Interior.

The EU guarantees the right to study in each country on the same conditions as nationals of the respective member state. The EU has been actively supporting this mobility by means of the ERASMUS programme since 1987.

The EU enables cross-border cooperations to be carried out in which research is conducted on important issues in society, such as health, climate and energy – issues which are essential for our future. To do this, it invests continually in framework programmes for research and innovation.
Free science and basic rights
The EU stands for academic freedom, which is inseparably associated with democracy, the rule of law and human rights. It guarantees these principles in the Charter of Fundamental Rights of the European Union (CFR).

As a European and Italian, I have always felt at home in Austria. Europe is one of the biggest projects ever for unity, democracy and solidarity. There is no free research without mobility, and there is no progress without protection of human rights. So go and vote! (Leonardo Alese, TU Graz / Institute of Geometry)

European elections take place in principle every five years. The next election will be held in the four days from 23rd to 26th May. The council of ministers in Austria set Sunday 26th May 2019 as the date for the election of the 18 Austrian members of the European Parliament (MEPs). Austrians and EU citizens with their main residence in Austria who are at least 16 years of age on the day of the election are eligible to vote. Austrians living abroad can vote by post.

Read about what role the benefits of the EU have played in the life of an Austrian nanotechnologist and mother from Linz in the online article on the website of the Universities for Enlightenment initiative.

The Austria-wide Universities Austria (uniko) together with the Rectors’ Conferences of Germany, Italy, Croatia, Poland, Switzerland, Serbia, Slovakia, Slovenia and Czechia have launched the Universities for Enlightenment campaign in the run-up to the EU elections with the aim of calling for people to vote. Graz University of Technology (TU Graz) is involved in this campaign. This is the campaign website.