TU Graz didn’t back pedal in bid for "CFE" EU certificate as a bike-friendly establishment. Mobility research company FGM and the cycling lobby ARGUS Steiermark worked in tandem to present a total of four awards. 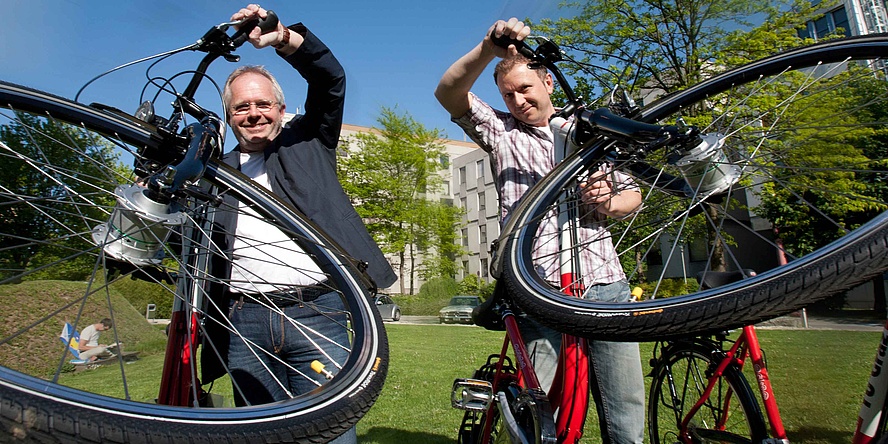 It has long been obvious to bicycle-loving employees of Graz University of Technology. No matter where you park your trusty two-wheeler in Graz, there are always other TU Graz bicycles nearby. Not only with Rector Harald Kainz, pedal enthusiast of the first rank, the bicycle has a firm place in everyday life. "I cycle as often as possible, both to work and to appointments in Graz" is more than just lip service.  The TU Graz bicycle family is growing steadily – because since 2006 TU Graz has not just been along for the ride but has been rigorously pursuing its mobility concept. For this it has now won one of four awards for Austrian pioneers on two wheels.
“We’ve halved the parking permits and at the same time pushed ahead with redesignating the freed-up areas as communication zones. Nearly 1,300 high-quality bicycle parking spaces have been created; each of the three campus locations has a self-service service box; and employees who cycle are offered a free bicycle service every year. In addition, a branded "TU Graz bicycle" is available at favourable conditions," explains Gerhard Kelz, head of the Buildings and Technical Support service department, showing how TU Graz supports its employees in the changeover from car to bicycle.

Green mobility according to EU standardsa

TU Graz's bold commitment to green mobility has now been officially recognized. On 24th September, TU Graz was awarded gold certification as a “Cycle-Friendly Employer" for its commitment in accordance with EU-wide standards. The award is given to companies that promote cycling in their organisation, develop an in-house cycling culture and implement bicycle-friendly measures on a long-term basis. The CFE certification project emerged from the "Bike2Work” EU project. In Austria, where Forschungsgesellschaft Mobilität (FGM) and the cycling lobby ARGUS Steiermark are the sponsors of the certification, "Graz is a pioneer", as Margit Braun of FGM pointed out on 24th September when awarding the certificates to TU Graz, the Bike Citizens Mobile Solutions GmbH company, the diocese of Graz-Seckau and the Med Uni Graz.

Information on all bicycle-related services and campaigns of TU Graz can be found in the Intranet TU4U under "All about bicycles – Technik bewegt".