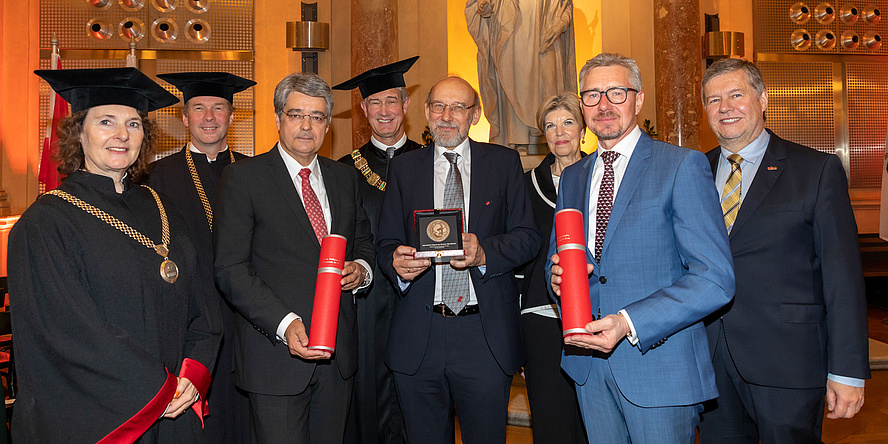 Three outstanding figures were at the centre of the celebration on Tuesday, 26th November in the Assembly Hall of Graz University of Technology. Wolfgang Hesoun, Karl-Friedrich Stracke and Otto Röschel have one thing in common despite their different connections to TU Graz: all three have been particularly committed to TU Graz for many years and have made a decisive contribution to the development of the University.

The title of Honorary Senator is one of the highest academic honours awarded by Graz University of Technology. During the academic ceremony, the two long-time companions Wolfgang Hesoun, CEO of Siemens AG, and Karl-Friedrich Stracke, President Automotive Engineering and Engineering Magna Steyr (retd.), were awarded this title. According to the statutes, the honorary senatorship is awarded to "outstanding figures from outside the University who have rendered distinguished services to TU Graz and to the promotion of its scientific, technical and cultural remit".

The Erzherzog-Johann Medal is awarded as a visible distinction to persons from within the University who have promoted the reputation and development of Graz University of Technology over a longer period of time through their outstanding work at the University. Otto Röschel is such a person. The former director of TU Graz’s Institute of Geometry was for many years deputy chairman of the works council for scientific and artistic university staff, member of the Senate of Graz University of Technology and a representative in committees of the Ministry of Education, Science and Research. Rector Harald Kainz: "With the Erzherzog-Johann Medal we would like to thank Otto Röschel for his extraordinary commitment and his dedication to his colleagues at the national level and within Graz University of Technology.” 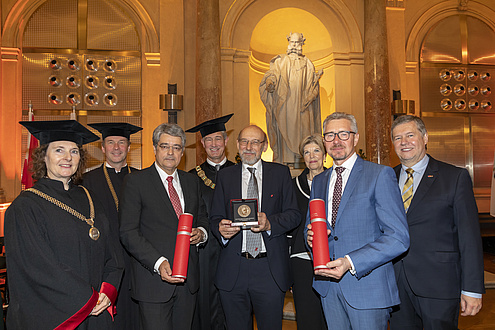 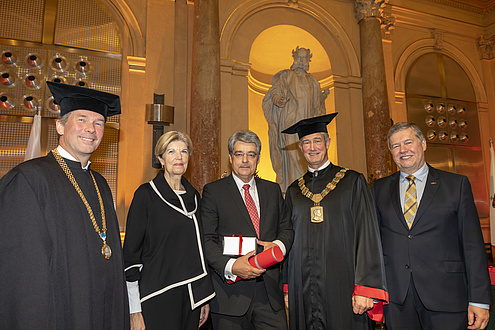 Wolfgang Hesoun, CEO of Siemens AG Austria, was honored with the honorary senator's dignity with regard to the long-standing cooperation between Siemens and Graz University of Technology and the establishment of the Center of Knowledge Interchange (CKI). (from left to right: Laudator and Vice Rector Horst Bischof Chairwoman of the University Council Karin Schaupp, Wolfgang Hesoun, Rector Harald Kainz, Chairman of the Senate Gernot Kubin) © Lunghammer – TU Graz 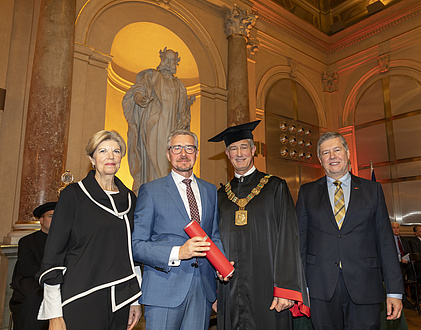 Karl-Friedrich Stracke, President Automotive Engineering and Engineering Magna Steyr (retd.), was awarded the title of Honorary Senator for the long-standing cooperation between Magna and Graz University of Technology and for supporting students in the Field of Expertise "Mobility and Production". (from left to right: Chairwoman of the University Council Karin Schaupp, Karl-Friedrich Stracke, Rector and laudator Harald Kainz, Chairman of the Senate Gernot Kubin) © Lunghammer – TU Graz 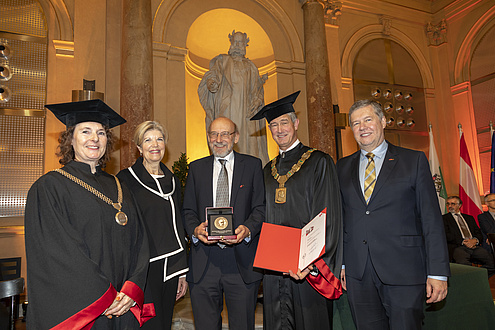 Otto Röschel, former head of the Institute of Geometry at Graz University of Technology, was awarded the Archduke Johann Medal for his special commitment and dedication to his colleagues on a national level as well as within Graz University of Technology. (from left to right: Laudator and Vice Rector Andrea Hoffmann, Chairwoman of the University Council Karin Schaupp, Otto Röschel, Rector Harald Kainz, Chairman of the Senate Gernot Kubin) © Lunghammer – TU Graz