Treasures from a Graz history of physics

Since the beginning of the year, measuring instruments, tools and machinery from more than 100 years of physics history at TU Graz are on show in the cellar of the Institute of Experimental Physics. 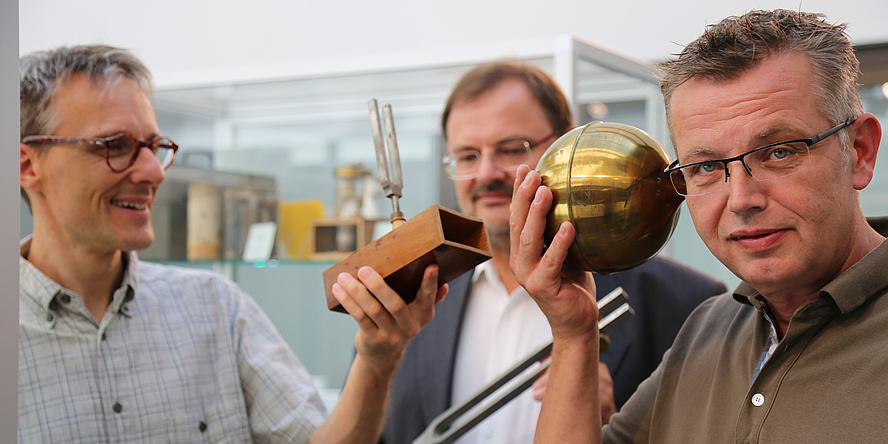 Roland Lamegger, Gernot Pottlacher and Uwe Seidl are holding historic tuning forks and Helmholtz resonators in the physics museum.
“The globe must be the oldest piece in the collection,” explains Gernot Pottlacher from the Institute of Experimental Physics, pointing to a yellowed globe on a wooden frame. Many more places are inscribed on this globe in black letters than would be on a modern three-dimensional image of the Earth. “Cook’s death”, for example, is written near Hawaii. This wonderful globe is one of 128 pieces which Gernot Pottlacher, Roland Lamegger and Uwe Seidl have selected from the available historic stock, lovingly restored and have exhibited in six glass showcases in the light-flooded, roofed-over atrium of Petersgasse 16. 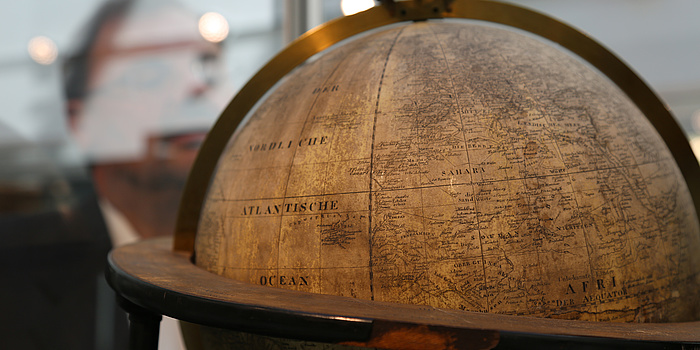 The yellowed globe must be the oldest piece in the huge collection.
In a square-shaped glass room at the end of the atrium hangs a sparkling silver ball from the ceiling on a long string. “That is a Foucault’s pendulum, which I put into operation this morning,” explains Pottlacher. “It shows the Earth’s rotation.”

These and other historic tools, machines and measuring instruments from the history of physics research and teaching at TU Graz have beeen once again open to the public in the cellar of Petersgasse 16 since the beginning of the year. “If someone phones me and I have time, I’m very happy to show them these pieces myself and explain what they’re all about,” offers the professor of experimental physics. In his hands he holds a brittle TU Graz inventory from the year 1887. “This is a very special item. Just look at the writing!” he enthuses. This list and many more similar old textbooks are stored in his office on the first floor of the Institute. 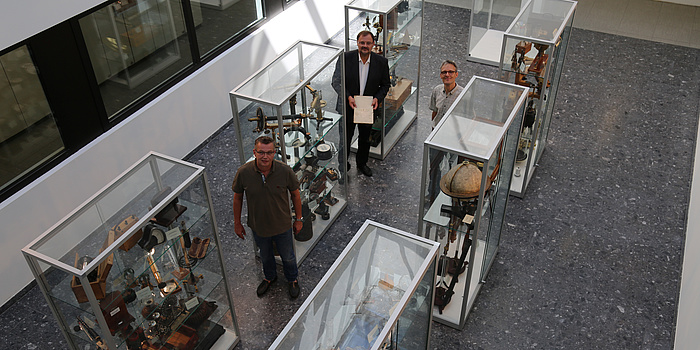 Sometimes the researchers had to look for years to find an explanation to one of the 128 pieces in the physics museum.
In them he looks for diagrams and explanations (in some of them for years) of equipment which is brought to him and whose purpose he doesn’t recognise straightaway. It is not uncommon that some pieces are still used by professors in lectures. For instance, the historic tuning forks and Helmholtz resonators whose pointed ends you can hold to your ear and filter out a particular tone.

The Physics Museum also existed in the past. Gernot Pottlacher’s extensive collection was originally housed in the corridors of the Institute in high showcases made of heavy, dark wood, and was only able to be “relocated” in the bright glass exhibition areas after comprehensive rebuilding of the building. “But we couldn’t even give away the old glass showcases,” explains Seidl. “I completely restored them and they’re now in a storeroom waiting for a new task. 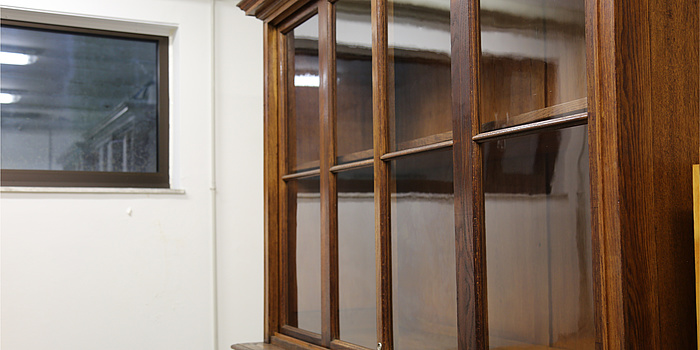