On the importance of asking the right questions

Burton Lee, among others, is teaching European entrepreneurship at Stanford School of Engineering. The expert founder shares his visions and ideas as a guest of TU Graz for two weeks. 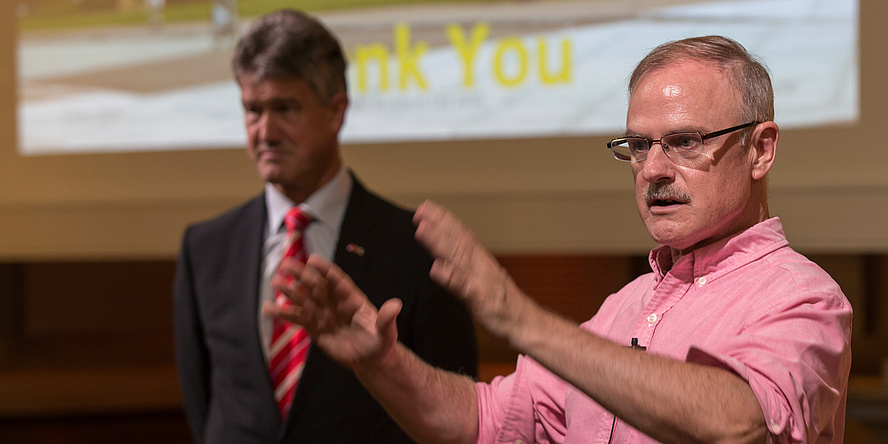 Do you see yourself as an Entrepreneur?

Burton Lee: Yes, I do. The first venture I founded, back when I was a student at Stanford, is now called Spaceport America in New Mexico. Today it is a state-owned enterprise, where the space tourism company Virgin Galactic has established its global operations base. I had the initial idea for a commercial spaceport, built out the initial team and raised the first round of funding. In 2007 I co-founded Space Angels Network, the leading source of seed stage capital for space and aviation startups. And, what I am doing at Stanford today can be considered a startup venture within academia. In 2008 Stanford did not have a course in European Entrepreneurship so I pitched a concept for a new and different kind of course to my fellow professors. Now, each year I have to build a complete program, raise money to support it, and marketing the course to Stanford students.

What is the biggest difference between the Silicon Valley’s and the European way of entrepreneurship?

Burton Lee: In most Western European countries, family-owned companies are the foundation of the economy. In Silicon Valley we know very little about that. We build companies to sell them within a few years. New companies are typically built around people who are not related by blood, but who have similar ideas and get excited about the same things.

In most Western European countries, family-owned companies are the foundation of the economy.

There is quite a strong connection between Universities and companies in Silicon Valley?

Burton Lee: Hewlett Packard - the first company in Silicon Valley –– was founded in 1939 out of Stanford School of Engineering. There were about 11 000 companies founded out of our School of Engineering by 2013, with significant economic results and new job creation. CEOs and successful founders sit in our university advisory boards. In Europe the discussion around universities and the industry always focuses on research collaborations. But our connections to industry go far beyond that. It’s also about students building new companies, developing and testing new product ideas for established companies, and of course employment.

Are US-students more interested in entrepreneurship than European students?

Burton Lee: In my observation, in Europe the number of students at public universities who are actively interested in entrepreneurship is typically around one per cent or less. At Stanford the numbers are around eight to 15 per cent of students. But it is important to say, that this entrepreneurial mind-set is not seen across the entire university. For example the Geisteswissenschaften are still very traditionally academic. We often discuss how we can move students in Geisteswissenschaften closer to Silicon Valley. How, for example,can a person with a degree in French literature bring experience, skills and perspectives that would benefit a tech company?

How, for example,can a person with a degree in French literature bring experience, skills and perspectives that would benefit a tech company?

How Do you encourage this kind of mind-set?

Burton Lee: Many undergraduate and graduate students choose Stanford because of our unusually strong entrepreneurship culture. At Stanford, starting a company is considered one of the best things you can do as a student. It is exciting, it is challenging, it is about making your dreams and imagination come true. Working for most mature technology companies today – unless it is Google, Facebook or Tesla, for example - is a second choice for many Stanford students. Doing a startup is increasingly a viable career path. And if your company fails, you can still work for an established company who will consider. You to be an even more interesting employee.

What is your impression of TU Graz in terms of innovation and entrepreneurship?

Burton Lee: I have spent a lot of time talking to startup teams in the last few days. At the Science Park, I came away very impressed by the health care startups,that showed how to think about the wider business and social context of new products and services, rather just than the usual engineering. At the Product Innovation Project Final Gala, students were telling stories and showing up in surgical gowns when presenting their product and business ideas – it was outstanding. Including theatre, performance and drama in business and engineering education – that’s pretty radical and a huge positive change. I am also impressed by the university’s leadership – there is a strong will to try something different and new. But there are also some fundamental things that need to be done in teaching software programming. We need to give students the ability to build and code apps, to participate in Hackathons and to test new ideas by writing software over a weekend. This would have a big impact in increasing entrepreneurship at TU Graz and in the region. The students ideas don’t have to be completely serious. The idea is to bring students together, to encourage them to work on projects, test new ideas with real users, and then do it all over again. And typically it is much quicker to be innovative in the field of software than in mechanical engineering, for example. I´m very optimistic, that TU Graz can significantly expand entrepreneurship as a mind-set and practice in the near-term if we can increase the numbers of students learning to write code.

There is a strong will to try something different and new.

Are there any advantages Styria as a region has?

Burton Lee: The health care sector is very interesting and the transportation cluster obviously very strong. I expect the region to continue its leading position if we can help companies here to identify some of their biggest challenges around digitalisation, sales & marketing, product design and management, innovation management, and governance. University, enterprise and political leaders are open minded and are taking young founders seriously. In Graz I am trying to understand how industrial and artistic designers can be brought together around the practice of Design Thinking to support and strengthen established and start-up companies.

One of your most important approaches is Design thinking – what is it about?

Burton Lee: There are three main elements: First, Understanding and identifying the right questions to ask, so that you don’t end up solving the wrong problem. Second, A deep engagement with end-users as soon as possible, before you start the engineering process. And third, developing as many inexpensive prototypes and designs as possible. You want to fail as much as possible with soft prototypes, because this brings you closer to understanding the real customer problem; solving it now with a high degree of certainty reduces the risk of product failure later on. Many of the most successful IT-companies spent a lot of time storyboarding and sketching out the full user experience. You should build technology around humans and not the other way round.

What, in your opinion, is the main reason, Silicon Valley companies are successful?

Burton Lee: We consistently ask questions that nobody else asks. We reframe problems to identify much more interesting solutions that deliver sustainable competitive advantages. Apple for example in 2006 started to look at the cell phone as a software platform rather than a hardware device and asked themselves: How could we use this platform to offer thousands of different kinds of services to our users?

At the invitation of TU Graz and other partners from commerce, industry and politics, Burton H. Lee was a guest in Styria in June for two weeks. As an international expert on the subject of European entrepreneurship, he devoted his attention to both students and the Styrian innovation and founder community and analysed the potentials and challenges in the region. In the course of his stay at TU Graz, Burton Lee held a lecture in the full-capacity Hall entitled “New lessons from Silicon Valley for Austrian industry, universities and regions”.

In addition to the view of other representatives of international entrepreneurial showcase projects, Burton Lee’s specialised knowledge is being incorporated into a current strategic project of TU Graz which is meant to strengthen the profile of TU Graz as an “entrepreneurial university”. As an entrepreneurial university, TU Graz already has an outstanding position in Austria, demonstrated as it is by its leading position in the in the COMET programme of the Austrian Research Promotion Agency (FFG), its high third-party revenues, the international success of its student teams and the Science Park Graz.

To expand the role of TU Graz as a driver of entrepreneurial activities, entrepreneurial education, awareness, infrastructure and context are being analysed in the said strategic project and, where useful and financeable, additional subjects are being conceived for TU Graz students and researchers. TU Graz is working together with the Institute of Corporate Leadership and Entrepreneurship at the University of Graz in depth in the field of teaching and awareness. To support this, the so-called Styrian Entrepreneurship Platform ST-E-P has been founded by both universities.

Innovation expert Burton Lee is based in Silicon Valley and is active in many fields, such as science, industry, technology and design as well as government and politics. Lee teaches entrepreneurship und innovation in Europe at the Stanford School of Engineering. On top of this, the managing director of Innovarium Ventures is a much sought-after advisor of European companies, universities, industrial clusters, governments, investment funds and technology parks. He coaches European start-ups and develops new approaches which are tailored to specifically European challenges in the field of innovation.