The start of the 2017/18 winter semester marks the opening of architecture master’s studios in the developed loft of TU Graz Campus Alte Technik. Students take up their places for one semester. 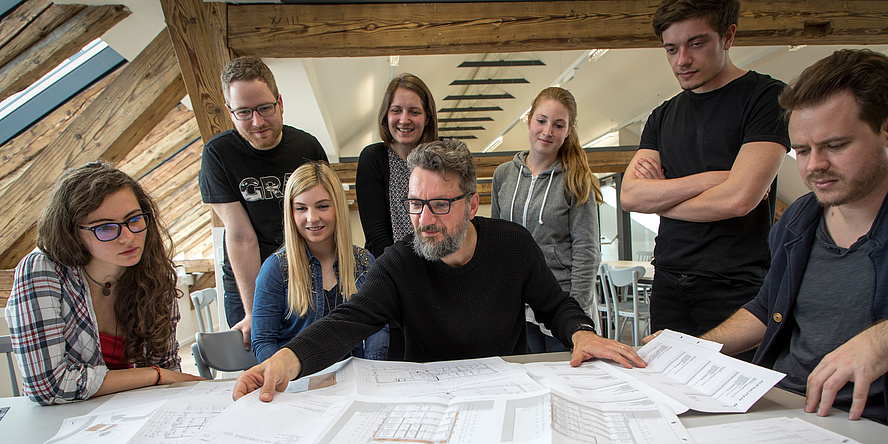 Teaching and learning in the new architectural master’s studios at TU Graz. University assistant Armin Stocker surrounded by students.
A new dimension for architecture master’s students has opened up across the rooftops of Graz. Space for a total of eight master’s studios has been created in an area of 800 square metres in the developed loft of the Alte Technik building. The studios will host 160 workplaces which will be used by architecture master’s students for one semester for working on their designs – in the context of eight parallel courses. The concept of the studios is at last being realised.

Working in the studio

The infrastructure supports something which is fundamentally important in the architectural working process: working together in a group over a long period. The budding architects learn to cope with the fact that their work is publicly visible in the shared space – this is part of the deal. And at the same time the spacious, interconnected studios provide an atmosphere which promotes design. “In the form of these master’s studios, we’ve created a working and living space which puts the idea of the studio at centre stage. Here, confrontation in the best possible sense takes place,” explains dean of studies Hans Gangoly, who along with Armin Stocker of TU Graz’s Institute of Architectural Technology supervised the development on behalf of the Faculty, on the occasion of the opening of the studios at the beginning of October.

“We’re training a new generation of Graz architects here,” stresses Detlef Heck, Vice Rector for Academic Affairs, who sees this as “another step forward after revising the curricula”. The new infrastructure and its potential use offers the best conditions for teaching and learning architectural design and drafting at TU Graz under practical conditions.