Jussi Behrndt conducts research in the field of modern analysis and on the mathematical foundations of quantum mechanics. He has been the new Dean of the Faculty of Mathematics, Physics and Geodesy since April. 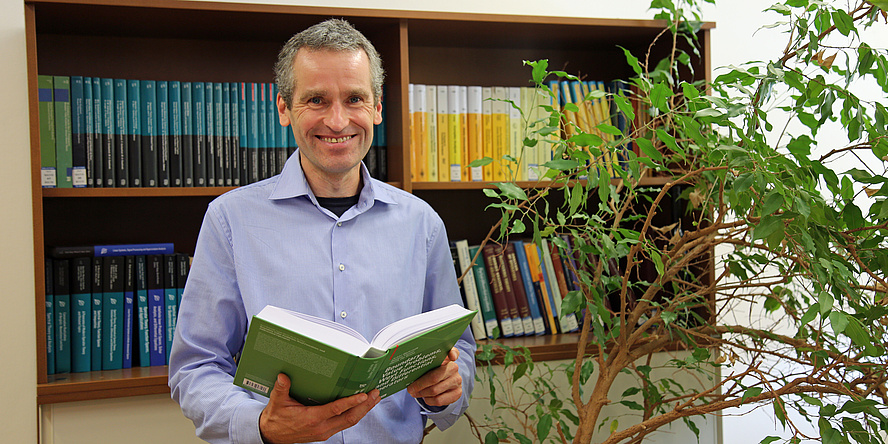 Whether on the shelves on the walls or in high stacks on the desk, Jussi Behrndt is surrounded by books in his office, some of which he wrote himself. “In mathematics, we basically only need paper and pencil, a computer and a few books,” explains the new dean. “But we’re a very heterogeneous faculty. Of course, everyday research in physics and geodesy is very different and requires a lot of research infrastructure. This is to a certain extent new territory for me. As dean, I try to get an insight into the requirements of the respective disciplines and give support in as many places as possible.”

After working at TU Berlin and TU Vienna, the native Berliner has now been in Graz since 2011 and since then he has also been the deputy head of the Institute of Applied Mathematics at TU Graz. In his research, Behrndt is primarily concerned with differential operators, which play an important role as mathematical foundations in theoretical physics and quantum mechanics, for example.

A heart for teaching

Teaching continues to play an important role in the everyday work of the mathematician: “I’ve been involved in university teaching for 25 years now and bring to bear a lot of experience here. I really enjoy working with the students.” In 2014, Behrndt received the TU Graz Prize for Excellence in Teaching for his lecture “Vector analysis for physicists”. “This is of course a great recognition. Afterwards, I treated all 150 students to an ice cream.” He is glad to be able to return to in-person teaching more often after the past two years: “You can interact much better in in-person exchanges. Some of the interaction between students and lecturer gets lost online.” At the same time, Behrndt also sees advantages to virtual teaching, among which are greater flexibility for students and the ability to view lectures online at a later point in time. “We’ll continue to keep live streams and recordings.”

Behrndt is well connected internationally in his field of research and has frequently worked abroad during his research career, spending time in the Netherlands, New Zealand, Japan and most recently in 2020 as a visiting professor at Stanford University in the USA. “In my field of research, you get to travel a lot and have colleagues all over the world. I enjoy this very much. This exchange gives important impulses and is also supported by TU Graz.”

Even though he is regularly drawn to faraway places, Behrndt feels very much at home in Graz. “I like the quality of life in the city and I like being at TU Graz. In the meantime, I already feel like a Styrian,” he smiles. Behrndt has had a close relationship with Austria for a long time; as a child he spent a few weeks every summer in Carinthia. This is also where his love of the mountains comes from, and he often spends his free time hiking, climbing or cycling. At first he had to be persuaded by colleagues to go skiing, but he now enjoys it: “This is what singles mathematicians out – we like a challenge. It’s only fun when it’s difficult!” In addition, Jussi Behrndt spends as much time as possible with his two daughters, aged 8 and 13. Here, visits to the swimming pool and eating ice cream are the main things on the programme in summer, because, says the new dean with a laugh: “Those two would never go hiking with me!”

This article was first published in TU Graz people #81 (in German), the newspaper for university members and interested parties.