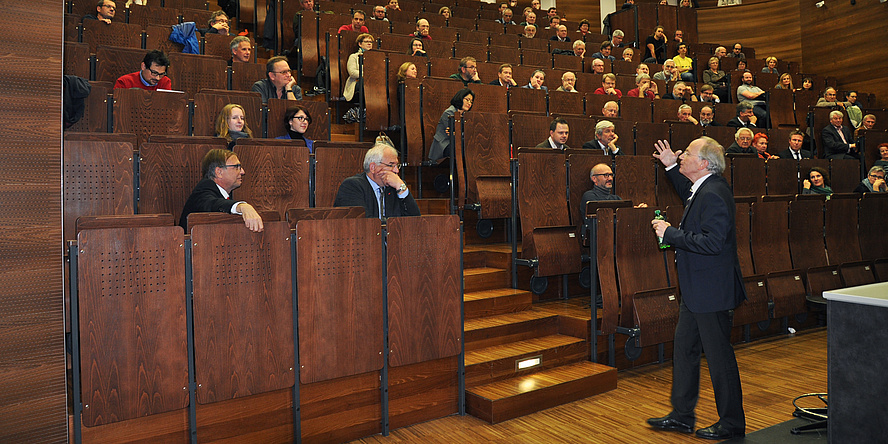 Rudolf Taschner fascinated with his speech.

With over 5.100 students in the 19 bachelor’s and master’s programmes and some 630 doctoral students, the successful inter-university cooperation project NAWI Graz Teaching has now been running for ten years and benefitting both students and teaching staff. On October 19 the anniversary was celebrated in the Hörsaal H "Ulrich Santner" at TU Graz. An interview with Detlef Heck, deputy chairman of the NAWI Graz Steering Committee.

News+Stories: What was the basic idea behind NAWI Graz Teaching when it was first offered in 2006?

Detlef Heck: Strengthening strengths – this short slogan summarises the basic idea of NAWI Graz Teaching. Apart from this, the idea of NAWI Graz Teaching is captivating from the point of view of the students. After all, it offers a greater breadth of studies so that students can follow even more of their fields of interest. Both universities, the University of Graz and TU Graz, thus offer specialist teaching in the natural sciences from which they both benefit. Of course, behind NAWI Graz Teaching there is a considerable coordination process which doesn’t cut back on the range of courses, but rather trims it down to a critical mass to offer value added in teaching and research.

Were there any obstacles or stumbling blocks at the beginning?

Detlef Heck: It goes without saying that it is no small thing to adapt long-established structures in tradition-conscious universities to new objectives. After visionaries in both universities recognised what opportunities could result from a partnership to a serious cooperation, stumbling blocks were removed. On top of this, it shouldn’t be disregarded that many details still had to be solved in administration, from the student management system to legal questions.

How do students and teaching staff benefit from this inter-university cooperation project?

Detlef Heck: In my view, our students benefit from a bigger range of programmes, especially from the diversity of the master’s programmes, and from the cooperation of both universities. The diversity of students from both unis leads in any case to a better togetherness and to an understanding of their different perspectives.

In what direction are the NAWI Graz study programmes developing?

The available study programmes are being constantly evaluated and improved.

Detlef Heck: When a professorship becomes free in the area of NAWI Graz, the specialist colleagues decide among themselves what professorship would make sense from a strategic point of view. This is then staffed by the respective university. Members of both universities are on the Appointment Committee so that here, too, shared coordination and a cooperative path are taken. The choice of professorships to be newly filled is thus a step towards well coordinated areas which best allow synergies in teaching and research.

NAWI Graz was established in 2004 as a strategic cooperation project between two universities and was unique in Austria. TU Graz and the University of Graz combined their resources and since then have been working together closely instead of just next to each other in natural science subjects. In 2006 the cooperation with NAWI Graz Teaching was expanded to include study programmes and since then has been providing education in the fields of Bioscience, Chemistry, Earth, Space and Environmental Science, Mathematics and Physics.