The company behind the instant messaging service Snapchat will be researching new technologies in the field of mixed reality with TU Graz over the next six years. A working group is being set up and the professorship will be filled by the end of the year. 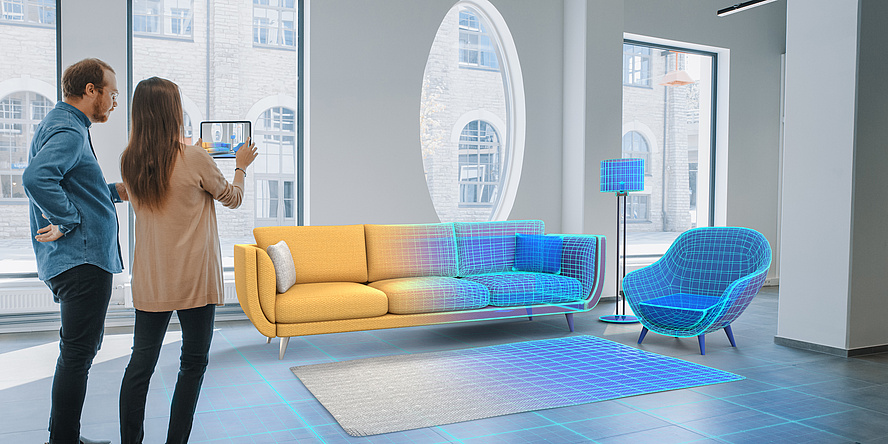 The new working group "Mixed Reality" at TU Graz supported by Snap Inc. will develop visionary software methods in the field of camera technology, and explore new approaches to visual information processing at the interface of digital and physical reality. © Gorodenkoff-AdobeStock

California-based Snap Inc. is a company that revolves around the camera. Users make use of their cameras to create short videos or pictures – so-called snaps – and distribute them via the instant messaging service Snapchat, thus communicating with their circle of friends and their community. The camera is the central tool and interface between the real world of the users and the possibilities and applications of the digital world. In this way, a completely new “mixed reality” can emerge.

Snap Inc. is now funding a tenure-track professorship including assistant and post-doctoral positions at the Institute of Computer Graphics and Vision at Graz University of Technology (TU Graz) for a period of six years. Key topics of the new working group to be established include developing visionary software methods in the field of camera technology, and exploring new approaches to visual information processing at the interface of digital and physical reality. The endowed professorship will also pursue new application ideas for mixed reality, in particular the perfect visual fusion of photos with computer-generated content. The position will be advertised internationally and filled by the end of 2022.

“We are convinced that in the future people will have an even greater interest in digital experiences in our real world and for this to happen naturally – for example via augmented reality glasses – more research is needed. We are therefore delighted about this partnership with TU Graz and are looking forward to the results of the research team,” says Daniel Wagner, Director of Computer Vision Engineering at Snap Inc.

“Thanks to this cooperation with Snap Inc., TU Graz’s long-standing leading role in the research field of mixed reality is gaining increased international visibility. There are only a few working groups like this in the world, for example in Cambridge or in Zurich. TU Graz is proud to belong to the big league in mixed reality research. This is proved once again by this collaboration,” says Horst Bischof, Vice Rector for Research at TU Graz, delighted by the funding of this professorship by Snap Inc.

The team at the Institute of Computer Graphics and Vision at TU Graz, led by Dieter Schmalstieg, has been researching mixed reality for many years. At TU Graz, significant contributions to the state of the art have been made in this research area. These include visualization, rendering, spatial interaction and authoring, etc. For example, the first mobile system for 3D camera tracking was realized three years before the first smartphone came onto the market.

For Dieter Schmalstieg, one thing is clear: “Even big tech companies like Snap, Microsoft or Google are investing in basic research to stay competitive in the long run. This circumstance enables computer science researchers at Austrian universities to help shape the future of mixed reality technology. And our students also benefit from this.” In addition to the professorship, the mixed reality working group also includes four assistant positions and student assistants.

About Snap Inc.
Snap Inc. is a company with headquarters in Santa Monica, California, and owns the app Snapchat, among others, which is used by 600 million people every month. The company specializes in camera technology and sees the rediscovery of the camera as the greatest opportunity to improve the way people live and communicate. Snap Inc. contributes to people expressing their thoughts and feelings, living in the moment, expanding their horizons and having fun together. You can find more information at snap.com

At TU Graz, mixed reality research is anchored in the Field of Expertise "Information, Communication and Computing", one of five strategic research foci.