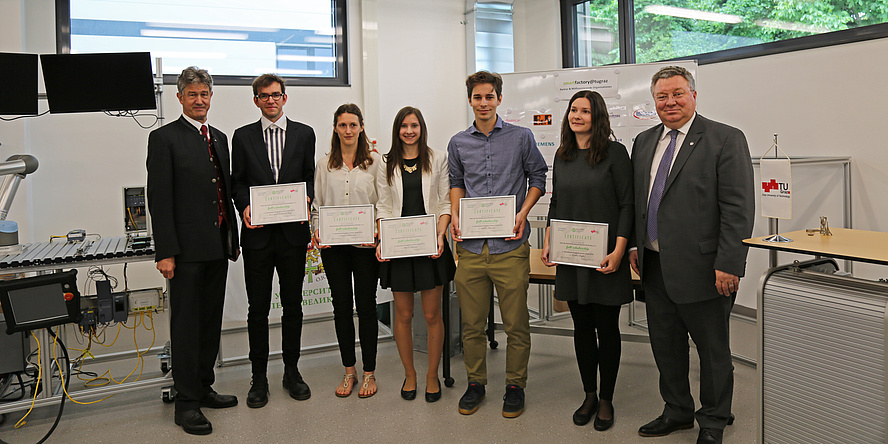 More than 500 students from over 50 countries attend the courses of the summer school of Peter the Great St. Petersburg Polytechnic University. Among these are five students of TU Graz who were awarded scholarships on the occasion of a visit by Rector Andrey Rudskoy on 18th May 2018.

‘We were at a particle accelerator in the context of the physics bachelor’s programme. As I saw there was a course on plasma physics at the summer school, I thought to myself, what an ideal opportunity, and I applied for it straight away,’ says Verena Mitterauer, describing her motivation to take part in the summer school. Over and beyond the subject specific courses, the students are also planning to acquire skills in Russian and to broaden their horizons.

‘Going to Russia means getting to know a different culture – it’ll involve a programme of contrasts, no longer European or Europeanised. ‘I’m going to try to get to know the local people and to experience Russian culture,’ says Bernhard W. Hopf, who is enrolled in two master’s degree courses at TU Graz – Civil Engineering Sciences and Constructive Engineering as well as Geotechnical and Hydraulic Engineering – and wants to do the Civil Engineering and Architecture course at the summer school in St. Petersburg.

Rector Andrey Rudskoy visited Graz to sign the extension agreement of the strategic partnership between both universities. ‘Peter the Great St. Petersburg Polytechnic University is one of the best European universities in the Eastern European region,’ stressed Rector Kainz, enthusing over more years of collaboration and thanking Rector Rudskoy for his great personal engagement for the successful cooperation. In return, the latter thanked Rector Kainz for the longstanding friendship and partnership between the two universities – in this sense a tradition has been founded that will be continued in the younger generation.

The cooperation between Peter the Great St. Petersburg Polytechnic University and TU Graz started more than 30 years ago. The first cooperation agreement between the universities was signed as early as 1985. This was expanded into a strategic cooperation agreement and student exchange agreement in 2013. On top of this, the exchange of staff, joint research work and the twinning of the cities of Graz and St. Petersburg made for a close relationship between both universities.