As part of the joint iTalent-South East initiative, the Industriellenvereinigung Steiermark and Graz University of Technology have for the first time awarded scholarships to five young IT-talents from Southeast Europe. 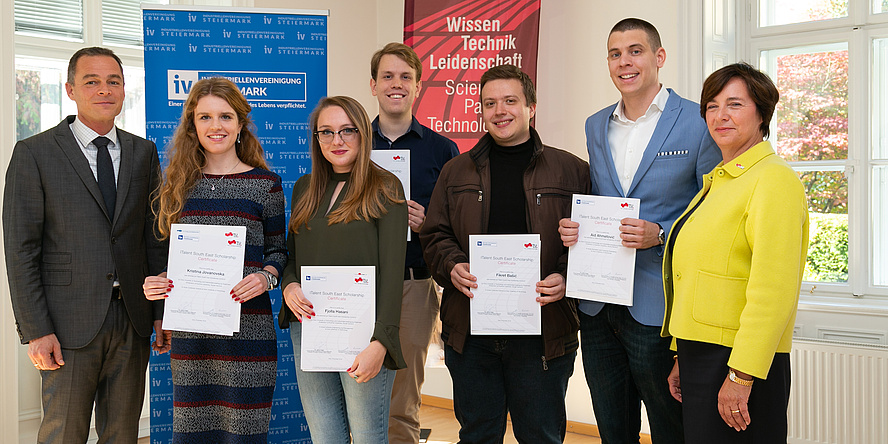 The industry in Styria urgently needs young IT talents and TU Graz offers international study programmes. So what is more obvious than joining forces and looking across the borders for talented, motivated students who aim for a career in computer science, software development, IT security, robotics, AI, data management or similar fields? With the scholarship programme iTalent South East, IV-Steiermark and TU Graz are now jointly launching an initiative to support young talents from Southeast Europe both professionally and financially. "This scholarship programme is a further milestone in the cooperation between industry and science to strengthen Styria as an innovation hub", emphasise IV-Steiermark Managing Director Gernot Pagger and Claudia von der Linden, Vice Rector for Communication and Change Management at TU Graz, in unison.

Support for IT talents

Gernot Pagger and Claudia von der Linden awarded the first five scholarships on 9 October at the Haus der Industrie in Graz. The two female and three male scholarship holders from Serbia, Macedonia, Bosnia and Herzegovina and Kosovo are characterized by excellent academic achievements, and special commitment and passion in their previous education. In October, the five students began their studies in one of the three international English-language master's programmes at TU Graz from Computer Science, Information and Computer Engineering to Software Engineering and Management. The grant amounts to 4,000 euros per person and academic year and will be extended for a further year given an appropriate academic performance.

In the academic year 2019/20 the talent scholarship programme will continue and five scholarships will again be awarded to IT talents. Interested students can apply for an iTalent South East scholarship from now until 15 January 2019. For further information follow this link.