Gender and diversity in research and teaching

On International Women’s Day in March the awards were advertised. Now the names of the TU Graz researchers and teaching staff who were allocated the gender and diversity awards have been published. 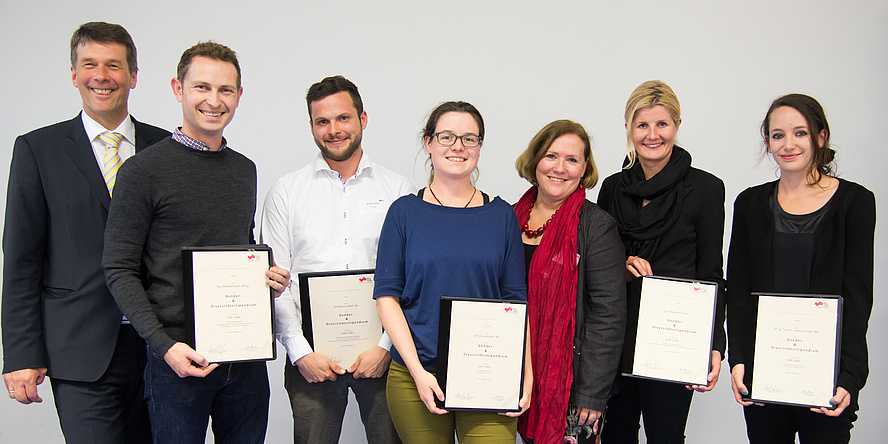 Vice-rector Horst Bischof, Stephan Bauer, Matthias Wolf, Alina Kratzer, Barbara Herz, Marianne Kraut and Johanna Pirker.
TU Graz awards a sum of 1,000 euros to students, teaching staff and researchers who deal with aspects of gender and diversity in their research or teaching activities or who want to carry out continuing education in this field. The three women and two men were chosen by a jury consisting of Vice Rector for Research Horst Bischof, Cornelia Lex from TU Graz’s Institute of Automotive Engineering, Daniela Fuchs-Hanusch from the Equal Opportunities Working Group and Barbara Herz, head of the Gender Equality and Affirmative Action Office.  And the winners are:

In his master’s thesis “Evaluation of a training program for unusual attitudes and stall recovery in simulated and real flight” at the Institute of Mechanics, Bauer investigated the effect of a newly developed training programme on trainee pilots. Due to a methodological mix in the training modules which included gender-specific prerequisites and preferences, a better flight performance and enjoyable learning were facilitated.

Kratzer dealt with gender and women-sensitive planning in architecture in her master’s thesis “Women’s bathhouse” at the Institute of Construction and Design Principles. The thesis examined the question of localising gender in society and architecture in particular and was followed by a design of a bathhouse for women – independent of religious and cultural factors.

Kraut is a project university assistant at the Institute of Vehicle Safety. In her ongoing doctoral thesis “Human factors and vehicle dynamics in traffic-safety studies”, she is carrying out driving experiments on subjects of different gender and age, and with different driving experience and driving license classes. On top of this, she is reviewing accident statistics with relation to documented gender differences.  The doctoral thesis is meant to contribute to raising road traffic safety and to adapting traffic safety investigations in such a way that not only the road and its facilities, geometry and buildings are checked for faults, but also that a holistic main focus is placed on the interaction between road, people and vehicles.

Pirker was rewarded for her course “Game Design and Development II”. During the development of computer games, various groups of persons are often excluded. The course focused on game design errors and sexism and students were instructed to develop “inclusive games” for all. “It’s especially important for me that students understand how software products can be designed in an more attractive and integrated way. Here, it wasn’t especially about designing games for women, but rather designing games for EVERYBODY,” says Johanna Pirker, who works as a university assistant at the Institute of Interactive Systems and Data Science.

Wolf won a prize for his conference article “Age in industry – current and future industrial challenges: demographic change and measures for elderly workers in Industry 4.0" for the “International Conference Management of Technology" in Dubrovnik. In it he proposed that jobs in industry are not optimally oriented to older employees. Matthias Wolf, who is a university assistant, also deals with this topic in the framework of his research activities at the Institute of Innovation and Industrial Management.
Through numerous offers, TU Graz promotes a culture of diversity and appreciation in which equal opportunity can become a reality. Through clear guidelines and firm action, the university works against discrimination. Only in such a way can each person unfold their personal potential and contribute to innovation, teaching and research.
Office for Gender Equality and Equal Opportunity
Mandellstraße 5/I
8010 Graz
Phone: +43 316 873 6092
www.tugraz.at/go/gleichstellung