Tanja Weiß came to TU Graz as an apprentice. Today, she is employed at TU Graz, has passed her university entrance exams and started a study programme. A success story formed in the lab. 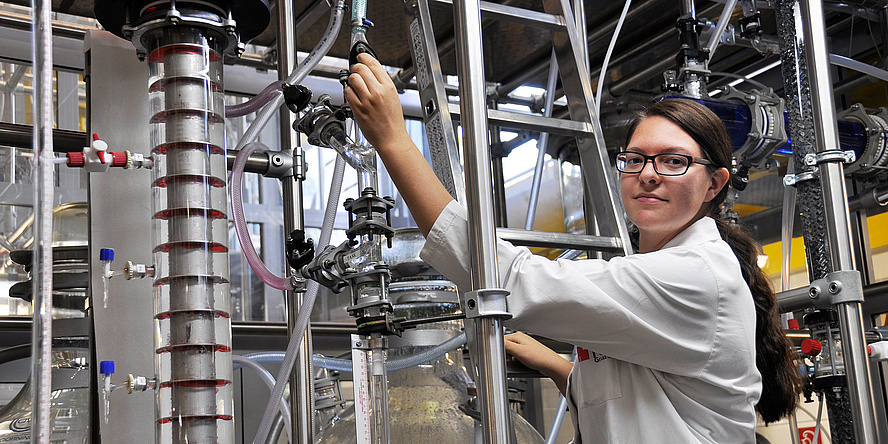 Tanja Weiß in her element: at work in the lab.

Tanja Weiß stands in the middle of the lab in Inffeldgasse 25, and all around her bubbles and smokes. The pockets of her white lab coat have holes in them – chemical engineering is no simple business. When you see the enthusiasm with which she performs her tasks even after years of work, you can’t imagine her in any other setting. This is her world. But it was chance that brought her here: “I wanted to learn a technical occupation – could also have become an electrician,” she says with a cheerful laugh. “A friend of mine applied for an apprenticeship as a chemistry lab technician and brought me along with her. Funnily enough I always managed to do very well.”

Apprentices could only be taken on singly at TU Graz after their training because there were not enough posts or external funding. But after the three-year apprenticeship period, Tanja Weiß had a stoke of luck. The trained apprentice was hired by the Institute of Chemical Engineering and Environmental Technology as an emergency substitute and was originally meant to occupy the vacant post of chemistry engineer for two months. “People were so impressed with Tanja after the first month that she quickly got a permanent position,” explains her colleague Herta Luttenberger, looking back. Also, doubts of whether a trained chemistry lab technician could live up to the broader requirement profile of a chemical engineer were soon dispelled: “Tanja acquired all the necessary abilities and today meets all the requirements. That is really unusual,” explains Luttenberger.

People were so impressed with Tanja after the first month that she quickly got a permanent position.

The planned two months have meanwhile become almost six years. And Tanja Weiß continues on her path with dedication. In her fourth apprenticeship year she passed her university entrance exams and began to study chemical engineering herself at TU Graz in the 2013 winter semester. “Many of the courses are just round the corner at the Campus Inffeldgasse and I learn a lot I need for my studies at the institute. Of course it’s strenuous concentrating on work and study topics at the same time,” she exclaims. She’s grateful to the Institute management for being able to adapt her working times to the semester plan. “It says a lot for TU Graz that you can start an apprenticeship here and stay until your studies,” her colleague Herta Luttenberger sums up.

It says a lot for TU Graz that you can start an apprenticeship here and stay until your studies.

The young woman wants to pass on her knowledge and her fun at work. Tanja Weiß is responsible for the safety briefings at the Institute, and instructs students in the guidelines and how the lab works. She also helps out with training apprentices at the Institute when she can. “I’d like to teach young people as much as possible and also show them how to enjoy working in the lab. Thanks to the various experiments, no day is like another. At the start of my apprenticeship, I never thought I would one day train others.”