Bridging the gap: Prizes for gender and diversity

With four ‘Mind the Gap’ prizes, TU Graz rewards students and researchers who take into account aspects such as age, gender and culture in their theses or lectures. 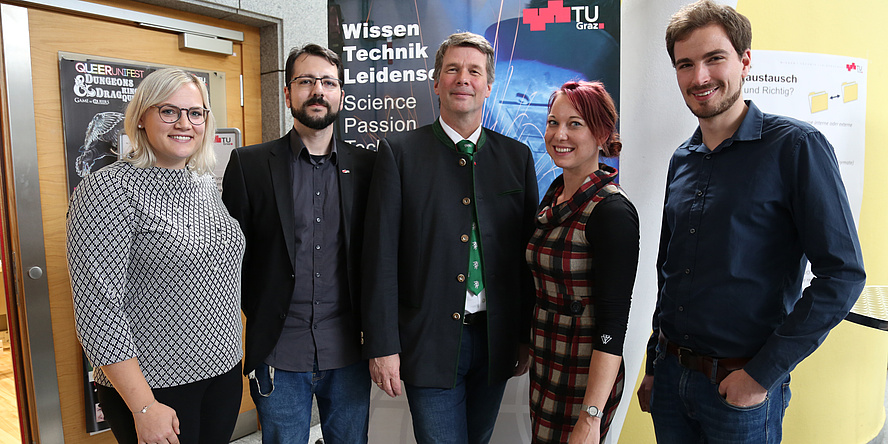 What connects a project thesis on enjoyment training in a virtual environment for the elderly with a lecture which looks at the topic of ‘Energy and environment’ from the perspective of intergenerational fairness and cultural background? What has the doctoral thesis examining how female teenagers can be inspired to carry out coding got in common with a vehicle concept trialled by persons of different genders for transport in the city? In all four cases, teaching staff or researchers take into account aspects such as age, gender and culture as important factors in their research or teaching projects in the technological or scientific domain.

For this intentional discussion of topics of gender and diversity, computer science student Dini Amir, university assistant Petra Ochensberger from the Institute of Electricity Economics and Energy Innovation, Bernadette Spieler, university assistant at the Institute of Software Technology and Michael Wild, mechanical engineering student, all received ‘Mind the Gap’ prizes worth some 1000 euros each from Vice Rector for Research Horst Bischof at the Dialog@TU Graz forum on 7th November. TU Graz sponsors scientific theses and publications, conference articles, teaching content and continuing education of researchers and students with annual prizes advertised in March by the Office for Gender Equality and Equal Opportunity. The precondition for these prizes is that aspects such as culture, age, gender or disability play a role.

Computer science student Amir Dini developed a virtual environment for enjoyment training for elderly people in his master’s project ‘VR-SenseCity’ with the aim of activating all five senses and the personal experiences coupled with them. In an archetypal scenario, an interactive journey takes place by means of a sensory portal which trains enjoyable perceptions. Measurements of attention and emotion allowed a detailed analysis of the mental state of the users. The master’s project at TU Graz’s Institute of Computer Graphics and Knowledge Visualisation was developed in cooperation with the JOANNEUM University of Applied Sciences and the Gesellschaft für Aktives Altern und Solidarität der Generationen (GEFAS), and supervised together by Fraunhofer Austria and JOANNEUM RESEARCH DIGITAL, and funded by the ‘Zukunftsfonds Steiermark’ (the SenseCity project) and JOANNEUM RESEARCH DIGITAL.

Petra Ochensberger: Energy and living space for the generations

In the framework of the ‘Energy and environment’ course, Petra Ochensberger discussed social justice within one generation and between generations. She confronted her students with social and societal aspects which are often neglected in technology. In additional to this emphasis on content, Ochensberger included the numerous international students differently due to their dissimilar cultural and university backgrounds.

In her doctoral thesis ‘Development and evaluation of concepts and tools to reinforce gender equality by engaging female teenagers in coding’ Bernadette Spieler concentrated on how to inspire coding in teenage girls. Embedded in the EU-H2020 project ‘No one left behind (NOLB)’, the Pocket Code learning tool was integrated in a variety of school subjects. In this way, female pupils were encouraged to carry out programming. The research findings of the thesis showed how positive the effects of deliberate promotion measures in computer science are. Spieler thus proves the important role of a gender-sensitive education system when it’s a matter of safeguarding greater diversity especially in a technical career.

Michael Wild developed a new vehicle concept for urban transport in his bachelor’s ‘Kinematic simulation of a bicycle’. To enable city dwellers, companies and businesses economical access to sustainable mobility, he combined in a cooperative work with two men and a woman the advantages of cargo bikes, Segways and e-scooters into a harmonious whole product. When trialling the prototype, the gender aspect was particularly taken into account. The results showed, however, that gender had no influence on how well the subjects coped with the vehicle. On the contrary, factors such as willingness to learn, size and motivation demonstrably influenced the familiarisation phase regarding the bicycle.

At the Diversity website of TU Graz you can find more information about prizes for gender and diversity.

Mind the Gap – prizes for gender and diversity