Graz University of Technology is opening a liaison office at Tongji University in Shanghai. Head of office, Clara Fischer, talks about Austrian-Chinese relations and life in the Middle Kingdom. 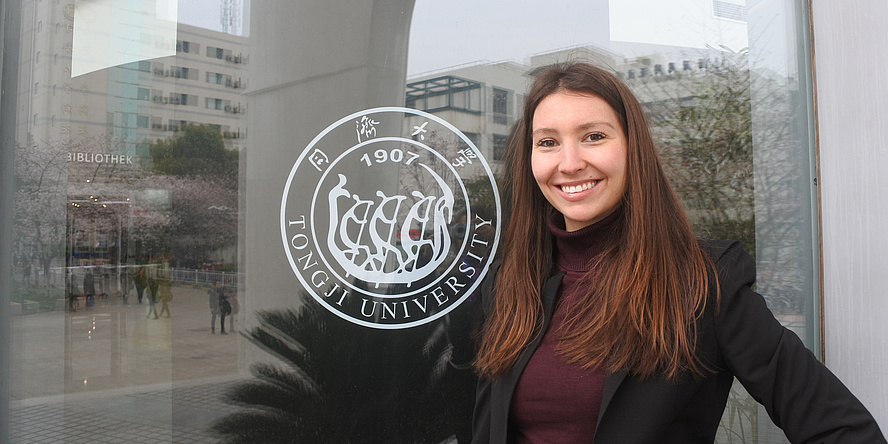 Clara Fischer heads the TU Graz liaison office at Tongji University. Activities of the office support students and staff in exchange programmes and aim at strengthening relations between the two partner universities.

TU Graz is opening its first international office at partner university Tongji University in Shanghai. The aim and task of the office is to bring about even closer ties between the partner universities, expand and develop cooperation between Tongji University and TU Graz and promote the exchange of students and staff. Clara Fischer, who heads the TU Graz office, has lived with her family in Shanghai for over three years. In the interview she explains how she fosters Chinese-Austrian relations, how to live and study in China, and how she herself doesn’t have to do without blue sky in Shanghai.

News+Stories: Clara Fischer, the liaison office of TU Graz will be officially opened at Tongji University in Shanghai on 12 April. What’s in the programme and how are the preparations going?

Clara Fischer: Preparations are in full swing and everything’s running very well. We’re delighted that President of the Senate, Yang Xianjin, from Tongji University and Rector Harald Kainz from TU Graz will open the office together. The official hand-over of keys is one of the main items in the programme and an important symbol of the cooperation of both universities which we now hope to intensify through the liaison office. At the opening we’re expecting high-ranking guests, including the Austrian Consul in Shanghai, Silvia Neureiter, AVL CEO Robert Fischer and Alexandra Wagner from the OeAD cooperation office in Shanghai. Apart from viewing the office and celebrating with a lunchtime snack, guests are also expecting a small surprise. Together with Julia Zotter of the Austrian chocolate factory of the same name, I have selected a range of chocolate for a tasting. We’re eager to see how the pumpkin seed chocolate goes down with our Chinese guests.

What activities has the liaison office planned for the coming months?

Clara Fischer: At present I’m making important networking contacts at Tongji University. On top of that I’m planning information events for students and staff at Tongji University to advertise our exchange programme as best as possible. A few days ago, at a shared information event with universities in Germany I represented TU Graz and informed interested students about an exchange. Here in China I’ve had the experience that many students haven’t ever heard of Austria and many who don’t even realise we speak German. It’s time to change all that. And of course I’m always here for our TU Graz students and staff who are staying at Tongji University in the course of a mobility or student programme. I give advice when it comes to questions of the country, people and the Chinese way of life. I plan and organise activities together, such as welcome meetings or Austrian Christmas celebrations. And sometimes I’m simply a link to our home university TU Graz over a good cup of coffee in my office.

How should we Europeans imagine what life is like on the campus of a Chinese elite university like Tongji?

Clara Fischer: Many TU Graz students who come to Tongji are surprised that everything you need to live (and survive) is on the campus. Student hostels, cafés, restaurants, small supermarkets – theoretically you don’t have to leave the campus at all during the semester. All the university facilities are distributed on the campus itself and not in the city.

How many students and staff of TU Graz are currently at Tongji University? And what are their experiences like?

Clara Fischer: At the moment there are two TU Graz students of architecture at Tongji. Both are doing a joint study programme for two semesters in Shanghai. I had an interesting long talk with one of them. Students from Austria benefit academically, on the one hand, from the interesting courses at a Chinese elite university such as Tongji. On the other hand, they garner valuable intercultural experience which you can only pick up from a stay abroad. Many students also make use of their stay to visit other places and countries close at hand which would otherwise be hard to reach from Austria.

Why should students or staff consider a study stay at Tongji University?

Clara Fischer: Tongji is one of the most famous and oldest Chinese universities and the joint study programme of TU Graz and Tongji in the fields of architecture, electrical engineering and mechanical engineering is extremely attractive. But above all, China’s history and (economic) development is unique. Printing, gunpowder, paper and the compass were invented in China. Life here is exciting and varied. It’s exciting to immerse yourself in the traditional culture in Shanghai, and at the same time to experience the modern underground system, international flair, the infinite variety of architecture and the impressive skyline with the world’s third-highest tower. There’s no other city quite like Shanghai and after staying here you look at every other city through “Shanghai spectacles”. But to know how it is, you have to experience it yourself.

You’ve been living with your family in China for three years. Tell us a little bit about your day-to-day life.

Clara Fischer: I’ve been living in China with my husband for three years and our son was born eight months ago in Shanghai. In the last few years I’ve been working at the Goethe Institute as a German teacher. I’ve met countless Chinese students there who are interested in studying in Germany or Austria. And as head of the TU Graz liaison office, I can now support and promote this in a different way.
My day-to-day life in China is completely different to what it would be in Austria. I usually take a taxi from A to B. The distances in Shanghai are huge – two hours travel time each day here is nothing extraordinary. I have a very nice nanny who looks after my eight-month-old baby during the day so that I can concentrate on my work. At the same time Arthur is also learning Chinese. These conveniences would be all but unaffordable in Austria, but here in Shanghai they’re quite normal. For me here, luxury is western food whose safety I don’t have to worry about. Good, clear and healthy air, green natural landscape and a blue sky – all that is very rare in Shanghai – and I miss it.

What reminds you of your homeland or even perhaps of TU Graz in your office in the Chinese-German house at Tongji University?

Clara Fischer: I’ve got a few photos of Graz and TU Graz hanging up in my office – so I don’t have to do without green nature and blue sky entirely. And I’m getting a red carpet with a TU Graz logo on it in good time before the opening of the office on 12 April. That should attract attention and set the right tone at the entrance to the TU Graz liaison office.

Clara Fischer has headed the liaison office of TU Graz at its strategic partner university, Tongji University, since 2016. Clara read Romance studies at the University of Vienna and has enjoyed travelling abroad in many different countries to improve her language skills. She’s currently learning Chinese. Clara Fischer made teaching languages her profession, recently as German teacher at the Shanghai Goethe-Jinchuang Language Centre. Clara Fischer has been living in Shanghai with her husband and son for three years.