Choosing a degree programme: 7 paths to follow at TU Graz

They want to improve people’s lives, use their creativity or understand the world around them: seven students explain what they find so fascinating about their technology or science degree programme. 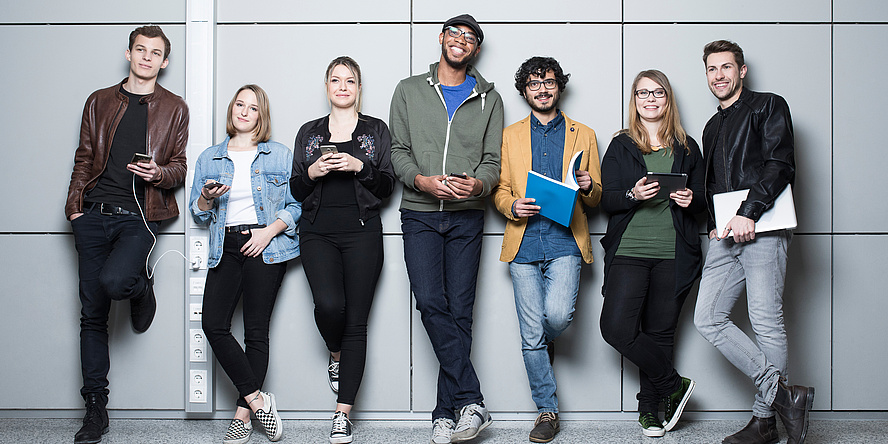 (From left) Lukas P., Johanna, Sara, Benedict, Leonardo, Verena and Lukas D. all study at TU Graz – for a variety of reasons.

For the third time, this winter semester TU Graz invited bachelor's, master's and doctoral programme students to take part in the BeTheFace campaign as the “faces” who would represent their faculty for a year. The News+Stories editorial team wanted to know why these seven faces had chosen their particular programme and what motivates them.

Johanna always enjoyed sketching and drawing buildings. “I wanted to be an architect from a young age, but people always said that technical degrees are much too difficult,” explains Johanna from Wolfsberg, who is half way through her architecture degree. And she’s happy that in the end she gave it a try: “Right at the start I wasn’t really sure if I was suited to it – if I would be able to complete the programme. But after a few weeks I realised that it was perfect for me.” Johanna wants her work to have an impact on people’s lives: “A positive one, hopefully. It’s a big responsibility of course, but a very nice one to have.”

Despite specialising in IT at technical college, Benedict sees himself as more of a “geometry kind of guy”, and so opted to study civil engineering. When he goes on to take a master’s, he will probably focus on road construction, traffic engineering, the water sector or wastewater disposal, because as Benedict explains: “You can help lots of people by making small improvements. We take fresh water and good roads for granted here. In Nigeria, where I come from, there’s plenty of room for improvement. Graz appealed to me because it’s a similar size to Linz,” where Benedict lived for 10 years. He also likes Graz’s large student population.

Master’s student Verena already knew she wanted to study chemistry while she was at school. “Maybe because I had a really good teacher,” she says. The student from Hollenegg-Schwanberg believes that her studies will open up many career opportunities and wants to go into industry. She has specialised in inorganic materials and chemistry during her studies, with a particular focus on batteries. “Putting your lab coat and glasses on and doing experiments with chemicals is great. Chemicals help to explain all of nature’s processes,” she enthuses. And practicals in the lab help her to understand the theory covered in lectures.

Lukas – who languages didn’t really appeal to, apart from English – chose his degree by a process of elimination. He knew it had to be something science-related, though. “I couldn’t see a reason not to do biomedical engineering,” Lukas – who was born in Graz – tells us about his pragmatic decision. Even though he had to work hard to pass physics and especially maths in the first semester, he’s still very happy with his choice. “I like the strong technological focus involving programming and electronics, but also the fact that I can dig deep into biology, anatomy, chemistry and molecular biology at the same time.”

“In electrical engineering, you’re always discovering new ways to build, improve and invent things. Things that some people can’t even imagine – and for this I need electricity,” explains Sara. “You take a tiny chip and use it to make an everyday object.” She is a creative, do-it-yourself kind of person, who is fascinated with her chosen subject and is pleased with the excellent career prospects she has. Born in St. Pölten, Austria, she began her studies in Bosnia, where her parents are from, but in the end she decided to move to Graz. “People from many different countries come here. And we all have one thing in common: TU Graz.”

“You can describe every movement of air, every rainbow, and every single natural process with mathematical formulas,” explains Lukas, who sometimes sees the world in formulas. After leaving school he decided to study mechanical engineering, his specialist subject at technical college. “I thought there was more to discover in the world of machines.” The bachelor’s student from Vorarlberg, Austria, who likes to be “very precise”, wants to work in energy technology because he thinks “it’s an important topic for the future”. He felt immediately at home in Graz from day one: “People in Styria and Vorarlberg are very similar. Down to earth, quite laid back and a little bit grumpy.”

“When I was six I wanted to be an actor, then an inventor, and then a mathematician. I always wanted to invent things. Now I come up with theorems,” is Leonardo’s explanation of how he found his way to mathematics. He studies origami theory and calculates how flat objects which are folded over a curved edge behave – perhaps in future he will be doing the calculations for satellites or stadium roofs. “But I’m no good at making origami swans!” he says, making sure he doesn’t raise any false expectations. Born in Rome, Italy, he has always had an interest in mechanical things and chose TU Graz because of its excellent reputation. “And because the architecture along Sporgasse is so reminiscent of Italy.”

Advice on choosing a degree programme

Every year TU Graz’s Communications and Marketing Department looks for seven students who would like to take part in its BeTheFace campaign, with each representing one of one of the university’s seven faculties. These young people become the “faces” of TU Graz for a year.

For more details visit the "Be the Face“ website.

Watch the <media 100169 _blank int-link-external "Opens external link in new window">Video about the „Be the Face“ photo shoot 2018</media>.