Long before the first symptoms appear, biomarkers can provide important information about developing diseases. Research is currently planned in the field of breast cancer at TU Graz. 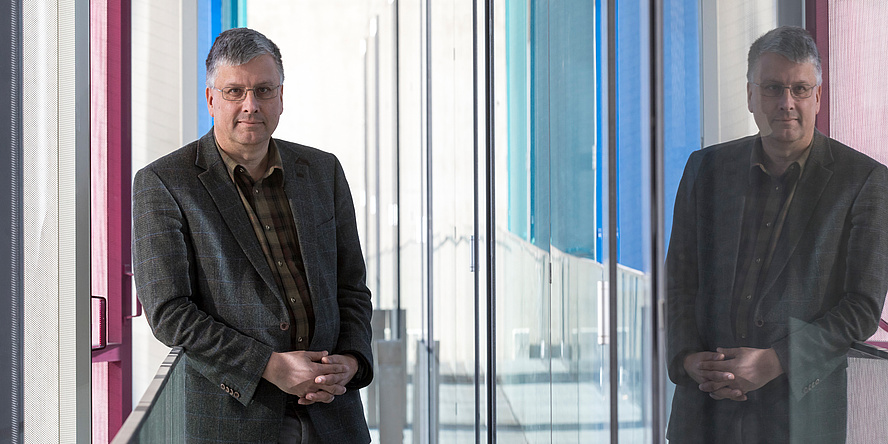 Christoph Sensen is searching for biomarkers in order to detect diseases at a very early stage. (© Lunghammer - TU Graz)

“What would you say if, on the basis of a standardised blood sample taken during the yearly health screening examination – on top of diabetes and cholesterol, you could also be screened for 50 or 60 of the most serious illnesses, such as cancer?” inquires Christoph Wilhelm Sensen in his bright office, several floors above Petersgasse. Both in the lab and in complex data analyses, the TU Graz researcher, along with his team at the Institute of Computational Biotechnology, is searching for so-called biomarkers, by which chronical or infectious diseases can be diagnosed in early stages. They plan to develop fast and cheap test methodes to make diagnoses possible using current standard lab equipment.

Our bodies are constantly working on themselves. In daily processes, our bodies try as much as possible to put themselves back into a well functioning state: cells are broken down in one place and replaced in another. Normally, our bodies do their job without being noticed.

And even in the case of illness. Before we notice that we are sick, our bodies start to send out signals to fight against the illness and to restore the original healthy condition as best as possible. These signals are sent out in nearly all infections, and they are also sent out in the case of chronic illnesses, such as cancer or Alzheimer’s, which are often only noticed when advanced – when they are difficult or not at all treatable. 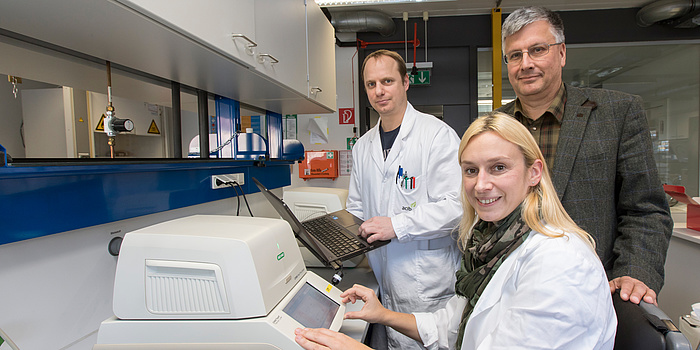 Christoph Sensen and his team at the laboratory.

The controlled removal of tissue – something which takes place every day all over the body – is called apoptosis. DNA molecules are released from disintegrating cells, enveloped in little bubbles, and migrate into the human blood stream. These small DNA packages can be absorbed by other cells and thus used as signals to trigger something in these receptor cells. For instance, how to combat a developing disease.

These molecules can today be isolated from the blood, examined and traced to their region of origin by DNA sequencing and bioinformatic analysis. “The human genome comprises some three billion base pairs – and these small DNA molekules about 200 to 1,000. With bioinformatics studies we can tell exactly where they come from and which disease the body is developing,” explains Sensen. And not only that. These investigations can also reveal the type of disease, its progress . “So it’s not just a case of knowing that some kind of cancer is growing somewhere in the body,” explains the researcher. “Using this method of diagnosis, we hope to be able to say that it’s breast cancer in precisely this stadium and whether it has spread, and built metastases. Because of successful research in other diseases, we hope to in the future be able to diagnose this at an early stage of the disease when there are still no physical signs and all other diagnostic procedures draw a blank.“

Christoph Wilhelm Sensen of TU Graz together with Berthold Huppertz of MeUni Graz is currently fundraising for such a project. The aim is to be able to define biomarkers for one of the most deadly breast cancers and thus develop a sure and early diagnostic tool which can then be used in a routine investigation. Outstanding results have been achieved by other research teams with a few other kinds of cancer.

A donation appeal has just been launched by MEFO (association for research promotion) at MedUni Graz for this research project. If you would like to financially support research into breast cancer biomarkers, you can get all the important information at Mefo´s website.

The Institute of Computational Biotechnology has already achieved great success with sepsis – also known as blood poisoning. “We can now recognise sepsis three days before the first clinical signs appear. This means that in the future we can save lives using our diagnostic method,” says Sensen. Here, too, they are working closely with the Medical University of Graz. But it could take quite a while before these possibilities are actually put into practice. “Usually five to ten years of investigations, clinical trials and expert opinions are needed before approval is granted,” the scientist explains. 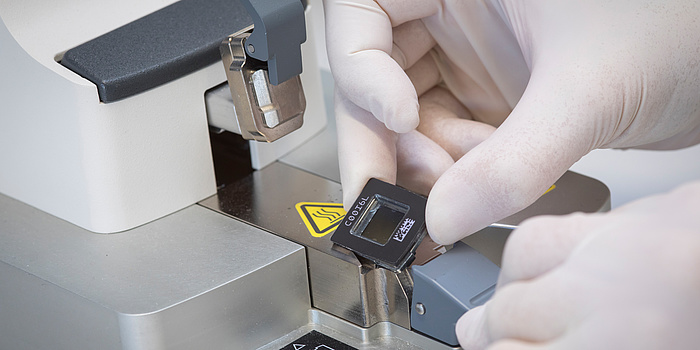 The researchers hope to be able to detect breast cancer in an early stage with a new diagnostical method.

Through this work we would like to build a bridge to the Graz Biobank, where human tissue samples are gathered and made accessible for research,” explains Sensen. “The next subject we are hoping to look at is pre-eclampsia – pregnancy poisoning.” This illness affects predominately older pregnant women and women, who are pregnant for the first time, and in the worst cases can lead to the death of the child or even of the mother. When recognised early, it can be treated very simply with aspirin. “In this case, early detection is incredibly important because, due to all sorts of possible side effects, you cannot simply administer aspirin to every pregnant woman as a preventive measure,” he explains.

Biomarkers function in all mammals in a similar way. This is one reason why in addition to research on human diseases, the Institute of Computational Biotechnology also specialises in diagnostic procedures for domestic or farm animals. At the moment a test for paratuberculosis in cattle is being developed – an until now incurable and highly infectious bowel disease of ruminants, such as cattle, which possibly plays a role in the chronic inflammation of the stomach and intestinal tract in Crohn’s disease.